Although, I must say that Brave is a very good browser as of my experience. It has a very good browsing speed, good privacy security, nice versatility of features, but there are still some things which are lacking in Brave including the auto page translate feature. This feature was there in Chrome and it is really important for me and many users. Whenever I go to a page which is written in some unknown language, the auto translate feature is really necessary at that moment to translate the page to English, but the feature is lacking in Brave which is really disappointing indeed. It is a very basic feature which is there in every web browser excluding Brave. Many people have complained about this feature but I don’t think Brave does seem to care. When I took a first glance at the browser, I thought that this may be the best browser for me, but now I think, Chrome was better as it at least had an auto translate feature in it. Will request you to add an auto translate feature when so many people are already demanding for it.
Thank you for your hassle which you are going to take.

Just for clarification, you do know that you can translate pages using Google Translate extension in Brave. Do you have some specific reason for not using it other than privacy, sending data to Google etc.

And yeah auto-translate feature would be cool, I don’t know if it’s already there. @Rethanis

Brave doesn’t provide such an option as of the moment, unfortunately. Users are only given the opportunity to install a third-party extension (Google Translate).

Genuinely, i find it a glaringly missed opportunity for them not to have addressed this with the last update! The extensions okay, but there’s only so much someone can take having to hit the top right “translate” button before reverting back to Chrome as the main browser.
I really want Brave to be my daily driver but the lack of what I feel is a simple and necessary feature has me shuffling back to Googs…

Yeah. This is really a deal-breaker for those of us in language limbo. I have Google Translate extension installed but have to manually translate pages and it takes 3 clicks to do that each time. Every time I go to a new link on a foregin langauge site, I have to do these 3 clicks. UX hell. Not sure why this would be so hard to implement auto translate. Let’s make this happen. I want to stay Brave

You know, that is not what you call as auto-translate. it is a kind of semi-auto-translate feature which is not what I want. It takes a lot of time and 3 clicks to translate a page in brave which ain’t worth it, and suppose if you have all the pages in a different language in a website, will you really keep on translating the page every time you go to another? Of course no, it doesn’t make any sense.

Edit: I have stopped using brave around a month ago and now I have shifted to Edge. Reason being that Brave also had a lot of other problems, which I cannot explain in detail right now. In short, Brave has a lot of things to improve on for now.

I do genealogy in several languages, as much as I like learning languages, when doing research it is much faster to have auto-translate. Since Brave seems to be a fork of Chrome or at least uses the apk, then implementing “the always translate” feature that the chrome extension for Google translate uses, should be easy. I installed the extension, it worked on the first page of a website, but failed on other pages of the same site.

I found this extension https://github.com/FilipePS/Traduzir-paginas-web
It works very well for me, I also use it on firefox and I see that it works on chromium as well

Other browsers already have the auto translate option and even Vivaldi has it https://vivaldi.com/blog/vivaldi-4-0/

Then, you will get some boring notification to “install Google translate extension”. You can remove this in few clicks:

I’ve also been hoping for an auto-translate option on Brave! Since I’m primarily a mobile user, I can’t easily install a web extension to translate the sites I visit on my phone.

Even an option to manually enable translation via the ⋮ drop down menu (similar to the one in Chrome, shown below) would be great. 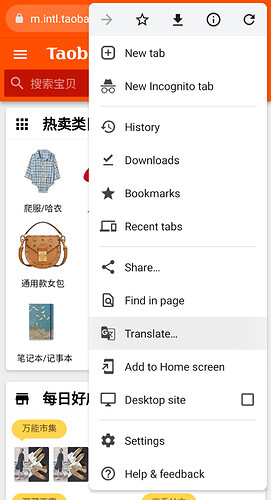 Thanks for this. It works. Let’s hope it continues working!

If you want that feature, you’re gonna need to enable developer mode and load extension manually. 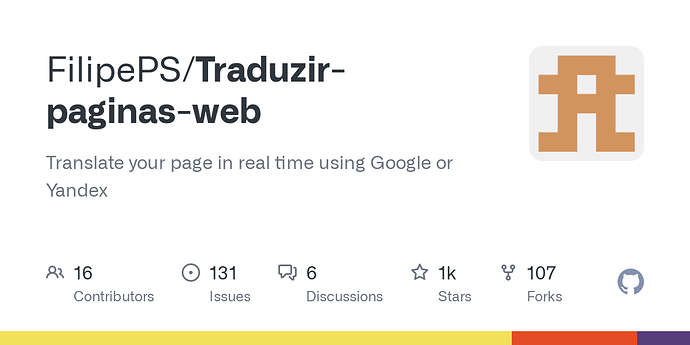 This is awesome and works brilliantly

Wow!!! https://github.com/FilipePS/Traduzir-paginas-web is a WONDERFUL plugin!!! Thank you for sharing! I’m in utter bliss now with my research efforts.

Don’t forget to set yourself up to watch for releases on GitHub: 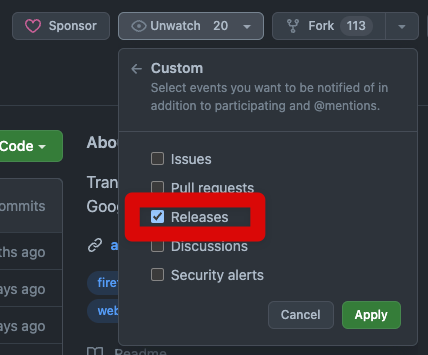 ## Description We have a translation service that is available in Nightly 1.42….x which can be enabled via brave://flags/#brave-translate-go Some specific issues have been captured and labeled with [brave-translate](https://github.com/brave/brave-browser/issues?q=is%3Aopen+is%3Aissue+label%3Abrave-translate) This issue is intended to track work required before we can release Brave Translate ## Test Plan https://docs.google.com/document/d/1hADNy20_UIXMe2vXFrTFfpB5NCGK6hBtNVXJBYIJLds/edit 1. No `UseBraveTranslateGo` feature (Desktop) old bubble to suggest Google extension is used; (Android) no translate UI or attempts to translate pages; 2. (Desktop) `UseBraveTranslateGo` + enabled Google Translate extension "Google Translate extension" should be used instead of the build-in translation 3. (Desktop) Migration “Offer to translate pages that aren't in a language you read” preference should be enabled at the first launch with UseBraveTranslateGo feature (if was disabled before) The preference is now unsynced => old version users shouldn't have the preference changed. 4. (Desktop) Enabled UseBraveTranslateGo feature In general, the behavior should be the same as in Chrome. The difference: - limited language support; - no google icon; - another engine to translate => translated text is expected to be different. What should be checked: - foreign language detection (the bubble to translate should be shown when visiting a site in a language that is not listed under settings > languages) - manual translation from the bubble/context menu. - “Always Translate" for language (enable “always translate <language>” in bubble and navigate to a site in <language>) - never translate option for language/site - UI elements interaction (i.e. change the translate direction/revert/etc) - Enabling/disabling translate on brave://settings - Translation from the context menu when page language wasn't detected ## Brave version (brave://version info) Target release 1.43.x ## Version/Channel Information: - Can you reproduce this issue with the current release? n/a - Can you reproduce this issue with the beta channel? n/a - Can you reproduce this issue with the nightly channel? n/a ## Other Additional Information: - Does the issue resolve itself when disabling Brave Shields? n/a - Does the issue resolve itself when disabling Brave Rewards? n/a - Is the issue reproducible on the latest version of Chrome? n/a ## Miscellaneous Information:

Actually, already exists (for desktop anyway). Just not 100% complete as they are missing some languages.

Okay, so I went digging and learned I was wrong about coming soon. More like, it already exists. (at least on desktop). I’m not finding mobile version so will check in later to see if anyone can inform when/if that’s coming. I think that’s what I saw on a release list somewhere, but I don’t know where I was looking when I saw it. If you’re on Desktop and want it to translate, then go to brave://flags and set Enable internal translate engine (brave-translate-go) to Enabled. [New Tab - Brave 8…

Yes, I just mean it would be an actual ‘released’ feature not hidden behind ‘experimental’ flags – I think that’s fine for tinkerers, but maybe not for general use in case it gets severely broken or removed. But per the GitHub issue it looks to me like we should expect it in a Release soon.

If anyone has played around it, can anser my questions just for curiosity.