Brave is (officially) on Reddit. I'm on Reddit, too. But YES, I (desperately) want to ALWAYS "Open www.reddit.com links with Brave" 😔

I have 1 difficulty with LastPass pop-ups (see the thread at the bottom) and another with reddit.com - It doesn’t “respect” my decision to “always” open reddit.com in Brave, and constantly asks the same darn thing: 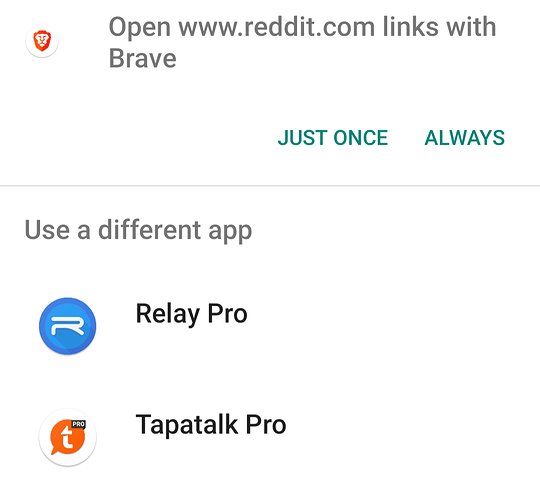 Why in the name of God?

Can this be unraveled w/ reddit.com crew? By contacting them, as one company to another?

BTW, Reddit anyway has ANOTHER annoying popup but its server-side and happens even in Chrome (because they’re blatantly promoting “official” Reddit app) & couldn’t be disabled in both Chrome&Brave:

I’m speaking about the pop-up (question) that happens before (on click of Reddit or Reddit AMP links), not that second one (on successful page-load.) where it incorrectly names Brave as Chrome

If I choose Brave & choose “always” - always means always and I don’t want to be asked again and again and more: again.
Logical, right?

Same as LastPass annoyance - Chrome’s behavior is different. Chrome “understands and follows my order” to constantly open Reddit and that’s what bugs me the most. If Chrome gets treated like that, why doesn’t Brave users get treated the same?

Definitely, Reddit popup and LastPass pop-ups (see below) are - most annoying (for me at least) and they kinda affect my “user experience” negatively (who likes unnecessary popups)… But I’m quite sure this isn’t Brave’s fault…

… Although I’m a strong believer in communication, lol; Meaning - Brave should, in my opinion, speak with both companies (Reddit, LastPass) for the sake of all of us…

Can Brave team please contact LastPass & resolve this pesky "Are you sure you trust Brave" popup? Mobile Support

It’s site-independent (occurs on all sites) This doesn’t appear in Chrome (for Android) It’s like LastPass doesn’t even comprehend Brave as safe or whatever. Im also sure (lol

) that this is more of an #LastPass case rather than Brave bug… but still: Having in mind that many of us use both La…

& #Love at @steeven & @Mattches - if possible, please include/tag folks who could contact those two companies I mentioned and simply arrange same treatment 4 Brave as Chrome gets