As the title says, I see that my February rewards on my Rewards page says:

However, this is what I had on my screen two days ago when I last used my computer: 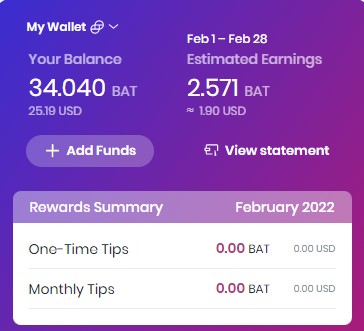 This is a difference of 0.845 BAT. I understand that their could be some discrepancy like last month. Has anyone seen anything similar posted?

It basically means that you earned from it, but the ads aren’t reconciled by the time the payment period starts. So for example, if you earn .05 BAT at the end of the payment period , that BAT may take a couple days to be reconciled (maybe “processed” is an easier to understand term) — which means it doesn’t actually count towards what you earned this month and you’ll instead earn it next month.

So the estimated earnings you’re seeing up until this point have included these BAT that were not yet reconciled — so when your final payout balance for the month is calculated, its a mismatch between what was estimated and what is actually earned. The issue I linked to above resolves this, such that it only shows fully “processed” ads/BAT.

thanks, @steeven I appreciate the feedback