I think the idea is more than great. There are indeed many extensions for translation, and Google Translate is not the best, although it is the most popular.

In addition to automatic translation, A Brave Translator would also be able to translate typed words, documents, and subtitles, and the translator’s target language would be set independently of the browser language.

I think it would be best to create Brave Translator with the help of companies like Smart Link Corporation (ImTranslator), Lingvanex, Gikken (Mate Translate), and Free Translations; but not with just one of them, but with all of them together. The Vivaldi Browser with the help of Lingvanex created its own translator which is not excellent, but is very good.

Then we can think how much better the “meta-translation” (meta - like meta-search) will be by cooperating with multiple companies, using the crowdsourcing method! Later, as the translator is further developed, the services of such companies, like Amazon and IBM Watson may also be used.

It should also be said that the translator is open source, so that advanced users can further improve it and correct the errors that machine translators make.

The brave translate already exists and has been added recently, and the additional features you have specified will hopefully be added in some near or distant future. The companies you mention are a great choice because they offer much more than just translation.

I would, for my part, ask the authors of brave to add the option of automatic detection of the source language and add some more variants of those already available, such as Serbian (Latin), Bosnian (Cyrillic), Mongolian (Traditional), etc.

Best regards and best thanks

I know that it already exists and therefore it needs to be further improved, which The Brave will certainly do. So, apart from the translation itself, some more advanced tools that will make Brave Translate even better can be OCR, Speech to text and audio & video transcription.

This multiple translator can help both us who do not want to add more browser extensions and install apps, and Brave to, as far as possible, make their services more accessible to all users around the world, including those who are poor in English (not only English, but English is a primary language in the computer technologies), and even professional translators who for various reasons are unable to pay professional translators, grammarians and proofreaders for your languages; however pretentious that may be on the topic.

Now this exists, but lacks feature to translate only selected text, not the entire page. Hope this will be added too.

Why it does not work on this forum itself?
I am not able to do translations on this brave forum.

For eg., there is a japanaese section on this forum and it does not get translated to English https://community.brave.com/c/japanese-support/148, even Spanish-to-English Transation. Nothing works.

Quite odd if it does not work on Discourse Forums.

I’m glad that BA is using Lingvanex’s services, but these other firms mentioned by someone also offer a lot of interesting and useful things.

Yes. It can be solve more problems.

I don’t know if this applies to all languages, but at least I often get a notification that the page is impossible to translate. A brave Translate is a good thing that promises a lot for now, but there is still a lot to do on it.

Translate just flat out doesn’t work. What’s the point in rolling it out? I tried translating from French to English on LeParisien.fr and LeFigaro.fr (two major French news publications), and the only thing that happens is the translate button gets highlighted, but no text is translated. This is very frustrating, to say the least. Oh well, back to Google.

I just went to both sites and clicked English and waited a few seconds, for the server to look up the translation, then the page translated.

When you write that you clicked English, you lost me. There’s a translate button in the URL bar, but the option to choose the default language to translate to is within settings. I’ve waited much longer than a few seconds. It doesn’t work even after extended periods. Could it be my operating system to blame? I’m on Win 7 64 bit, but a fully up to date version of Brave (Version 1.45.118 Chromium: 107.0.5304.91 (Official Build) (64-bit)

Under the Preferred Languages setting, I have Use Brave Translate option turned on. When I was on those pages, the option to read the site in French or English came up, and I clicked on English.

Thanks. I get no such prompt, and I have Brave Translate toggled on in settings and the box checked by “offer to translate pages in this language” . I have no idea what’s keeping it from working for me. 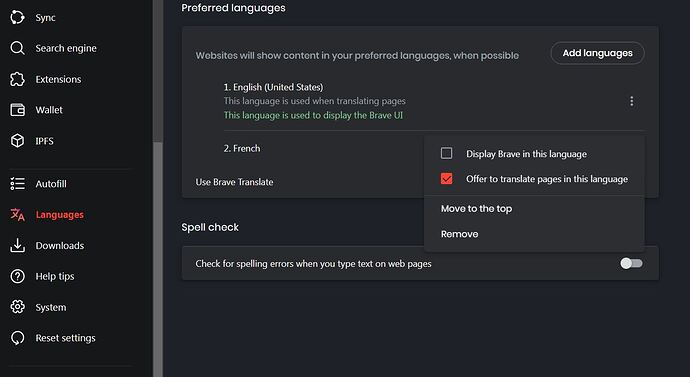 Ok, last post from me here. Kind of silly. Problem has been solved. It was simply that the Google Translate extension was keeping it from kicking in. I’ve disabled it, and now when I click the Brave translate button, it gives me the option. Sorry to flood the forum with unnecessary posts, guys. Thanks, Brave team. 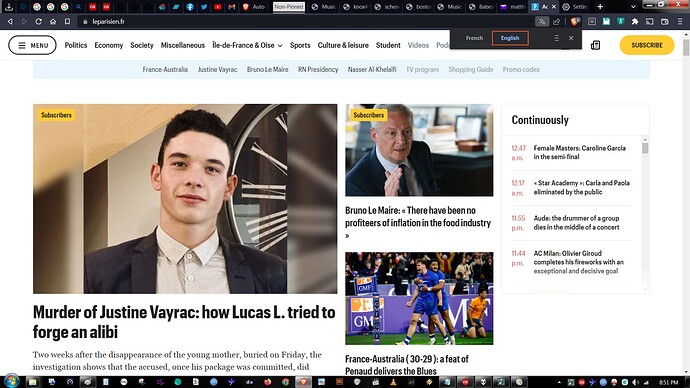 Ah yes, I had to do that a while ago. I forgot about that step. Sorry.

Let’s add that Brave Translate should work without problems in HTTPS mode, so when the Options “Update connection to HTTPS” and “always use a secure connection” are enabled.

The Brave Translate is not bad, but it should be much better.

I would prefer that it could be opened separately as an item in the browser menu or context menu, rather than appearing as a pop-up alert and that the target language of the translator does not have to be the same as the one in the browser (e.g. to translate from English, despite English is the browser primary language).