Android with Gemini support when?

When is Brave going to support Gemini withdrawal support on Android? Uphold integration has not been working for last 2 years and all my credits on my old phone is going to go.

Brave team seems to be shockingly slow in delivering the features. Unless it goes in by March, I’ll uninstall it forever and will tell all my friends and colleagues to do the same. I don’t know anyone so far who got BAT for their android phones.

I also want gemini support with brave android cause uphold literally block my account LOL also they’re not allowing me to withdraw so.

When is Brave going to support Gemini withdrawal support on Android?

Soon. They aren’t really telling us how soon is soon, but it’s ready. If you want to track some of the things they are working on or made available, you can go to https://github.com/orgs/brave/projects/28#card-59568971 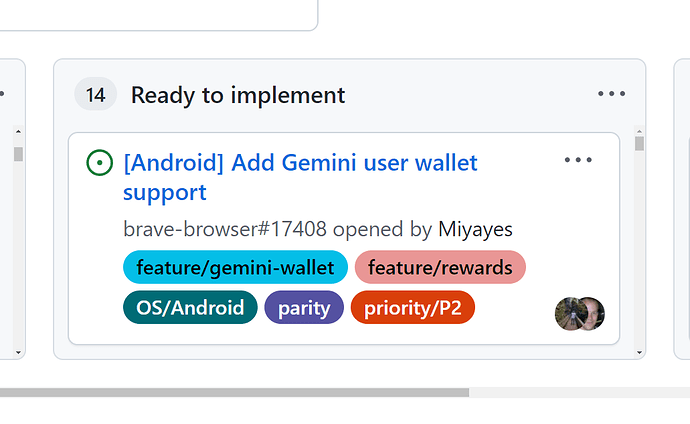 Now, it still has to go through QA and all, but I’m guessing we may see it within the next 2 months or so along with some of the other planned changes, such as the removal of the wallet limit cap.

I do want to note though, I haven’t officially learned their steps there. It goes Planning > Ready to Implement > In Progress > In Review > Done

So if it’s only phase 2 of 5, then it may not be as soon as we’d hope. But at least we know they are working on it.

Any updates from the team on this?

I do wish the developers would give us a hint for when this would be released on android. Not all users are comfortable with using nightly for obvious reasons. Not all users are comfortable with keeping high amounts of BAT in their wallet which could be lost in a glitch. People in the UK can’t get uphold as they are not accepting new users.
Furthermore, self tipping is “not allowed” so people are stuck with high bats and not being able to do anything with it.
Though it is Done on github, it is not fully done. Would be nice to see developers get involved in this rather than someone from the community (no disrespect)

Official date of v1.38.x is 26 April- https://github.com/brave/brave-browser/wiki/Brave-Release-Schedule. On Play Store it can take a week or 10 days after that. Early May would be a realistic estimate.

Yeah, I’m not delivering my tokens to Uphold. They are shady ASF
I’ve been holding BAT on Android waiting for Gemini to be available. Hope they don’t take to much longer

Yeah, Upholds sucks so badly. They approved my KYC, but minutes later they put my account under revision. Few days later they banned me forever from their platform, without even giving the slightest explanation.