How to get Amazon Prime movies to play on laptop in Brave web browser?

When trying to play a video I get: “We are experiencing a problem playing this video. For assistance, go to …Amazon…error/7031”

Widevine does not seem to be installed. How do I install it? It won’t install automatically. There is no sign in address bar that says the plugin is missing.

I tried doing some of the things that other people posted but they didn’t work.

@Grammy,
Can you try visiting Netflix or Hulu and see if you’re offered to install the Widevine plugin for those sites (note that you don’t have to have an account or even login to those sites to illicit the prompt)?

I tried Netflix and just now Hulu. They both want you to do the free trial which I don’t want to do. No option popped up to install Widevine just by going to those site.

@Grammy,
Can you go to brave://components and tell me if you see Widevine listed on this page? 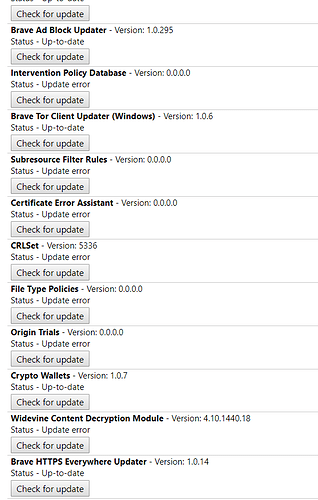 @Grammy,
Un/reinstalling the browser may do the trick – but if you’re willing, I’d actually like to suggest you download our Brave Developer build and see if you receive the prompt as intended. Note that you can download, install, and run all Brave builds on the same machine and in parallel without them interfering with one another.
Try downloading/installing Brave Dev and revisit any of the sites listed above to see if your’re prompted to install. Also note that in Dev, you can see our solution to this particular issue take shape – go to Settings --> Extensions to see that we’ve added a toggle to control this behavior: 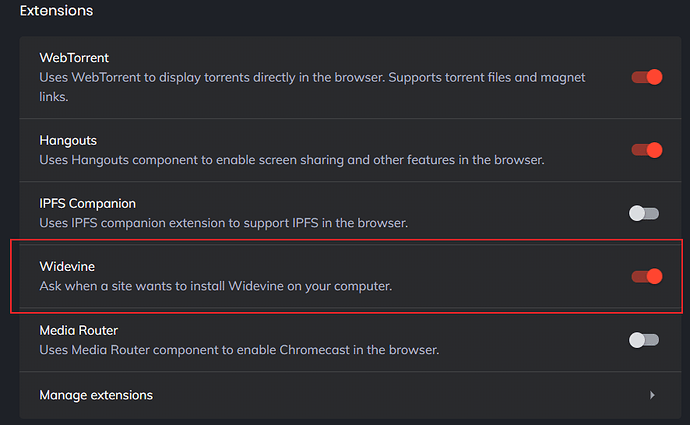 Hey…Installing Brave Dev worked! I can watch Amazon videos again. Thank you. So, this is a known issue with the other Brave I was using? Can I keep using Brave Dev instead of the other one?

@Grammy,
That’s up to you – it’s very likely that the issue will be fixed in Release build in the next update. Until then – or after – you’re good to continue using Brave Dev in it’s stead. It should be noted that Dev, Nightly, and Beta builds are all considered “less stable” than Release and compared to on another – so you may potentially encounter other issues that aren’t present in Release build. That said – I use Brave Dev as my daily driver and have for months and it’s performed more or less at parity with the Release build.

Thank you. I’ll give the Dev a whirl.