Why Is It So Hard For Browsers To Support Saving Sessions?

I think its safe to say that people REALLY want the ability to save sessions (or at least open where they left off) - not in some indifferent and insufficient way that falls far short of what that entails - in the true sense of what it means to open where you left off. That means EVERY window and EVERY tab in EACH AND EVERY one of those windows restored to PRECISELY what it was when the browser was closed. That means no matter whether it crashed, was closed properly, was closed in any of the ways that it can be closed properly, whether the windows were closed all at once of one at a time, whether the computer was restarted or not restarted - NO MATTER WHAT THAT THE PRECISELY EXACT STATE OF THE BROWSER BE PRESENTED WHEN IT IS OPENED THE NEXT TIME.

If you take a general, overall survey of that’s being said on the web you can see that this issue has been brought up in every conceivable way for nearly every browser that has ever existed (certainly the popular ones) and goes back for YEARS! Over and over again without ceasing the people cry out for restored session and are either ignored, gasslighted; or, if they’re lucky enough, given some mediocre solution that does not provide what is needed but instead only adds to their frustration.

No matter where people post (they get told they’re posting in the wrong category and their post is removed). No matter how many times the community posts about it (they are ignored or dismissed). No matter how long they persist (literally decades in this case - in regard to this particular topic) - nothing is ever done.

We need a real solution. Many of us use our computer in a manner that we need the previous session to be available, in-tact, completely, and exactly as it was (including both tabs AND windows) or it causes them a massive problem!

Can someone, somewhere, with some browser - any browser (but Brave is the best) - just take the need seriously and create a REAL, robust, and comprehensive solution - and put this issue to rest? It can not possibly be so hard to do that.

Pardon my ignorance because I’ve never used the feature but isn’t the “Continue where you left off” exactly that feature? 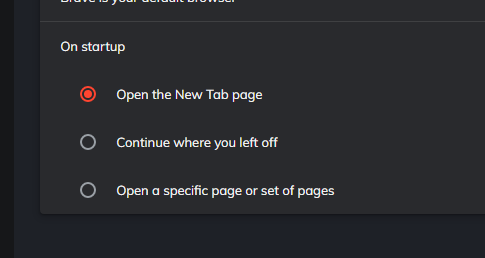 I myself personally use Tab Session Manager extension because I don’t want to restore the tabs automatically when I open the browser but I do want a comprehensive history of my previous tabs so I can restore it should I want to.

then re-open the Browser, it works, of course most people close the windows one by one, so Brave will restore only the last window that was closed, but you can see other windows closed by going to ☰ → History and it will show you the windows and what tabs were part of it and then you can use restore window button or using Ctrl + Shift + T, a shortcut which also works to bring even older sessions that aren’t shown in the UI.

Of course, if you want more control over things, you can use an extension, I like to use Tab Groups Extension, because it has a nice feature to group automatically but also you can save groups, same with enabling flag brave://flags/#tab-groups-save to also save groups natively, so you don’t need to have windows opened with tabs you won’t use when you can save them and close them.

If you properly Exit the browser or the Browser crashes or closes unexpectedly, it should restore everything the way it was, but even if you have Open the new tab page, but even you still have access to older Sessions as well.

Seems like Google never really cared about showing sessions in the history page which would have been more useful than the journeys page.

Do you have that problem with Brave? I have updated probably dozens of times which requires a relaunch and I don’t have any problems with the state my current tabs being restored. Maybe if you have an issue with a certain website or page you would get better feedback.

In addition to what is proposed abuve, this might also help.

I imagine someone has already mentioned this, but make sure that Brave is up to date… but, also, enter settings via the hamburger icon in the upper right hand corner, the go down to ‘settings’. Make sure “Continue where I left off” is selected. You can see it here, located on the landing tab of Brave settings. 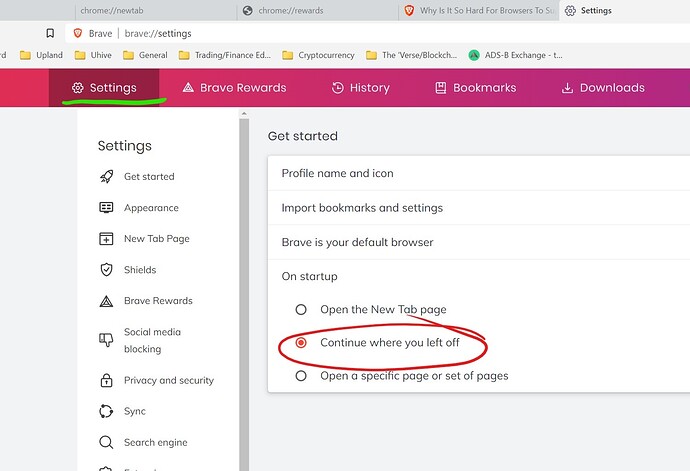 I would have thought that setting would work but it seems it does not save/reopen all windows. I have that setting right now and it reopens one window.

Sorry for the rant btw. I guess I was a little more irritated than I realized. Probably not a good way to start out around here.

I guess I think that this sort of thing ought to be part of a browser’s core functionality. And, tbh, I don’t see why it would be that hard to implement.

I was looking at this plugin: Session Buddy. But I see a very, VERY alarming review there and I makes me hesitant to install it (see screenshot).

I used tab session manager with firefox before. It does the job but there were some things I didn’t like about it (caused freezing and crashes).

I just wish browser makers would consider session management as core functionality to be included with the browser. 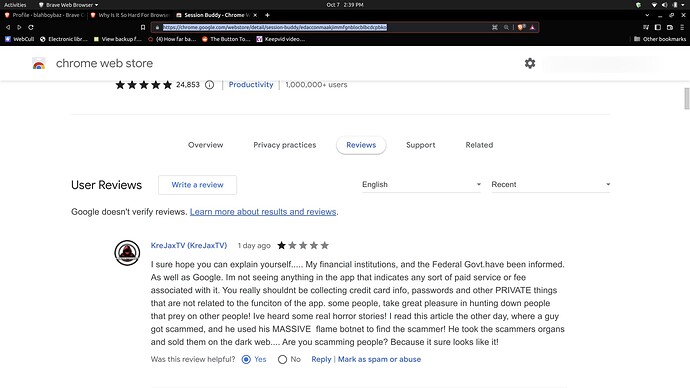 what the hell! The lengthy, arduous reply I was just editing disappeared when I clicked the save button.

The setting works. I was closing the windows wrong but if you use the exit option in the menu it works. Even put the windows in the desktops (ubuntu linux) that they were in when I closed it.

I was looking at this plugin: Session Buddy. But I see a very, VERY alarming review there and I makes me hesitant to install it (see screenshot).

It’s not like people can lie in reviews and say pretty much anything.

I used tab session manager with firefox before. It does the job but there were some things I didn’t like about it (caused freezing and crashes).

Dunno about Firefox but Tab Session Manager has been one of the most out of the way extensions I’ve ever had on Brave / Edge. It just works in the background and has never bothered me in way of slowdowns and crashes, and I use it on a beat up old laptop.