Why is brave browser restricting people from using custom extensions?

I’m trying to install an extension by dragging and dropping a .crx file. But for some reason, brave (which I’m pretty sure is supposed to be free to use/safer than chrome) doesn’t let you enable custom extensions. Why? First, my themes start to glitch out because of brave, now this?
This is really low iq (for some low iq reason, i can’t use the word stu p1d) and I hope this feature gets removed. 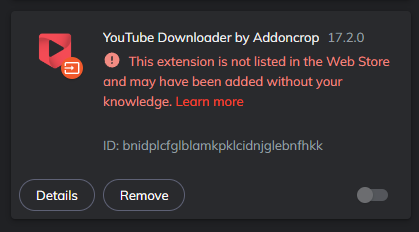 Unlikely, possibly a bug on your end or on brave’s end.

Just two days back I installed custom extension via .crx file. It uploaded correctly to the brave browser and even auto-updates itself.

Look up if any antivirus program on your OS is doing it.
.
.
.
.
Lookong up the inage once more, just enable it by turing ON the toggle. It is blocking you from turning On the toggle, then follow above steps.

Downloading a crx file fails with CRX_REQUIRED_PROOF_MISSING on v1.40

## Description There are a couple of extensions that I use and are not in the …chrome store, for unknown reasons. So, I download them and I install them manually with the procedure described below. But on v1.40, brave fails to even start the download and pops the error described in the title. ## Steps to Reproduce 1. Find an extension that is packed as a crx file, e.g. the one for libredirect 2. Try downloading it and notice the message on the screenshot below. ## Actual result: This error comes up and the file is either not downloaded at all or deleted instantly after download. Downloading it from firefox or with wget has no issues. ![2022-06-24-202210_1280x1024_scrot](https://user-images.githubusercontent.com/5880037/175611785-89985afb-9a45-4485-902b-2bf3f3435bb7.png) ## Expected result: The file should download with no issues and I would install it manually (= go to brave://extensions > enable developer mode > drag n drop the file in the extensions window). ## Reproduces how often: Easily. ## Brave version (brave://version info) ``` Brave 1.40.105 Chromium: 103.0.5060.53 (Official Build) (64-bit) Revision a1711811edd74ff1cf2150f36ffa3b0dae40b17f-refs/branch-heads/5060@{#853} OS Linux ``` ## Version/Channel Information: - Can you reproduce this issue with the current release? Yes - Can you reproduce this issue with the beta channel? Probably - Can you reproduce this issue with the nightly channel? Probably ## Other Additional Information: - Does the issue resolve itself when disabling Brave Shields? No - Does the issue resolve itself when disabling Brave Rewards? No - Is the issue reproducible on the latest version of Chrome? Yes ## Miscellaneous Information: There is another similar issue (#5524) from ~3 years ago, but that one has to do with installing while this one has to do with downloading. The fact that it also happens on chromium 103 makes me believe that some built in security policy is blocking it. It did not happen on chromium 102 or brave 1.39 (or any other previous version).