What should I do to correct the excess of devices which exceeds the allowed limit?

Hi! I have been having the problem for a long time that I have not been able to verify my portfolio in Uphold, I have not been able to add and withdraw in said portfolio since I am getting a message indicating that there is an excess of the limit of allowed devices .
I want to tell you that at the present time I have a PC, an Android phone and a Laptop and in each one I have BRAVE installed.
If there is any excess it is possible, since I am a person whose job is to repair computer equipment and I install operating systems and different applications on them, one of them is the BRAVE Browser, but I have made the mistake of checking my portfolio in Such equipment, the same happens with Laptop and some Cell Phones.
I have also installed BRAVE on my own computer equipment, because I have had the problem that some hard drives have been damaged, both on the PC and Laptop and that has generated me that I have lost a lot of BAT and I have not had the possibility of recover them, due to my inexperience in the matter.
That is why I am writing to you to see what can be done about it.

Hi @JGuiliany, thanks for reaching out!

Please DM with the following information:

This will help to speed up the troubleshooting. Thank you in advance!

Excuse me, what email address am I sending what you are requesting?

There is no fix for this.

So, Brave imposes a 4-Device Limit on all accounts which means Uphold will work only on the first 4 devices you connect.

Another wallet called Gemini just got released yesterday. So I suggest you to make an account in Gemini and get that connected.
[Gemini too has 4-Devices Limit so utilize them carefully.]

Ok, here I send what you requested, this information is on the PC only. 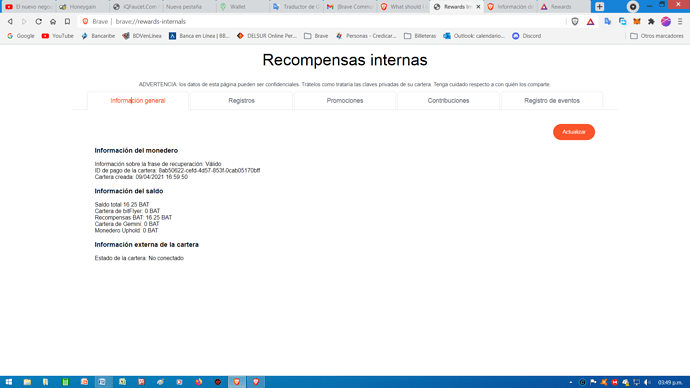 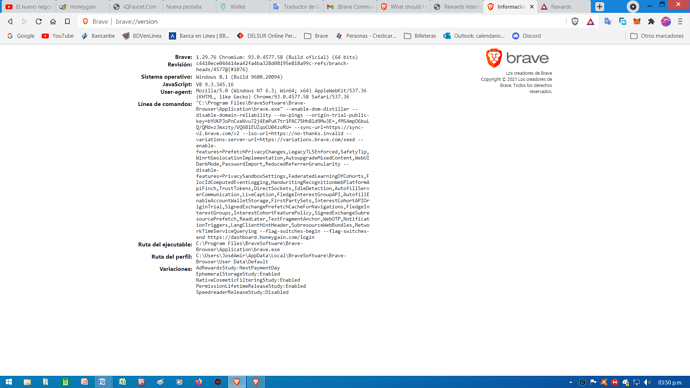 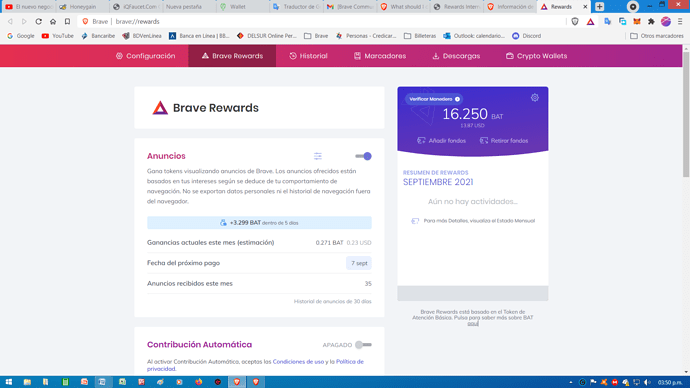 Ok, I understand what you are telling me, the problem is that I do not know in which other computers I have the wallet enabled.

The other problem that arises is that I cannot open an account in Gemini because it is not enabled for Venezuela, I tried to do it and it was not possible.

So keep a note of the number of BATs in each of the Devices you have.

And after 5 days, you will get mail saying “xx BATs has been added to your Uphold Account”. The one that matches with it will be linked and the others won’t be.

Hello ItzMeRajat, I wanted to tell you the following, I really do not know in what way I will be able to take note of what you have indicated in the message you sent me and it is because of the following: currently I only have a PC working, the Laptop does not I have been running for a long time due to a failure that occurred and the cell phone I have made several manufacturer mode reset and I have lost all the BAT that it had accumulated in it and that I could not save since previously I could not from the cell phone register the portfolio because it requested 25 BAT to be able to register it and I lost everything on several occasions, which by the way about a week and a half ago that I restarted it again and at the moment I have 0.198 BAT and so far this month I have 0.005 BAT, in In view of this, I don’t know what values I could take, to compare them and then link them, so I don’t know what I should do to be able to do what you tell me. Therefore you will tell me what to do.

There is one more method.

In the devices which aren’t counted, it will ask you to complete a captcha to get the BATs.

And for the devices which are properly verified, it won’t ask you for any captcha and you will get the BATs directly to your Uphold Account.

Just keep on a look for which all devices asks for a Captcha.

You are going to excuse me Rajat, I have already mentioned the problems that I have had with the equipment and that only at the present time I am using the PC and the cell phone and these equipment are working
with new profiles, because I have made changes to both components and operating systems, in this case the PC and the cell phone I have restarted it from the manufacturer mode and when installing
Brave the profile starts as new because I have not had a way of recovering the previous, Now as you are going to tell me that the devices that are not counted, it is going to ask me to complete a captcha to obtain the BAT. And for devices that are properly verified, they will not ask for any captcha and will get the BATs directly to your Uphold account. Just look for all devices to request a Captcha, I want you to explain to me
What type of Captcha are you going to ask for? and How do you know which device to order? if the only teams are the ones I already mentioned.
Now, I have the other and I’m going to send it to you in an image.
This profile is from the PC, which I have been using for a long time, since I installed Windows 8, this profile has been accumulating the amount of BAT for several months and that is why it has reached today
to that amount and that what is accumulated will also be added, my question is why it was not downloaded in Uphold and it did not allow me to do it and this profile was previously verified and now I get that I must verify it
and when I try to do it I get what is in the images that I indicate below. 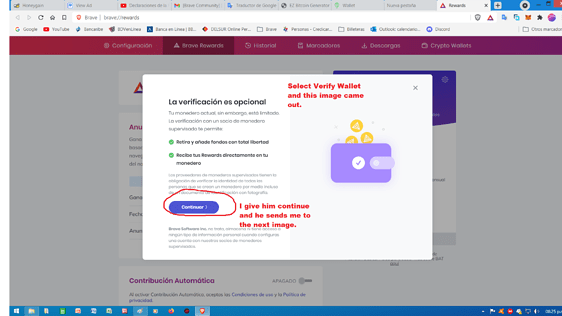 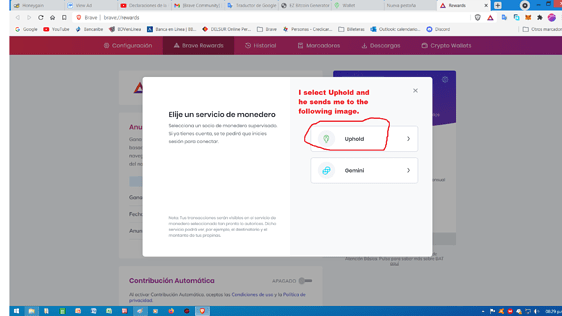 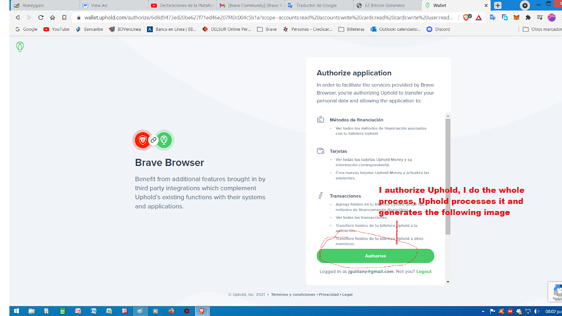 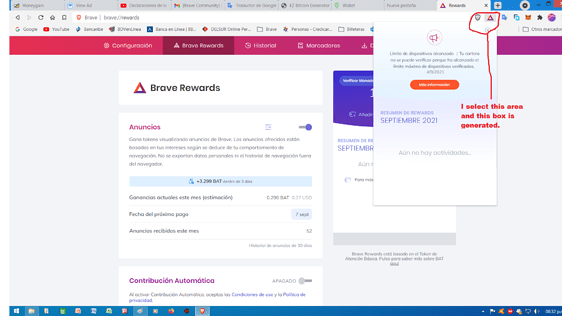 I hope that with this you understand and can provide a solution.

Here I send you an image of the cell phone where it indicates what I currently have. 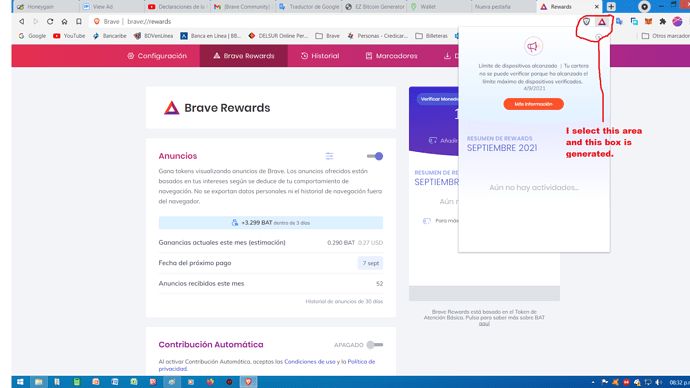 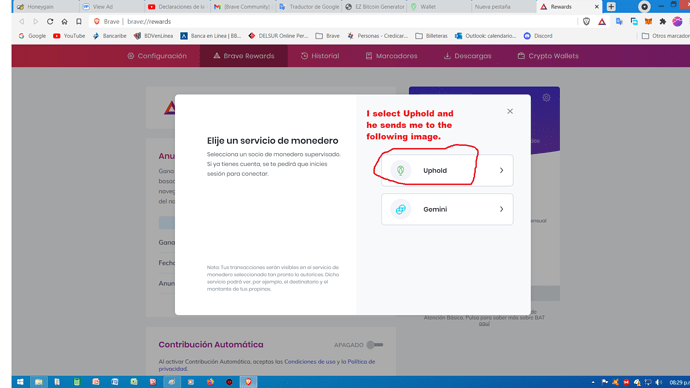 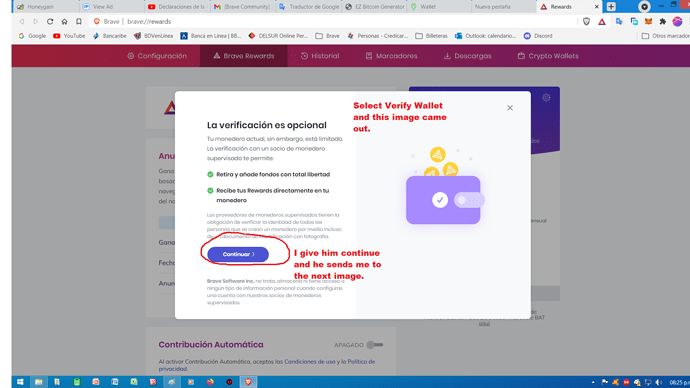 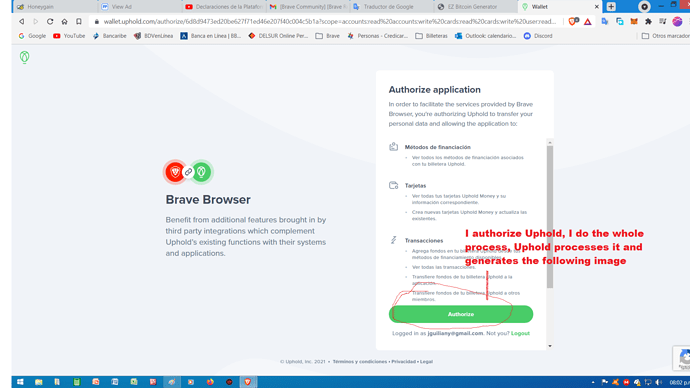 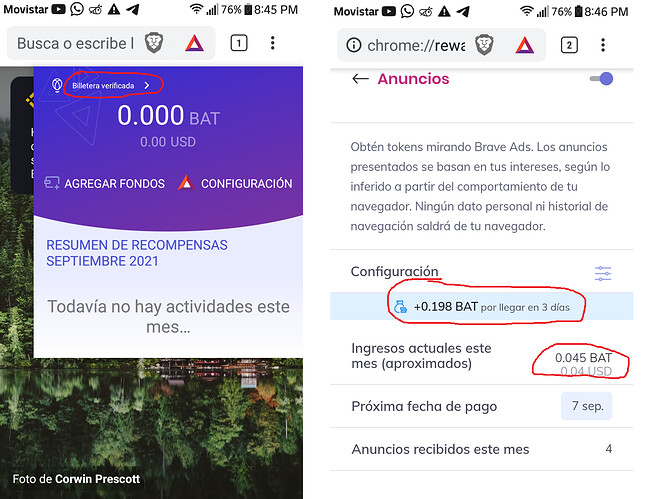 From the look of both the screenshots, I am thinking that both the devices aren’t verified and might have exceeded the limit.

Since none of the devices have sent any BAT to your Uphold Account.

And since Gemini isn’t available in your area, the only option left is to create a new Uphold account with some other’s documents (mother/father, etc.) with their consent.

Regarding which devices are connected, lets says I have a PC called “PC1”.

Due to some error, lets say I had to reset the whole pc. Now after resetting the PC lets say I name it “PC2” and I connect Uphold in that PC.
But, now the Uphold account will count this as my second device since I already once had Brave on my PC1, and so now there are 2 devices connected to my account even though I am only using one device.

Lets say my devices crashed multiple times and now its called “PC5”, now when I try to connect to Uphold, it will say that I have exceeded the limit, since its still counting the old versions “PC1, PC2, PC3, PC4” and so I won’t be able to connect to my PC5.

In mobiles too, after PC4, you can’t connect it. It will still show as “Wallet Verified” but it won’t be actually verified.

Currently, there is no way to remove old devices, i.e., (PC1, PC2…) so you can’t connect any new devices after PC4.

But they are working on removing the old devices, but not sure when it will be implemented.

OK Rajat, thanks for what you have explained to me, I really did not know this part and I am noticing it is now, I have been using Brave since 2019, but at that time I had not paid attention to the accumulation
of BAT and what benefit could it generate in this regard until last year almost at the end I became interested in the world of cryptocurrencies and that is when it interested me with regard to the browser and when I began to load BAT to Uphold it was very small values , but I had already lost a large amount, either because of the operating system changes that I have made to my PC and the Laptop without knowing that there was a device limit, when I saw that I could not load more BAT to Uphold, I consulted Support Uphold explaining what happened, so they recommended that I consult you, which was quite difficult for me since the whole process to send you the messages was fatal for me because everything is in English and I do not speak English, everything I do with Google Translate until finally I could have this contact.
Thank you again and I will try to take your recommendation to create a new Uphold account, until Brave works out how to remove excess devices that users have.
Besides, I wanted to take advantage of giving an opinion or a recommendation to you regarding the way to eliminate excess devices, if you accept it of course.
My opinion is that Brave places an option in the updates that they are generally constantly doing so that the user himself removes it, that is, when the user opens the option, the list of devices is displayed and the user selects and removes it himself. I hope this opinion or recommendation helps.

Rajat something that I forgot to ask you, creating a new account in Uphold, would that take 4 more devices as new or does it take into account the current one? Laptop, would that take it as new?

Many people have been asking for a way to remove the old devices and the employees are working on it.

And just to be clear, I actually don’t work for Brave or have any connection with them. I am just a common guy trying to help out people!

4 more devices as new or does it take into account the current one?

By creating a new account, you would first have to logout from the current account and then log back in using the new account. Hence you will get 4 extra devices, and 3 of them will get occupied if you connect all your PC, Laptop and Mobile.

Hope that clears everything thing up

You could enable Gemini from Venezuela using a VPN and a USA cell phone number. Maybe a friend or familiar living there can help you with that.

Oh brother that is quite difficult, apart I wanted to tell you to take Rajat’s recommendation to create a new account of a relative in this case I decided with my wife’s data but it was fatal since the people of Uphold denied it, Of course they thanked for the creation of the account but they did not approve it, I asked why and they told me that they have some clauses where they refer to scam issues, I did not understand why they mentioned that, so they sent me a Link so that it I read and they really have that regulation, I kept insisting on why and the answer was that they got an anomaly, I started to find out on my own and I got the error that I made but after I read another message that Rajat sent me after the recommendation where he told me that I had to close my account before creating the new account and just as done I had my account open and I think that there they did not agree to approve the account. Therefore it looks bad with this novelty.