What is the logic in a non-tracking browser forcing use of Google Play Services?

I don’t remember when I verified. It works fine while I’m being forced to allow Google to track every keystroke and my location at every instant of my life.

I do use VPNs. And TOR

My device does NOT pass SafetyNet Test because I don’t have Google Play Services installed on my phone. Not because my phone isn’t secure or isn’t safe but because GPS is not installed.

My Comment:
This is nuts! There is ZERO reason to install Brave on your phone if you haven’t degoogled your phone. The GBoard is recording everything you type. Play Services is storing your location at every second of the day and what you’re doing at that second and uploading it to Google who sells it to anyone that wants it and turns it over to government agencies if you don’t subscribe to Google’s politics. But the privacy/no tracking Brave Browser REQUIRES this if you want to participate in Rewards. Rewards is an ad platform so I can only assume, Brave is using Google Play Services to do the same invasive practices in their advertising model. Unless the Brave team has a really good explanation (and don’t believe the “we’re ensuring safety” bunk. GrapheneOS is far safer than vendor installed systems). Is it possible they needed Play Services to shortcut some coding and are working on removing that dependency? Nuts!

I think they use play services as an anti-bot deterrent. I read it somewhere.
Or they might use proxied play services for those brave ad push notifications.

But, there is also this thing where the new chromium feature of QR code does not work on de-googles android. It works perfectly on brave desktop. Brave should do something about it. 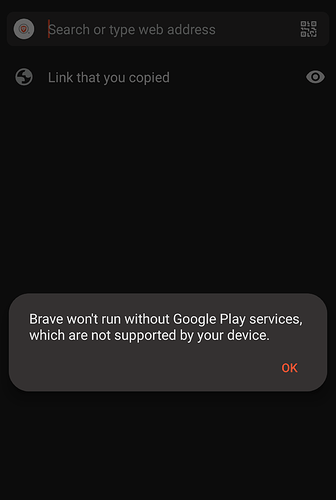 Yeah I tried to run the SafetyNet Test on a user profile with play services installed and sandboxed without any privileges and it still fails. Wasn’t willing to give Google network access so not sure but It’s likely just checking for a custom ROM period. I guess I’m going to just dump brave browser (maybe just dump brave rewards) on my phone until something gets fixed. I would just set up my own content site then auto tip my whole balance but that’s specifically against brave’s policies.

I was up for giving them a chance since they are going up against Google Ads with an interesting alternative but was on the fence to begin with since I get an identifiable advertiser ID from Brave now instead of Google. Sure they SAY they use it to track us but I have ZERO trust for any of these entities anymore.