Got it, thanks! I actually came across another tab that had that same info. Should have searched more I suppose.

This is why I said it is a mistake to enable this early WIP of vertical tabs to normal users, it is better if Brave just forced people who wants to use Veritcal Tabs where they belong, to the Nightly build, not even dev or beta (changes are pushed to late there).

That crash was fixed sometime ago, few weeks ago https://github.com/brave/brave-core/pull/16502 many issues have already been fixed in Nightly, they are working in polishing the tabs, because they are fairly stable.

They even changed the way pinned tabs work, to differentiate them from normal tabs, they also made it so you can switch from collapsed and expanded on hover, and it works fine because there was a time where it would not work too much.
They also got read of the bookmarks bar flickering on NTP, and other issues.

You won’t have these changes until who knows when and nothing you can do, so again, a mistake by Brave team.
Being the crash fix too recent, I wonder when you will even get that, maybe sooner but seems like a bad experience to push to stable.

Those features that you’re describing, are those on the nightly build or on beta/dev?

Nightly. Beta and Dev seem useless to me, because changes aren’t pushed to them quickly.
Nightly is stable and I can easily follow to changes by seeing PRs or commits etc. Then it is a matter of waiting for things to get ‘merged’ instead of waiting weeks or months, because some features will get pushed quickly and others will take months.
And I don’t even need to update Nightly everyday if the update is not good (updates are only downloaded by the updater, once a day on weekdays), so I can select if an update is worth it or not by seeing the Brave-Core commits or download the exe/apk because I know exactly if X or Y feature is available in specific builds.

Right now the polishing of the Vertical Tabs is pretty much the only PR going on https://github.com/brave/brave-core/pull/16501 seems like it is going well and it should be merged soon, in couple weeks.

PS: Polish vertical tabs design (#16501) is already available in Nightly since 1.49.46 (build wasn’t published for Desktop… so it was available to use after 1.49.47)
So seems like final version should be available soon(ish) and these fixes and pretty good changes to the Vertical tabs will be available on Stable in some weeks(?) even if it still needs to be enabled through a flag, but these type of changes can be tracked in issues like this https://github.com/brave/brave-browser/issues/24717 what still needs to be done to be a ‘final’ feature, since based on this https://github.com/brave/brave-browser/issues/23467 polishing is the UI is the only missing task there.

I’m trying the nightly now and it’s pretty cool - I love what they did with the pinned tabs in the vertical view. That being said, it also still crashes when pulling a tab when in vertical view. I’ll make a mental note to not do that without perhaps first switching to the standard view. I’ve also noticed when it crashes and you relaunch, the pinned tabs aren’t in view unless you toggle vertical tabs off then on again.

All in all, still works well. Better than switching to Vivaldi (unless they’ve made significant speed improvements).

Thanks Emi for your insight regarding this!

I stay to “tab search” instead.

This feature is currently being implemented (work-in-progress) and it already works really great in the latest official build (Brave version 1.47.186 Chromium version 109.0.5414.119).

You need to enable it via the flags (brave://flags/#brave-vertical-tabs) since it is still in Beta and then right-click on a tab to finally enable it in the UI after restarting the browser.

Vertical tabs just got a major visual update in Nightly and I’m really liking the progress! The only thing I would say is that the New Tab button at the bottom would not be my first choice.

My Brave Nightly just updated and now the vertical tabs aren’t visible at all. It’s the weirdest thing. If I disable it then it’s fine. There’s a sliver of a line on the side that shows the actual tab. This is version 1.49.69. 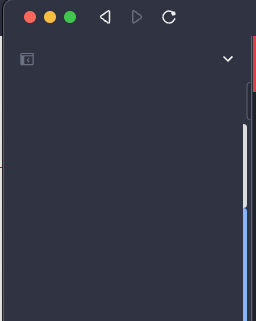