The value of BAT and tracking transactions

Brave users started “losing” BAT at an integral price increase. You can’t mine it but the supply is supposed to be limited. Check your BAT address for any transactions.

The Contract Address 0x0d8775f648430679a709e98d2b0cb6250d2887ef page allows users to view the source code, transactions, balances, and analytics for the contract address. Users can also interact and make transactions to the contract directly on...

BAT (BAT) Token Tracker on Etherscan shows the price of the Token $1.13, total supply 1,500,000,000, number of holders 419,605 and updated information of the token. The token tracker page also shows the analytics and historical data. 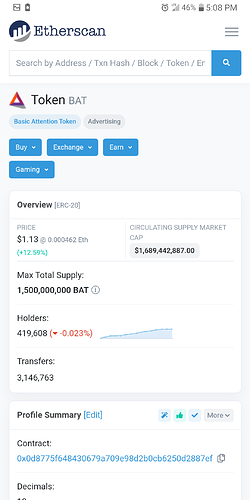 The supply is limited to 1.5b

How many people hold their BAT? If most are holding that could explain the drop in rewards? Can’t find advertisers if the tokens aren’t circulating.

Advertisers pay in usd, Brave uses that usd to buy bat of the same value to distribute to us, so the supply of bat is irrelevant in this manner, you will get the same usd value advertisers are willing to pay regardless of bats supply and price

Brave created the token, they mint it. Brave’s staff and CEO get paid USD. Advertiser’s pay Brave to push AD’s out. Also with a constant fluctuating value I don’t think any advertisers would commit any USD until the end of an AD campaign, when the analytics come in. That’s why you mainly see AD’s that are crypto exchanges etc.

BAT like many other tokens have no inherit value unless it’s being traded, bought or sold on crypto markets.

Supply matters if demand is met.

Doesn’t matter when a decimal point exist, look at btc

Also the reason for the estimated reward is likely the outcome of the AD campaign.

I know, that’s what I just said.

Well unless someone conveniences everyone to sell them all their bats, we don’t have an issue here 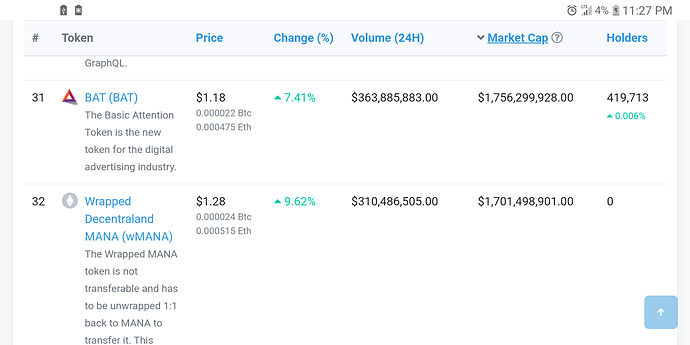 Why and when did people start reporting “Stolen/missing” BAT?

I do enjoy the forward conversation. Truly

This is a result of Braves default setting of auto contribute option and users linking more than one device to uphold while forgetting to immediately disable the option on all devices after installation, I think this is what you’re referring to maybe

I lost a-lot. I was an early adopter and participated in the machine learning study.

You lost them due to the auto contribute ?

No. I contributed to what I enjoyed.