I set up Brave today across my laptop, android and desktop. Everything seems to work fine, except for the browsing history. Not every adress I visited from the laptop appears on the other two, and vice versa. And the new adresses I visit after the sync don’t appear at all on the other devices. Is there a solution to this problem?

I just posted about this exact problem. Did they even check this basic feature before moving to sync v2?!

I think it’s a limitation that Brave inherited from Chrome. This problem is present in Vivaldi as well (not sure about Opera or Chromium Edge).

When syncing is done with a PassPhrase instead of a Google Account, you only get to sync histories which have been typed explicitly into the URL Address bar.

Any histories that are due to redirects or clicked links, won’t appear.

Personally, I think syncing of all History is a necessity. Everyone’s using multiple devices in this day and age, and it is imperative that I can rediscover any sites I found while using my tablet on the sofa, my phone during lunch, and my desktop in office.

Get your bookmarks, passwords & more on all your devices - Computer -... 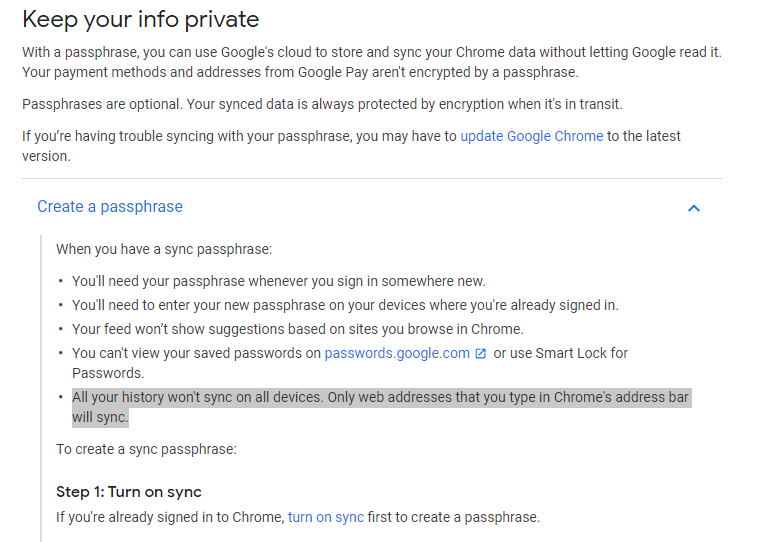 Brave also makes mention of this in their FAQ.

How does Brave Sync v2 differ from Sync v1? Sync v1 was a completely custom sync system, built as part of the old “Muon” browser.  Sync v1 stored all data into an encrypted log on S3.  New browser...

Any histories that are due to redirects or clicked links, won’t appear.

Oh, no. That is terrible news. I’d come back to Brave, having heard Sync had been rewritten.

So Brave will sync a typed URL bar search query like “antelope migration patterns at DuckDuckGo”, but not any of the pages I opened or the links I clicked.

They did specifically write:

When History is synced, you are essentially syncing typed URLs entered after both devices are added to the same Sync chain.

That’s a no from me, dawg. A genuine shame: I’ll return in 2021 or 2022 to see if anything’s changed. Sorry to see history sync turning into a years-long project.

You’re right about the issue in Brave, and it’s exactly the same in Opera. Chrome, on the other hand, syncs all pages, and I think syncs more quickly than Brave or Opera.

I came back to Brave recently as well after learning Sync has been updated and improved.
When looking through my synced history, I too was not seeing any of the pages I was visiting on the other device.
The FAQ made mention of ‘syncing typed URLs entered’, but I didn’t think it literally meant you had to type out manually the full address for it to sync between devices.
I’d like to see this forum on my mobile device as well, but I can’t be typing ‘Sync v2 doesn't sync new history across devices - #5 by ikjadoon’ into the address bar so as to be sure it syncs.
I agree with @boppinparty on this one. Back to Chrome I go.
Cool browser you have here Brave, but the sync is not practical for me. I rely on a synced history since I move between a laptop and Pixel mobile phone all day.

This thread answers a question for me. This morning, during my morning news read w/coffee, I opened an interesting item on my phone, but the screen being small, made it difficult to view image details. (It was an article full of charts. Sue me, I’m a nerd.

) I went over to my laptop hoping to retrieve it from my other device history. It wasn’t present. When I clicked the “more…” link, the page opened up said it had been 13 hours since my phone’s history had synced. Eventually, after much messing around (deleting tabs on my phone, refreshing pages), the history time updated, though that article still didn’t appear. Eventually, I believe it did.

Now, a few minutes ago, I found myself repeating this same futile exercise. I’m reading an article which is better viewed on a larger screen. I had that article and one other open tab in Brave on my Pixel. The History/other devices menu on my laptop only showed the other tab, not the one I wanted to view on my laptop. I figured, “Surely, if I delete this other tab, Brave will immediately sync and I’ll be able to read this article over there.” I deleted that other tab. Brave synced very quickly (within a minute or two), but History on my laptop reported, “no tabs from other devices.” I think you’re wrong, Brave-o. I’m looking right at a tab on another device!

I find the “type a URL” constraint more of an excuse than a valid reason not to display an other device tab. How often do people really type a URL into their browsers these days? Oh well. I won’t be deserting Brave as sharing tabs wasn’t the primary reason I switched to it. Still, it does seem broken in this regard.

I come here for exact same concern and this is a huge stopper for me switching to Brave.

It’s still not working. I can’t see the pages I visited on my laptop from my phone and vice versa (I have sync-everything enabled on both devices). This is really disappointing – moving back to firefox

I figured out how to get sync of history working:
after you join sync chain, go to Settings/Sync/Data preferences on Android and make sure what you want sync’d is turned on (or select all). Make sure every device has the data you want set to sync. (can’t imagine why history would be off by default)

@eturk, Yes, that is how history can be synced. The issue is that, as many were pointing out, it only syncs explictly typed addresses, which are generally a very small percentage of one’s history, and probably those one can remember by heart (easier to remember website.org than website.org/weird_page/with_a_weird_address_12345).

As many pointed out, only explicitly typed addresses are synced.
It is extremely frustrating. Does anybody know if it’s possible to pressure the devs to work on this??

A partial solution, for items that one still has open, is to sync open tabs. It solves the “I want to read this article from my tablet/laptop rather than my phone” issue. But only for stuff you still have open!! =(

You are responding to a 6 months old thread.
And TypedURLs are a Chromium feature, that’s why when you go to Sync-Internals it specifically says “TypedURLs” and not history, that’s how Google designed it, so I don’t understand what it is so frustrating since every Chromium browser doesn’t really sync the history (I don’t know or care if Firefox does it).

Google is trying to improve it anyway, there is a flag in Nightly (who knows if it is on stable), that reads: Enables the History sync data type instead of TypedURLs brave://flags/#enable-sync-history-datatype so all you can hope is Brave team to make it work with Brave sync when it works in Chromium.

You are responding to a 6 months old thread.

I was not aware of that. Brave’s settings say “history”, though. Which is misleading, as shown by the amount of people puzzled (and annoyed) by the behaviour.

I am not claiming that other Chromium browsers do it. I just wished the feature was there. I do not think that disregarding user experience is a good attitude.

Google is trying to improve it anyway, […] all you can hope is Brave team to make it work with Brave sync when it works in Chromium.

Thank you. This is the information I was looking for. The attitude was not necessary.
Have a nice day.

I don’t have, or need to have a good or bad attitude, you are the one projecting your here, I mentioned you were necroposting this, which is true, a post that should have been closed long time ago because it is not healthy for a forum to keep old threads alive.

And my point was how Google always used that term, ‘history’ and everyone else went with it because it was the easiest thing to do, you are right, it was really dumb they called it like it, when sync-internals shows how it not even close to history, but sessions and typedURLs and whatever other elements it enables.
But the problem is asking Brave for this is not going to happen, because you have to think about the cost vs demand might apply here, it is kind of a niche feature, so it would be easier to ask Chromium directly to implement it and help everyone else, because Brave as a fork can’t just complicate things too much so nothing breaks too much when new Chromium updates are released, and if Brave wants to keep themselves in sync with Chromium the closest they can, just think how Brave couldn’t add Extensions support to android because of the cost and the team size, and extensions is more wanted than true history synchronization which is just what few users want.

The good thing is now you can build a proper case for a feature-request post or a github issue to see if Brave is even aware of the new flag that was added just 3 months ago, it removes TypedURLs and switches it for History, so it might be what can be used to do what you want now? but I wonder if Brave team is even aware of it.
That’s why necroposting is that is not good thing, it was just more cycle of complains about something that couldn’t be change 2 years ago but maybe now it can be changed, and you can make Brave team more aware of information in a new post than ones from 2 years ago.
So like I said, now you can take the information I gave, make a post or an github issue and see what Brave says and hope they can see your post, if you have twitter, I would even ask Brendan Eich directly, sometimes we seems to be more aware to read these things than a github issue or community post though.