Hello.
Brave on Linux is running something in the background. It’s hogging one of my CPUs to %100 and memory.
It has been going for 30 mins straight now and this is very suspicious for me since I did not start anything.
The attached contain screenshots. 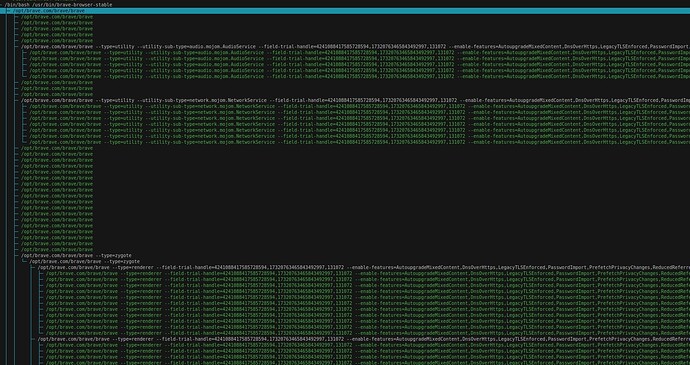 They don’t seem suspicious processes, because (in your first screenshot) the executable is always “brave”. I agree they shouldn’t keep the CPU always busy, though. Let’s hope a Brave staff member chimes in.

It comes back when I open the browser again. After a restart it hasn’t started that process again.
I’m not sure if it’s mining some crypto currency or what…

I’m not a Linux user, but the 100% cpu usage is unusual. I would backup the old Brave profile, an start new then see if it improves in performance. Also enabling GPU acceleration will offload some cpu usage.

There may be many different reasons.
Also, you should check your extensions.
By the way, it would definitely be counterproductive for Brave to mine cryptocurrencies, because the source code is publicly available and if someone discovered that kind of undesirable code they will surely pour it out everywhere right away.

it is unlikely but definitely possible.
In software (especially with Git), it is very each to maintain two branches of source code. One that you put publicly online and one that you compile binaries out of that other people download and use.

Unless you compile the source code yourself, you can’t know for sure what is underneath it.

I’m not saying devs of Brave doing this or whatever. I’m just saying that it is POSSIBLE that people can tamper with it. Quite easily so. But it is unlikely yes.

Anyway my question is what is brave doing on the background with regards to this specific issue. And is there a service / task that I need to disable to prevent this process from running?

Unless you compile the source code yourself, you can’t know for sure what is underneath it.

In theory it’s true but in practice we’re not talking about a server, whose real source code would be impossible to check if an instance is running remotely. Since this is not a server but a client, it’s not unreasonable to use one’s own executable, assuming one knows how to compile it, and draw one’s own conclusions.

That being said, I can’t help you out with Linux, I’m sorry.

As for the other processes shown, these are all expected processes that are initiated by built-in Brave feature and/or extensions – they appear for me as well:

Thanks for your reply @Mattches

I wasn’t clear perhaps; turning off hardware acceleration solves this sort of a thing on chromium-based browsers but that wasn’t the issue.

I’ve just let it run for a few hours, whatever it did in the background finished and my computer stopped gasping for air.

My question is what does Brave do in the background and would it run again just randomly without asking the user? This was a fresh install as well, no addons etc. Updated to the latest version. If you could help me figure out what it is that would be great. Otherwise, I think the hardware acceleration you’ve pointed out would perhaps make the process run slower without hogging the resources. But why would we have to run this in the first place? That’s the question.

Otherwise, I think the hardware acceleration you’ve pointed out would perhaps make the process run slower without hogging the resources.

HWA essentially offloads processes that would typically be handled by the CPU to the GPU for faster calculations. However, we have some known issues with HWA where the browser can essentially be picked up by the OS as a “game” and HWA kicks in (when it shouldn’t be) and causes the uptick in resource usage. That is what was happening in the background.