Uphold too is gone from India after Gemini. I think it’s because India’s announcement of taxing “virtual digital assets” and some of it’s provision will be coming in effect from July 1.

idk why… no payouts for april and may,so bad

Correct! Gemini has no restrictions in my country, my account is normal, despite Brave indicates a different situation. So, the problem is at the Brave side, not Gemini’s.

Sorry, but I don’t think this information is a “solution”. I think we are pending.

No, it’s been answered which is the solution. Also I’d advise you to try to read everything that has been shared here on Brave Community. Such as everything I link in Region Not Supported India - #3 by Saoiray

If you’re expecting them to just reopen right away, it’s not going to happen. There’s a lot of stuff going on. You may not be happy about it, but not much can be said about that except for you to say you’re unhappy. That’s all…

Not to mention, some things are beyond Brave’s control. Such as: PSA: Venezuela no longer supported by Uphold (or Gemini)

where is rewards why we can’t login in Gemini ??? this is nightmare support, we must put this on Reddit so then will Brave start payout and etc. Croatia no on list ??? how after one year of using, now my region is ban ??? We will go with this on Reddit <3

I am facing same issue with Gemini. contacted Gemini they said there is no issue from their side. Brave is supposed to solve this issue. Looks like this is an internal issue.

Thank you for your attention, @Saoiray, but I think I was not clear enough. The question is that Gemini says there is no problem at their side. In fact, my account on Gemini is perfectly OK. My country is Brazil and we have no problems around here. What we ask from you at Brave is a little more transparency. As I said, you say Brave AND Gemini are working on this issue, but Gemini says there is no problem at their side. What is really going on? I mean, what are the real reasons we’ve lost our connection? That’s why I don’t consider it as a “solution” and I hope you understand my point of view. Thank you.

Probably an example that answers ‘The Why of it’ - what @Aman_M says:

Uphold too is gone from India after Gemini. I think it’s because India’s announcement of taxing “virtual digital assets” and some of it’s provision will be coming in effect from July 1. I am sad.

Brave Rewards probably does not want to get involved in the administration of tax reporting.

Per individual who has enabled Brave Rewards.

Per region of residence, of that individual.

And more, what @Aman_M reports: 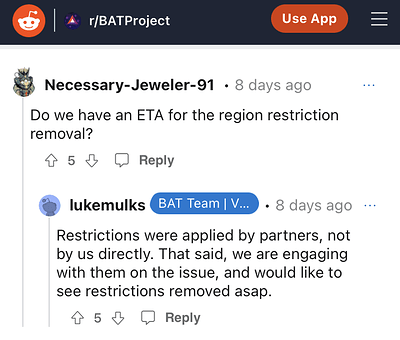 It looks like a decesion of custodial partners’ and not Brave’s.

2 Likes
Unfortunately, your Brave Rewards cannot be verified because your region is not currently supported for Brave Rewards verification
My gemini session was closed and it no longer allows me to log in
Gemini Disconnected from Brave
Saoiray June 27, 2022, 10:21pm #62

The question is that Gemini says there is no problem at their side.

Unfortunately customer service at Gemini is not that good. The average person working for them does not understand the things going on. I’ve contacted them before about issues for them to say it was Brave’s issue. Yet when I insisted and asked them to escalate it to someone higher, the supervisors then acknowledged it was their own issue.

That said, the reason is that Gemini generally just focuses on generic info. So if they are offering services to a region themselves, they’ll say they noticed no changes and to check with Brave. Yet if it’s because paperwork between them and Brave and they put a pause only on Brave, not all of their customer support people are aware.

Brave has shared things. It looks like I didn’t directly link it here, but you might want to check out Psa: updates from brave call

In that is a link to a YouTube where a Community Call was held. At 42 minutes, I started talking to Luke Mulks and others where they talked about this topic. I’ll quote below their answers. It was primarily about India but they were saying it in regards to all regional changes.

We’ve moved fast in trying to get BAT to everyone and make ourselves available in as many regions as possible. Unfortunately each government has different restrictions and we’ve encountered some pushback from that in different countries. For example, each country has different requirements for KYC/AML among other things that weren’t being met by current standards, so those regions had to be put on hold while this gets resolved.

We really want India and other countries to be able to be Verified and are working behind the scenes to do everything we need. We hope to get this resolved ASAP but there’s no timeline.

What this means is there are obligations needed by various countries. Brave was not able to comply with everything as needed. Therefore, while they get things together, there was a hold placed between Brave and Gemini. Neither company is wanting to give details or say which screwed up, though it’s looking more like Brave. Yet even if Brave messed up, it would be Gemini who stepped in and said changes needed to be made if they wanted to stay in business together.

However, not everything is all about Brave for some countries. Like Russia, Ukraine, and Venezuela not being able to connect is due to government regulations and sanctions. It’s absolutely nothing to do with Brave.

India, Vietnam, India, and a couple others are because of fraudulent activity overall. There were some issues regarding legal compliance and all as well, but there’s a lot of stolen accounts and things going on as well. For example, a User posted here to show some of the things they were finding of people selling accounts (which means selling other people’s identities) so people could retrieve BAT. Some Fraudsters Buying and selling Gemini and Uphold accounts for BAT token withdrawal

Because there are so many little things impacting each region, it’s hard to give a full answer. So what generally is being passed on is that each thing is temporary and asking people to be patient.

ALSO
There are changes coming up that I can’t wait to figure out. For example:

The process in having a business relationship with exchanges is more difficult than Users may realize. There are a lot of fees and other arrangements that need to be set up to happen.
That said, we are in talks with multiple and hoping to reach new deals to expand offerings. In fact, we can’t give details, but we have a major deal we’re hoping to reach soon that would make Users very happy. We are also always reaching out and trying to do business with other companies, but it takes time.

And whether related or not, there’s a recent response to me in regards to Backup & Restore for Rewards, so that Unverified users won’t risk losing their BAT if something happens to their device. Of course, when I say Unverified, it also means Users who can no longer connect to Gemini or Uphold. Their information on that is:

As you can see in the PR brave/brave-core#13757, a tremendous amount of work went into this, and the feature has been going through the code review process. However, some big changes will be coming to Brave Rewards in the near future that may make Backup & Restore less relevant. As a result, we decided in a meeting last week (after considerable deliberation) that Backup & Restore be put on pause.

In the meantime, users facing a situation in which they have no custodial option and need to back up their current vBAT can manually copy-paste/back up their /brave-browser folder (at least on desktop), which will contain their vBAT at the time of manual backup. They can find a path to it in brave://version.

They won’t reveal these big changes. Anyone here can make any assumptions, such as wondering if those changes might make a difference for current Unsupported Regions, but since they won’t reveal details, we don’t know and only have to wait.

2 Likes
My gemini session was closed and it no longer allows me to log in
Rewards account flagged, I'm old & confused and don't know what I did wrong
can i create bats backup?
Chocoholic June 27, 2022, 11:14pm #63

@Aman_M Hi and thanks for the link! What I really found interesting was this snip…

Brave will be the most popular browser, but paying, receiving, and tipping with BAT needs to be as simple and user-friendly as Patreon and Venmo.

Brave is awesome, but crypto needs to be made simple to use and understand for mainstream growth.

Reply BAT Team | VP of Business Operations
Agreed and understood. This is exactly our aim with Rewards, and with the Brave Wallet.

A large amount of effort and resources are being put into both fronts within the company right now.

Yup, and we’ll be integrating Brave Rewards, both user side and Creators side, a lot more closely with Brave Wallet. That’s the next big milestone!

Don’t want to get my hopes up too high, but those replies by the VP of Business Operations and Product Manager (Rewards) are very intriguing. Especially the “…integrating Brave Rewards…a lot more closely with Brave Wallet.” That makes my imagination run wild! lol

Edit: After coming down from anticipation high… and thinking of pitfalls… decided to just leave above. lol

With a little bit of editing - a note to all who will back up their data:

Users facing a situation in which they have no custodial option and need to back up their current vBAT can manually copy-paste/back up their Brave-Browser folder (at least on desktop), which will contain their vBAT at the time of manual backup.

Even i contacted Gemini and they said there is no issue from their end.

Thank you for your detailed answer, @Saoiray , very clear. Now I understand YOUR point of view and it is easier to accept the waiting. I’m not sure about how that kind of “backup” works in “real life”, but it’s a way out and I’ll check it asap.
Regards.

Same here, just got logged out and can’t re-link my account because supposedly my region is not supported (Romania). Worked fine until now.

So if we backup this folder Every month and in future if there is any kind of system failure or software related failures can we recover our balance ? will Brave consider it ?

“Thanks for all the good questions. In short, this is where backup & restore stands:”

And, re what @Saoiray reported from a recent Brave call:

In the meantime, users facing a situation in which they have no custodial option and need to back up their current vBAT can manually copy-paste/back up their /brave-browser folder (at least on desktop), which will contain their vBAT at the time of manual backup.