Receiving less Brave Rewards than actual stated on the way 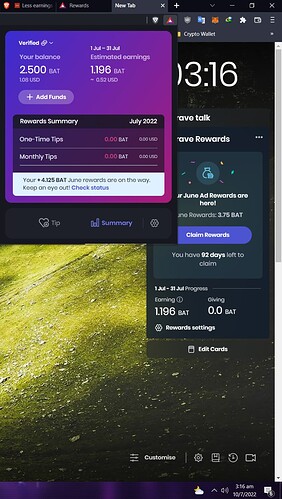 What Operating System and Brave version are you using (Menu --> About Brave)?
Windows 10 64-Bit. Brave Version 1.40.113 Chromium 103.0.5060.114
Is your browser wallet currently verified? (yes/no)
Yes
What date did you verify your wallet?
20/10/2021
Have you been able to successfully receive payments in the past?
Yes
Are you using a VPN? (yes/no)
No
Are you in a supported region (see here for list of supported regions)?
Yes
Does your device pass the SafteyNet check (Android only)?

Have you manually turned off Auto-contribute on all of your devices linked to Uphold??

Seems to be a common issue. I’m sure they are working on it. I was supposed to get 17.xx but ended up with 16.xx. They’ll sort it out for the next payout I am sure

Please also try to understand the meaning of estimated.

How can it be estimated when its already on the way? Then Brave devs might as well don’t need to put how much worth is on its way since its estimated? It’s like you’re saying you transferred 4 BAT to another wallet and its on its way but it is estimated. Meaning if i have less than 4 BAT then the ones missing are stolen? siphoned? went to another wallet?

@Murphmeister I would say Nefarious is right. The banner X BAT arriving in Y days is not estimated. Only current earnings is estimated as some of it get rolled-over.

Yeah, I thought the whole thing about rolled-over bat is that it wasn’t reconciled. Whereas the arriving bat was reconciled (i.e. already allocated for payout). 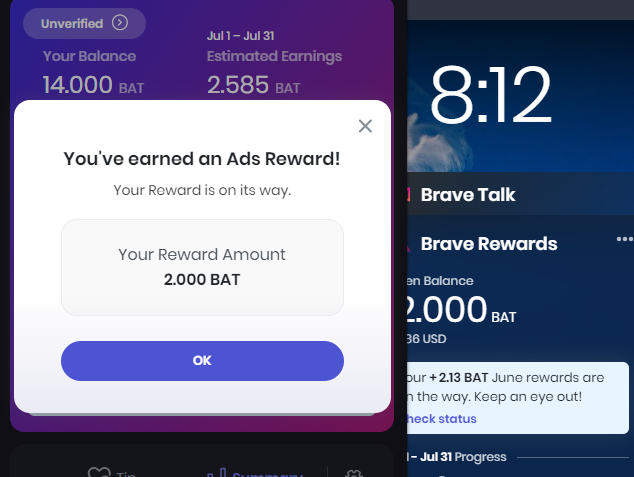 Same here… and yes I done everything what did you wrote… I should get over 1BAT, I’m getting 0.3…

Same here … I have not received the complete payout but then i read the brave rewards FAQs… There I read that unpaid payout would appear in the next month.
But as usual my brave rewards didn’t appear in next month also.

The following poll, may interest:

What is the difference between the Rewards"X BAT is arriving in Y days"(A) notice amount and the Received (R) payout amount. This is a multiple choice poll for users with multiple Rewards wallets. Max 7 entries. poll What is the total difference between all your Rewards"X BAT is arriving in Y days" (AT) notice amounts and the Received (RT) payout amounts? Select one poll How many Rewards wallets do you have? Select one (all Brave versions included) poll

Sorry, i don’t get your point.

Just as a hint:
if you’re down by 5cent at the end of the month, it would be easier to ask some random dude for 10 cents, that would take less than 5min of “work”, but it would double your “payment” in a fraction of time without wasting your time for 30days.

It seems that there’s been a confusion.

Expected to receive 4.26 for the month of June

After cut-off for June, Browser notified I was to receive 2.13

This proves that people are receiving less rewards to what they are supposed to receive and support the claim of the thread starter.