Questions about the last release version 1.15.72

does anyone see the

as i do not have this i even tried new profile and nothing show up there and it’s name does not show up in the settings
brave://settings/newTab

the release doe not say anything about this new section

could we get more details about that

Edit : forget to mention i am on linux centos 8.2

thanks and have a nice day

the release doe not say anything about this new section
… brave://settings/safetyCheck
could we get more details about that

This is not a feature specific to Brave, but rather is in the core of Chromium (and thus is found in Chrome, and possibly other Chromium-based browsers)

The check runs a scan of your Chromium / Chrome / Brave setup and reports on the status of various privacy or security options and makes suggestions [if lacking]. In some browsers, it will check on installed extensions … and it’ll check the version of the browser you’re currently running.

It also will check if stored passwords have been compromised. (similar to how “Have I Been Pwned” works, but it’s native to the browser.

For example, here’s the output upon running the check on Chromium on openSuse Tumbleweed Linux. 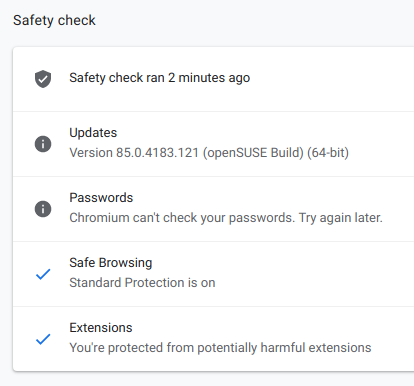 And this is Brave Dev channel on the same Tumbleweed 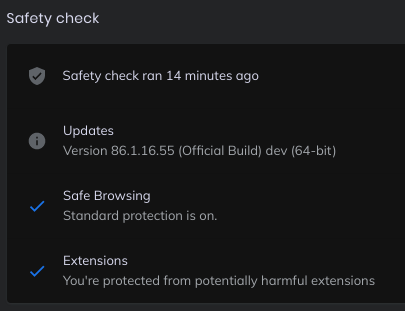 and have a nice day

I see Gemini, Binance, and Rewards only.

@justsomeone1,
The Bitcoin widget is only available for specific regions, as it states in the issue you linked to above:

i missed reading the github link

and have a nice day