Today’s Community Call helped answer a little more on the changes that were discussed over the weekend due to discovering the Help article at https://support.brave.com/hc/en-us/articles/10972518124941. You can listen to the call via the link at the bottom of this post.

Here are the key points:

EXPLANATION OF WHY DEAD ACCOUNTS MATTER:

There is a limited amount of BAT that was created and is circulating through the economy. Brave has to hold enough BAT to be able to pay every last bit of vBAT that has been earned. Since there’s been no backup & restore option for BAT beyond having it connected/verified with a custodial partner, this means anyone who would have had corrupt profiles, lost their device, reformatted their device, changed to new devices, etc would have “thrown out” the vBAT they earned.

Yet, there’s no real way for that to easily be accounted for on Brave’s end. They would have to pretend that you still have access to that vBAT and have enough BAT set aside to cover it if you ever were to have it withdrawn. With many legitimate and bot accounts having this happen, it can add up to be a significant amount of money that can’t be touched.

With that said, new change is meant to help reduce the amount of BAT being removed from circulation due to these “dead accounts.” If not handled, it would have pretty significant impacts on BAT earnings and the ecosystem in general. More than anything, Brave is wanting to make sure everything is accounted for and no issues. This is especially true as they’ve been watching the fallout from FTX and others. So action is being taken to make sure everything is accounted for and they are doing the best they can to watch out for us.

The first 13 minutes of the Community Call was about NFTs and all. The applicable part of the call to this topic starts after, so link provided starts 13 minutes in. https://youtu.be/-FdK8TI8KII?t=802

Since there’s been no backup & restore option for BAT beyond having it connected/verified with a custodial partner, this means anyone who would have had corrupt profiles, lost their device, reformatted their device, changed to new devices, etc would have “thrown out” the vBAT they earned.

Yet, there’s no real way for that to easily be accounted for on Brave’s end.

I don’t think the Brave devs remember the decision to remove the backup option was made by Brave devs.
They created an issue and they are blaming users now.

decision to remove the backup option was made by Brave devs.

Well, it definitely was throwing fuel on the fire. I do think regardless, we would have ended up with a lot of inactive accounts over time, but they definitely made it much worse by not having a way to backup & restore for BAT. What’s frustrating for me is to know they had it code complete this year and was about to implement it, then they changed their mind because sometime next year they want to make Rewards part of Wallet.

That’s still one of the more annoying and nonsensical things they have done.

I guess I’ve been getting myself into the mentality that ever since Covid-19 started, the world has been a shitshow. Brave has really been doing all of their dumb stuff here in 2022. I really do think things are going to be getting better in the second half of 2023. It’s just persisting through a lot of this crap until then.

I am testing and you don’t watch any ads if you are not verified, therefore, creators will be earning even less

Nice work @Saoiray for asking some of the poignant questions and summarising the answers.

Not sure I entirely buy into vBat being the real reason for this change in philosophy/ecosystem. But if it is, Brave certainly have contributed to the issue, as stated above. Lack of backup/restore, flagged accounts and forcing some users to reset their rewards if inputting the wrong country. Furthermore, wouldn’t it only be a real issue if all of these dead accounts suddenly resurrected and en masse tried to convert their vBat to real Bat?

That said, I’d like some clarity on a few other aspects of this.

Why hide the estimated earnings

Because you won’t be earning anymore. They only are hiding estimated earnings from unverified, if I understood them properly.

wouldn’t it only be a real issue if all of these dead accounts suddenly resurrected and en masse tried to convert their vBat to real Bat?

Nah. If you assume that they have to put all the BAT aside as if it’s being paid out and can’t touch it until “claimed” or whatever, then it would be like a funnel. Some may argue the amount is quite petty in the grand scheme of things, but I can’t tell you of a single person or business that likes to have unusable money. But they can’t go and be like FTX either, of telling you it’s there when it’s not.

Your situation would actually be the part that happened with FTX, where people did suddenly appear to withdraw and they DID NOT actually keep the money aside to make sure the reserve was there to make sure it was paid.

Will auto-contribute remain the same to what it is now?

Yeah, it will work the same for Verified users according to what they said.

Or will this too all be hidden/obscured a la the estimated rewards?

If talking about Unverified, then different story. For example, let me show you. 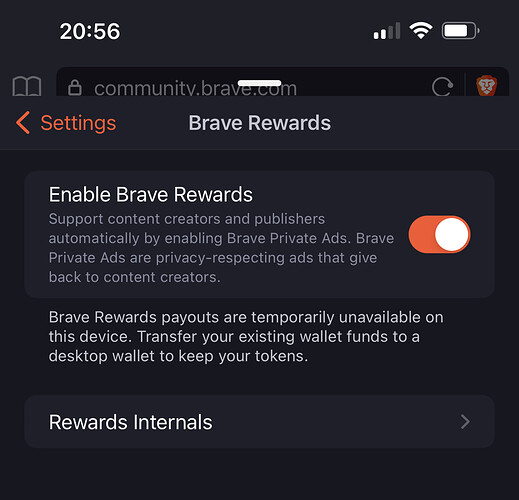 The screenshot above is what I see on my iPhone. It’s been that way for a long time. In that, I have no control over who gets anything. Ads still appear if I leave Rewards on, but I don’t see how much BAT is accumulated and honestly have no way of knowing if any Creator actually get anything. We just have to trust that Brave is sincerely sharing that BAT from us seeing ads.

But this is what Brave is saying it’s going to be like for all devices when this goes into effect. No earnings and essentially no display of BAT earned because you won’t be able to earn UNLESS you are connected to a custodial partner. Beyond that it’s all blind trust.

Is it a coincidence that the Release of 1.48 coincides with Payouts/Claims on the 7th of February?

Not really. Brave mostly follows Chrome release schedule, which is on a 28-day/4-week cycle (with some exceptions) in late 2021. This means a major versions every month, most of the time at the beginning of the month and sometimes at the end of the month.
Chrome used to have a 6-week release cycle, at that time Brave had a 3-week release cycle. When Google shortened it, Brave aligned with the new cycle.
You can follow Chrome release schedule here or here.

With the continued erosion of user trust, it makes sense the next logical step is to introduce a new system based entirely on blind trust

Is it a coincidence that the Release of 1.48 coincides with Payouts/Claims on the 7th of February? In short, do unverified users still get claims for January Ads?

Interesting. Something to note and look out for.

Ads still appear if I leave Rewards on, but I don’t see how much BAT is accumulated and honestly have no way of knowing if any Creator actually get anything. We just have to trust that Brave is sincerely sharing that BAT from us seeing ads.

Though it looks to me as a long shot but it’s about time for Brave to shares some statistics after these changes, how many unverified opt-in users? How much was the collective payout to cretors? Even if these numbers are small. Does Brave has reserved real BAT for all unverified vBAT given in payout, till date?

I think now, Brave needs to increase it’s communication even more especially with payouts. Fear of FUD can never be an excuse against transparency.

I have decided to opt out of Brave’s Ads in Nightly, which is unverified, until Brave decides to share some numbers.

I get it that we won’t earn more BAT in nightly unless verified.
What about the previous months BAT that hasn’t been processed as they don’t process a large chunk and just roll over to next month? Is that all gone?

First, Uphold leaves Venezuela, so now I can’t move my BATs from my account.
Later, well, I had to change my laptop, so I lost my few BATs. Whatever.
But now I won’t be able to gain more BATs.

Thanks for the info.

Brave is the best browsers in terms of privacy along with libreWolf, however I do not agree with this decision and will stop using Rewards until there is more transparency.
Why use cryptocurrencies if KYC becomes mandatory even in the absence of withdrawal just to contribute to the creators?
At this point, the blockchain and its ethos contained in the whitepaper and the 2017 ICO become just marketing and do not bring any improvement to a centralised token distribution system.

well people on unsupported regions are also dead accounts since they cannot connect to a custodial wallet. when do we expect this update effective in brave and brave beta?

you will be able to opt into Rewards but 100% of your share of BAT will be given to Creators.

Any clue how this is gonna work?
How is it distributed to Creators, based on the pages viewed or randomly to any Creator, even if a user never opened their pages?

But kyc can be done decentralised way like globleid.

link wallet to verify how when uphold accounts of newly added countries are locked immediately after KYC, Brave is taking advantage of people to increase the number of users, get advertising contracts . Let’s see what people from different countries reflect on Uphold’s reddit and twitter

You guys are donkeys Rewards Support

Nothing . There’s a drama going on