"Open in Brave" from Firefox

I have a problem with Open in Brave Browser.

I used the suggested method to move the Brave profile to a different location off of my my OS partition, using this command in The Brave Browser shortcut

The command works properly with the shortcut, but the “Open In Brave Browser” addon requires a “path to the executable”, which is fine using the path you see in the image, but doesn’t work with the modified path used to move the brave profile.

Is there anything I can do to make this work?

Path has a space in it, does it maybe need to be quoted?

I’m not clear which path you’re referring to?

When the path In the addon options image I posted is used, it works, but the profile it accesses will reside in the C:\Users\xx\AppData\Local folder.

The path to the Brave executable I posted relating to it’s shortcut, that allows relocating the profile, is just the way it appears in the shortcut target field. 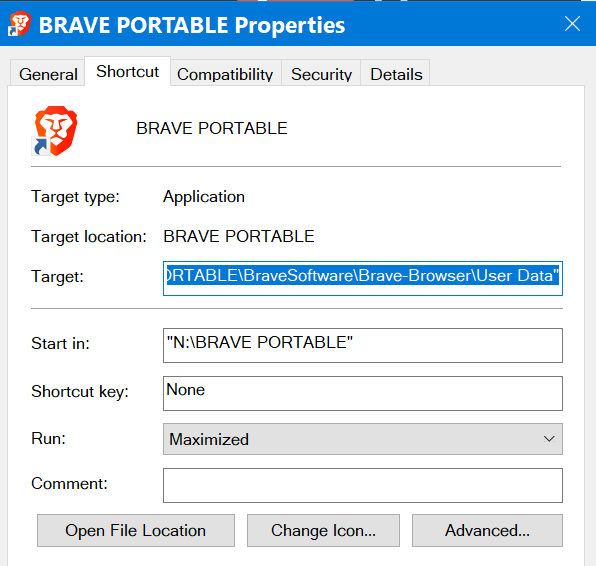 OK, I misunderstood then, I thought you meant it doesn’t start up/launch the brave.exe process.

So then when we’re saying “it works” or “doesn’t work,” what exactly are you seeing happen? Brave opens but with the default profile, or it doesn’t open, etc.?

From there, we can try to help but TBH you might be better off looking for a community or support for that extension, because a lot of this will boil down to exactly how that extension launches a process.

then see with a name BravePortable or whatever, then test if %BravePortable% works in that path.

if not, create a bat file and try it, what about pointing to the shortcut that has the --user-data-dir on it?