I’ve been using Brave for about a month and been receiving Brave ads to collect BAT. Everything was working just fine. However, just a few days ago, I suddenly stopped getting Brave ads altogether. I changed the number of ads per hour and toggled the ad and Brave rewards switches if they did anything. However, nothing has changed. So I’ve gone 2 days without receiving a single Brave ad.

I live in the US and use Brave on Linux Mint. It’s frustrating that it was working perfectly until recently.

@RedWare maybe this one can answer your question FAQ: Why am I not seeing Brave Ads?

Not sure if i’m opted into beta or anything. There was a period of time a few months ago where rewards was working for me. Though it only worked on sites where I had the brave shield down (Sites I trust and want to support). So just like in the FAQ posted above, taking down the shield on certain sites allows ads to be shown. Currently I don’t get rewards anymore and my toggle only shows ‘Coming soon’.

I’m in Australia. I just assumed it had something to do with our ISPs censoring websites, since those were the main sites I received rewards on.

Same with me. I run Brave on Windows 8.1, in the UK. I’ve tried toggling ads, but also to no avail. 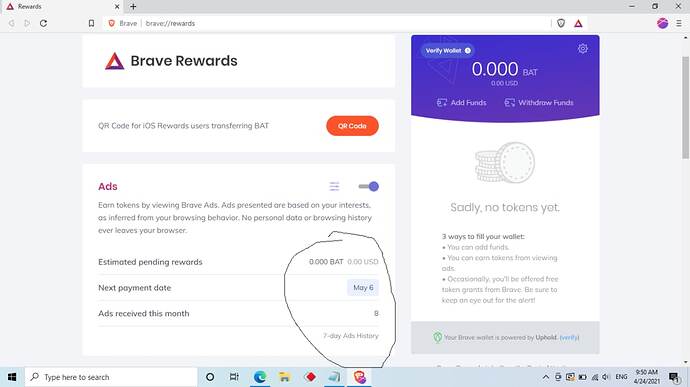