It still is in stable release albeit, till next update. 4/hour & 20/day for NTP Ads. May be a lot of users were reaching there so Brave had to go against it. But still 1/day looks too restrictive.

I wonder what time the “day” restarts?

I think that is for push notifications

I meant this (see view limits)-

lol haven’t a clue what that means. Guess I’m going to actually have to go read the topics explaining the catalog viewer… I know a topic where I can go look to put my fingers on those.

Cool. Thanks for info!

so forget reward earning. when this update get pushed in stable version.

better to rethink before pushing out to stable version.

Well, from my experiences it’s as I said. Also know a while back it was explained by someone at Brave. But I don’t have that resource to link back to. I guess it’s something I’ll need to verify with @tmancey, @Mattches, or someone else from Brave later.

I do know right now ads are almost nonexistent. 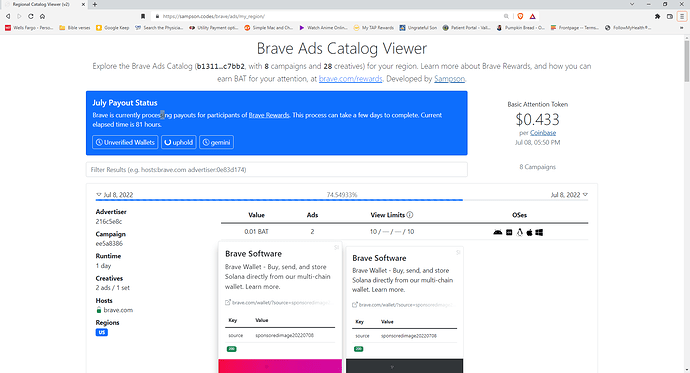 And when I checked verbose log for my Brave Rewards,

All ad_notification advertisers have been shown, so round robin

So yeah…I’m stuck in a “no ads” situation.

Ad campaigns vary by country, and by the operating system. In some countries, there may be fewer ads observed throughout the month based on campaign size, delivery pacing, operating systems, content categories, and that advertisers have selected to run their ads to.

As we continue to generate additional demand for countries where Brave Ads are available, the consistency should improve over time.

Ad campaigns vary by country, and by the operating system

Yeah. I’m sorry, I had tagged you in on something where I wasn’t fully clear what I was tagging about. We were talking about the Brave Ads catalog that Samson shows, which is https://sampson.codes/brave/ads/my_region/

The question is whether the View Limit they show is per campaign or per ad? Of course this came about as we were discussing NTP, as they were discussing limits and where you (@tmancey) wrote to say NTP ads are now frequency capped. Brave nightly no ads - #2 by tmancey

Which not sure if frequency cap is same or different than the View Limit that had already existed?

Hi @Saoiray. I am not sure sorry. Thanks