I have used Brave as my default browser for a while, but switched to FireFox only for one reason… FF has a mute button on its PIP window. This feature is extremely useful to mute a video quickly without having to do so at the tab level.

Would it be possible to implement this in Brave. This is the only thing keeping me from switching over.

it is already there on Desktop, but you need to enable brave://flags/#global-media-controls-modern-ui

it not only has the mute button (which it had the volume button though), but also has the seek bar which works on many videos even if they don’t allow it in their player, since it can use cached videos for it, also it displays the devices like Chromecast where you can cast your videos if supported by the video as you can see here: 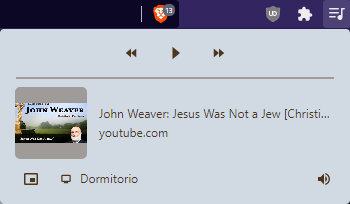