Unfortunately, the app is marked as Pre-release on GitHub, which causes apps like FFupdater ignoring this release. It would be if github tagging was always aligned with what actutally is at Play Store. I’ve observed this also a few times in the past.

Oh, apart from this, according to brave.com/latest the newest version is v1.44.114, while Release Notes on this forum say it’s v1.44.112 https://community.brave.com/c/faq/release-notes/98

Now, according to Gh and this forum, the newest version is 1.45.113, while play store and brave.com/latest and Play Store still have the old one

Thank you! Does this mean the GitHub pre-release tags are fixed now?

This is quite important, in particular if someone installs brave directly from GitHub and wants to keep it up-to-date, or uses tools like FFUpdater to do it.

Hey @Mattches, there’s a mismatch again. In play store, the newest version is .120, but on github it’s marked as pre-release (so the newest release is .116)

Probably there’s a bug in your deployment tools. I think it’s quite important from security point of view to keep the newest version number aligned

Release on Google Playstore (GPS) is a phased released, meaning not everyone gets update automatically unless its released 100%. You can’t manually update via GPS similar to how you do on Apple AppStore by visiting the app page to pull in the update. Google controls phased release as to who gets the update when, we don’t have control on it.

Every non-public release on the release channel will have a pre-release tag set which means its only available on GH and not released to public via updater.

Thank you @sriram for the detailed answer. My concern is that, the .120 release seems to be the public one, as it is pushed to GPS, but on GitHub it is marked as pre-release. This unfortunately happens from time to time, and may be confusing to users who don’t use GPS 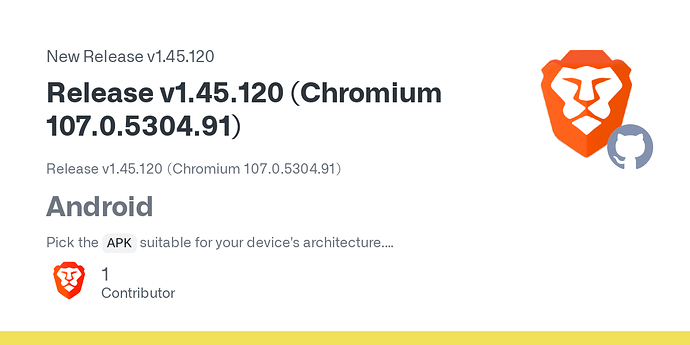 I’ve encountered this problem trying to use Brave without Google Play services. FFUpdater and any other source that relies on GitHub releases to notify of updates get behind because releases aren’t always labeled as “Release”.

offtopic, but: It’d be nice if Brave could have a built-in update check, not unlike bromite

My concern is that, the .120 release seems to be the public one, as it is pushed to GPS, but on GitHub it is marked as pre-release.

This could happen when a build is not made public on release channel and later its pushed in GPS. I don’t think there is a way to automate this to remove the label as soon as its published to GPS. Will have to be a manual process