I have tried the tips that Brave Support has offered such as use hardware acceleration when available. This did not fix the overload on CPU, so I deleted Brave. At the time I deleted Brave I was using macOS Catalina version 10.15.3. on the date 3/24/20

Then I installed macOS Catalina 10.15.4 on the date of 3/24/20 then re-installed Brave and opened the website that was causing me issue – https://login.exeterlms.com/ (Woz-U)

Finally, I opened Task Manager and noticed the problem did NOT stop.

@Derek,
Did you try changing the flag suggested in a previous reply above?

I tried the suggestion as mentioned and noticed no difference, so 100%+ CPU usage.

A new profile does not have the issue but it would seem to defeat the purpose to lose all the BAT earned to fix the problem. Is there some way to reset the Ledger service somehow while maintaining the BAT? Or even to better profile/isolate what is wrong. I wouldn’t mind losing the BAT even IF it was in service of a permanent solution. I don’t like doing it if the problem could reappear for me and others.

A new profile does not have the issue, so something in the profile is at issue. But losing BAT among other things whenever this crops up seems like a punt of a workaround. I’m happy to do more digging with some guidance to narrow things down more if I can. Anyone involved with the BAT Ledger Service I could work with?

I’m getting the following spikes.

Also, it’s preventing me from dragging the window away from one monitor to another.

@pinc,
In this context, when we say task manager, we’re referring to your browser task manager, as opposed to your OS’s task manager. You can view this by going to Menu --> More tools --> Task manager 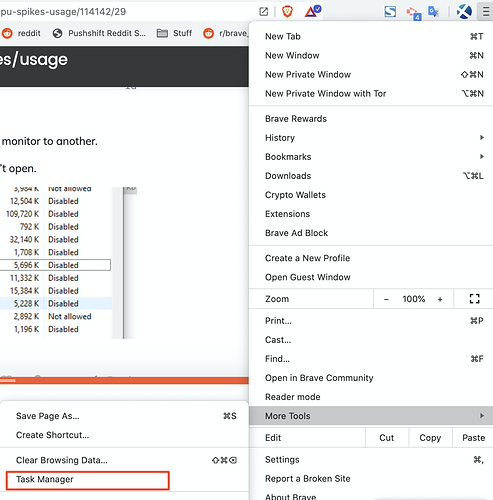 I too have been experiencing random CPU spikes from Brave that occur every 15-30 minutes. Usually I would go from 0.2% CPU usage to 50% usage. I normal experienced these spikes during periods of idle or video streaming.

After enabling brave://flags/#brave-adblock-cosmetic-filtering I saw a noticeable performance boost of about 15% less average memory and CPU usage but I was still seeing CPU spikes randomly. Next I disabled all my extensions and the spikes went away. I started 1 by 1 introducing my extensions back and I think the culprit was an extension called “Flash Video Downloader”.

I will continue to monitor and will update if anything changes but if you are experiencing this behavior try disabling your extensions especially video related ones.

@Blassphemy,
Thank you for the detailed report! Appreciate the feedback and I will have the team look into the Flash Video Downloader extension and what may be causing the conflict.

I can confirm that CPU spikes have something to do with browser extensions. Disabling ClearUrls and HTTPS Everywhere helped. No more CPU spikes and browser freezes.

It maxes 1 core as soon as it starts. Even idle. Looking forward to an update since I like brave, but have been unable to use it for a while now because of this bug. I’ve tried reporting it but had my old account flagged and frozen/removed?

I don’t have the problem. I don’t know if this will help or not but I run Lasso and it controls cpu use by spreading the workload over all cores.
If those of you with 100%+ cpu use have a drop by using the free program it might help them narrow down the problem,

PS: I currently run 30+ tabs because of crappy memory in my brain matter. 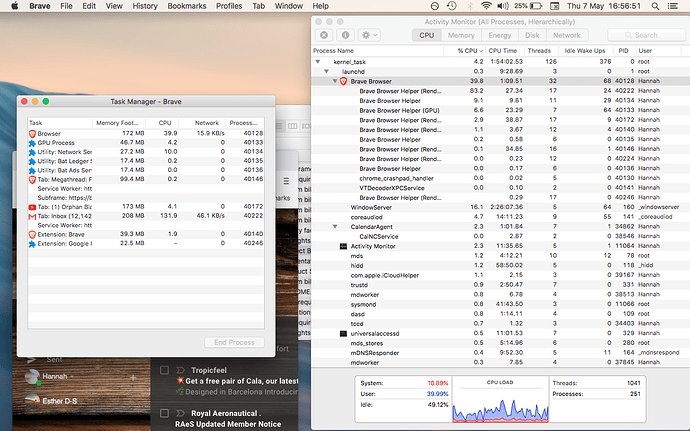 Hello, I need help . My pc is getting crazy with brave Version 1.8.95 Chromium: 81.0.4044.138 , almost 6 months using it everyday and still there is not a fix for the high use of pc . Check the pic , Im just with 2 windows , and the task manager says very high use , just 2 windows?? . Also sometimes the videos of youtube are slow , the browser crash many times at least 3 times per week . What’s going on ? . I did everything that you mentioned , i enabled the cosmetic filter , disable the hardware acceleration and nothing , no change . My pc is core i7 , ram 8 gv , nvidia 1050ti so its not my pc . I need help ! 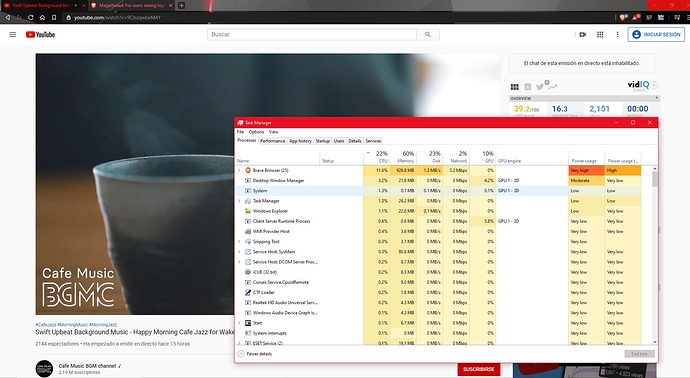 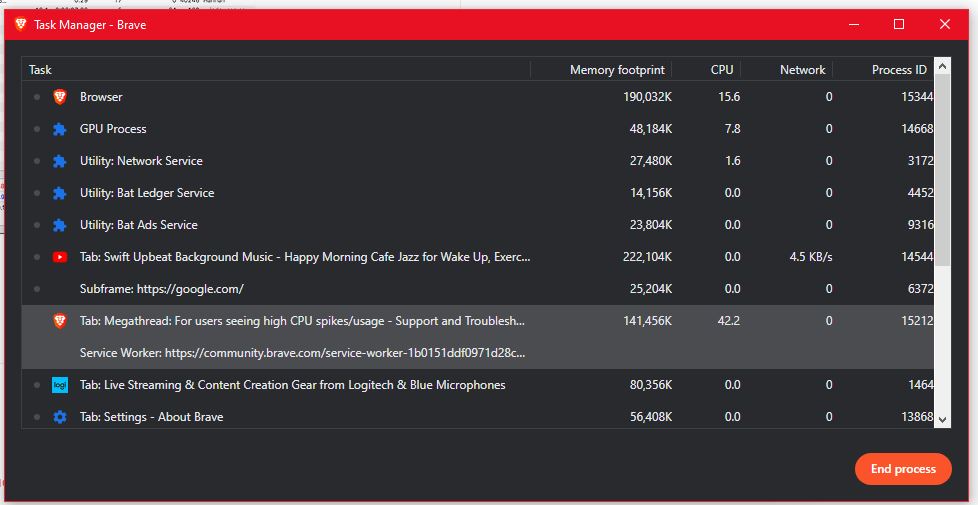 I have a Macbook with MacOS 10.15. I’ve been using Brave for a while now and this is the second time I’ve noticed high CPU usage with a new Brave build. The latest build 1.8.96 seems to have high usage with streaming sites mainly. So I decided to check if the problem is with the nightly build 1.10.54 and I see lower CPU usage on the nightly build. These 2 builds have the same settings and extensions.

There doesn’t look like a big difference but this difference determines if the fans are blowing or not. I’ll stick with the nightly build for now. Hopefully the nightly doesn’t break my cpu also. 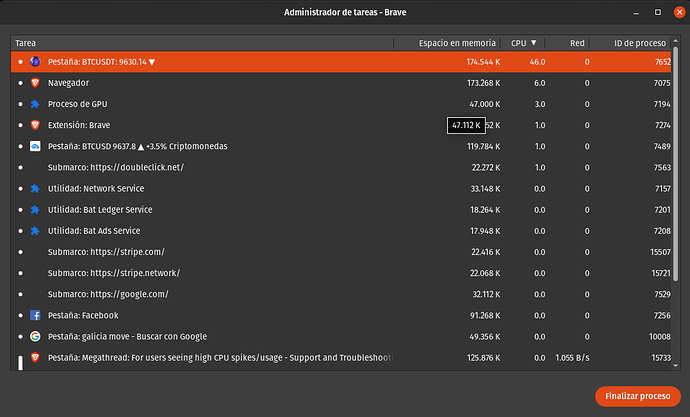 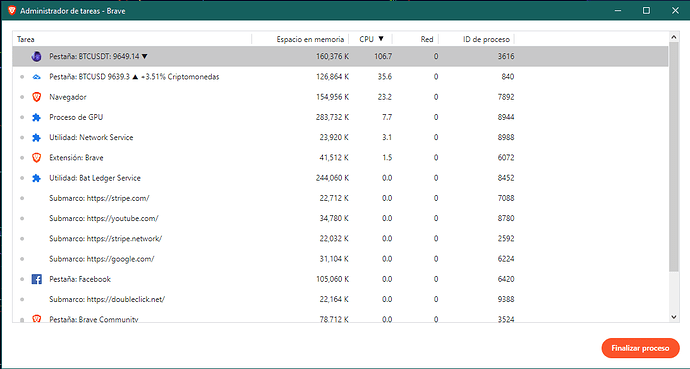 Hi,
For solution read the strong text only.
I have also experienced this issue with CPU consumption spikes. It happened when browsing using Brave in Linux Mint 19.3. Every spike lasted from 1 to 5 seconds roughly. During this period computer was completely frozen! Every spike was usually represented by extreme increase in consumption of one of the CPU core (out of 8 cores in my case - see the pictures). These spikes came sometime one in every 20 seconds and sometime one in every couple minutes. Especially when switching tabs or opening/refreshing more complex websites like market charts at tradingview.com or Youtube. Very annoying.
Anyway after trying many recommended solutions (including disabling extensions or enabling cosmetic filtering) only what has seemed to work for me was to disable hardware acceleration at brave://settings/system (hamburger menu > additional settings > system > disable “Use hardware acceleration when available” > Relaunch).
So far so good. But there are still “microspikes” but these are probably related to the Linux itself because it happens also when the Brave is closed. And these much less bothering spikes manifest them-self by disrupting audio playback for a moment (by repeating last microseconds of audio during half second or so). I did not find solution for this yet. But the main problem is solved so far.
But back to original issue. Here are some graphs of CPU consumption during the problematic spikes (in Linux System Monitor):

When disabled “Use hardware acceleration when available” 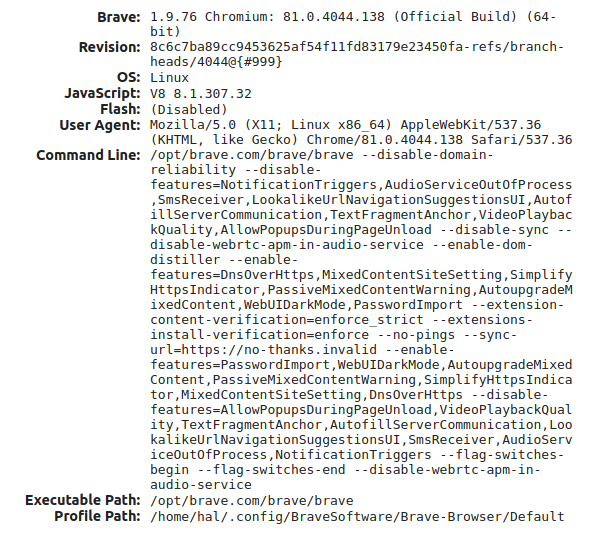 Pain in the ass

Coming from Windows to Linux and this is only one of many issues I deal with (other are no Brave related).

Hardware acceleration is disabled
Enabled Cosmetic Filtering is Enabled
Fans are running at 4k RPM and temperature gets to the 70°C.
It’s like I’m running The Witcher 5 in Ultra or Launching Falcon Heavy to Mars.
Any solution would be super appreciated please ! 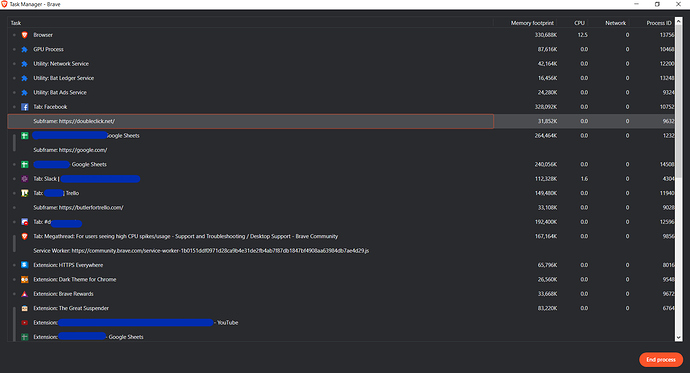