Hello. I downloaded Brave for mac from the brave.com yesterday. Upon opening, installation failed, and the program was mounted instead as a disc image. It actually works as a disk image but it opens two icons in the doc, and will not quit or force quit…(I kept trying to make it install, so I don’t know if I forced two instances of dock icons… but only one disc image shows on my desktop). I had to manually shut off the computer to make it close. After re-start, opening the disc image prompted me to install, which again failed… and the saga continues. It does work from the disc image (I am using it now) but would like to actually install it… I don’t truly understand how the whole disc image thing works, but in the past, dmg downloads have successfully installed. I need to be able to quit the application and restart normally, not have to shut off the computer… Also, I spent some time setting it up, and expect I will be told to find all fragments of it and delete… will all the setup work be lost, or can it be moved to a new download… and has anyone successfully installed it in High Sierra? Thank you very much for your time.
*Version 0.66.100 Chromium: 75.0.3770.142 (Official Build) (64-bit) is what runs from the disc.

A disk image is a file that the computer can mount and pretend is a removable drive. It acts just like a thumb drive or CD-ROM. Usually you don’t run desired applications from disk images, the exception being when there’s a program ending in .pkg, which is an installer package. Every time you’re double-clicking Brave in the opened window, you’re running Brave, not an installer, so that’s probably why it seems like you can’t quit it.

First thing, after reading this if you’re using Brave, or while you read this using Safari, is to quit Brave (both instances if two are running) by clicking any Brave dock icon with a running indicator (dot underneath usually) and then using File menu and selecting Quit.

You already downloaded the disk image to your Downloads folder:

If the disk image is already opened with a Finder window opened, like the one below, great. If not, go ahead double-click the downloaded .dmg file and it will open a Finder window like this: 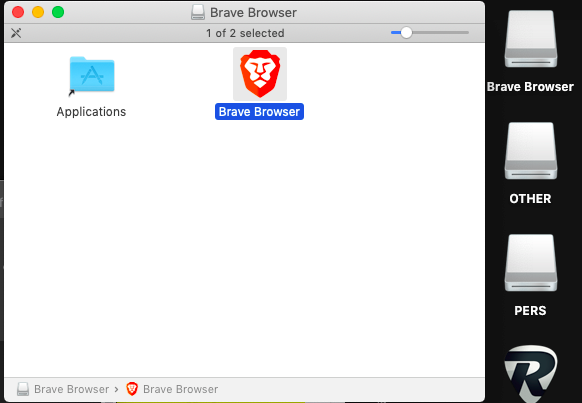 To install, you just drag Brave to the Applications folder shortcut in the window and let go once it darkens:

If Finder prompts you to replace Brave, go ahead just in case the last install/copy somehow went bad.

Once that’s done, open Applications (in Finder, Go menu, Applications) and open Brave from there. While the Applications window is open, eject the Brave Browser disk image if it’s visible in the list of Locations on the left. 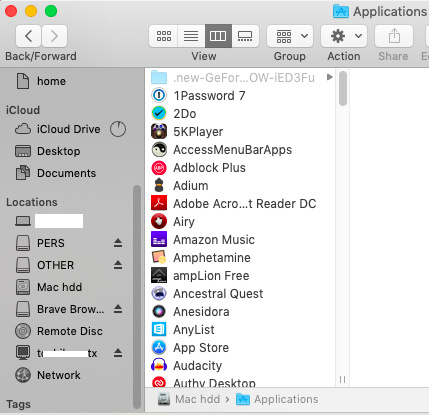 I’m not sure whether your setup work will be lost, but I suspect not. I just tried running Brave from the disk image and it was able to use all my preferences from the hard drive copy, so I’m thinking it will work the other way 'round for you.

Thank you so much for your comprehensive and detailed answer. I had already dragged the Brave installer into Applications when I originally downloaded it, but for some unknown reason, I received a message that installation had failed, and Brave was being installed instead, as a disk image. I was using the disc image, which created a new icon on the right side of my dock, but even with the failure, a non-working logo from the app was retained on the left side of the dock.

After my first session, neither logo quit from the file menu on the dock icon, and I was unable to Force them to quit through any means (apple logo, icon in dock, file explorer…). I powered off manually, and restarted. When I did, I again tried to activate the application’s doc icon, and it messaged that I was using a disc image and should install the app for a better experience. I pushed yes, it went through the verification process, and again I got a message that it could not install the app, and would run from disc image.

Today, after your comprehensive review, I quit the disc image Brave icon on the doc…(the one placed to the right) and waited patiently… and it actually did quit, and the logo disappear. This time the second dock icon also quit (the dot turned off) but the logo remained in place on the left. (I suspect the shut down and restart helped it to function normally again.)

I then followed your advice, (albeit backwards) and ejected the disc image… (which I had been afraid to do). Yaaay!! When I again tapped the single application icon on the dock, Brave ran normally and no second (disc image) icon appeared. As you suspected, I did not lose any settings, and as an added plus, I am no longer using so much memory… as in the past, brave was running both from the app and the disc image, eating up almost double the amount of cpu’s, energy and RAM.

In summary, despite messages that installation had failed, the app seems to be working fine, quitting normally and reopening with settings intact. As an added bonus, by following your advice and ejecting the disc, I no longer have the resource-wasting complications of two instances of my Brave browser running simultaneously. Thank you, thank you thank you! I am incredibly grateful for your clear and detailed response!