Description of the issue: images will not load in Gmail when composing an email despite enabling all cookies. This does not happen in Chrome, Safari, or Firefox. 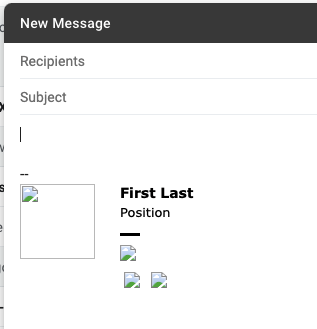 Additional Information: I realize there is a very similar related post, however the “enable all cookies” fix did nothing for me which is the reason I’m posting this.

Description of the issue: Images not loading on gmail when composing mail. Images load with other brwsers just not Brave. See screen shot attached. [Error with Gmail - Brave -2020-07-13 161612] Expected result: Reproduces how often: ALWAYS Operating System and Brave Version(See the About Brave page in the main menu): WIN 10

Thanks for the information. Can you tell me if this occurs just when sending/attaching images in a composed email, or do images sent to you also appear as broken?

I’m also curious if you have any extensions installed in the browser at this time, as one of them may be causing a conflict that results in the broken image.

On my end, images appear correctly when attached, copy/pasted or drag/dropped into a composed email (used a couple of random screen shots to test): 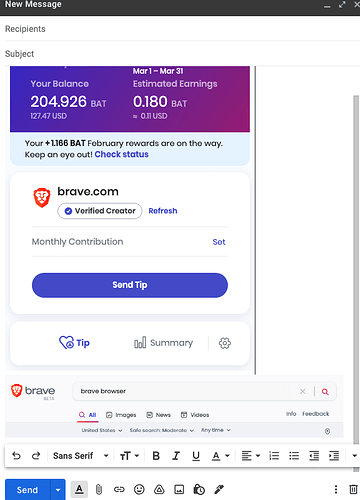 Using Brave Browser v1.37.116, I sent a New Private Window to Sign In via webmail at my e-mail host.

I composed a new message and drag-copied the icon for an image file, from my Mac Desktop, into the realm of the composition - new message window.

The “Here is an image . . .” text, preceded the drag-copying effort.

I managed to create a screenshot half-way thru the drag-copying action . . . and that screenshot captured the following - the icon for the image file, ‘in flight’ you might say:

But, when I released the mouse, in the area where the vertical cursor exists (roughly under the “i” in “Here is”):

I have an email tracking extension called Trocker (https://trockerapp.github.io/) that appears to be the source of the problem. Upon installing it, the images show up as expected in the email body. Thanks for pointing me to the solution!

@pokari,
Glad to see you got to the root of the issue.

@289wk,
So basically you’re saying the images do get added to the email when dragged/dropped, but they don’t show up until the email is actually sent (and subsequently opened) is that right?

Image files do get added. Ran another test - better screenshots:

Next, landed - in effect, indicated by the little field (showing the name of the attachment) that is immediately above the blue-border-line . . . but no show within the message body . . .’

When the e-mail message is received, the image file DOES SHOW within the body of the message.

Let us say, I ‘Cancel’ that warning, and I add some text . . . and then I send the message . . . then the message is sent without any further warning.

Very strange — can I ask what email provider you’re using?

Uh . . . no, but thanks for asking. I do not have an issue (I work around it) - I was only trying to help the OP and yourself, with confirmation of what happens.

Yet, it may be of interest, that my e-mail host does not use anything that would get the attention of Brave Shields. No ads, no tags, no trackers, no javascripts that need to be blocked.

I just used Firefox v99 . . . to confirm that the ‘failure to show’ is likely to be a webmail issue . . . and, not exclusively a Brave Browser issue:

Might not be an issue at all, as long as the ‘Attach . . .’ field for webmail users, is satisfied.

Possibly, there is some reason why the webmail host does not provide for the appearance?