How to see Brave's 'Task Manager' on a Mac?

@mattches I don’t see a native Brave ‘Task Manager’ when I click on the hamburger menu option.

The same Task Manager appears as the one listed in the Mac’s ‘Window’ dropdown menu.

Is Brave’s preempted by the Mac’s own Task Manager? (I would like to be able to see Brave’s.)

Screenshot below (from Create a new profile to help Troubleshoot)

@mk7z,
The steps you listed above are correct — here is me accessing it right now:

Alternatively, you can right-click on an empty space at the top of the browser (next to where the tabs are) and select Task manager from there: 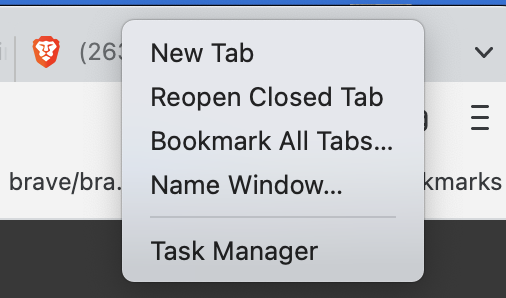 Alternatively again, you can click Window on the macOS Menu bar at the top and select Task manager from there:

@mattches With those options I’m getting the same ‘task manager’ as macOS’s.

The referenced article, which I believe you wrote, noted that Brave’s Task Manager is different than the one in Windows. It also appears to have considerably more detail than macOS’s, which is why I wanted to be able to view Brave’s: 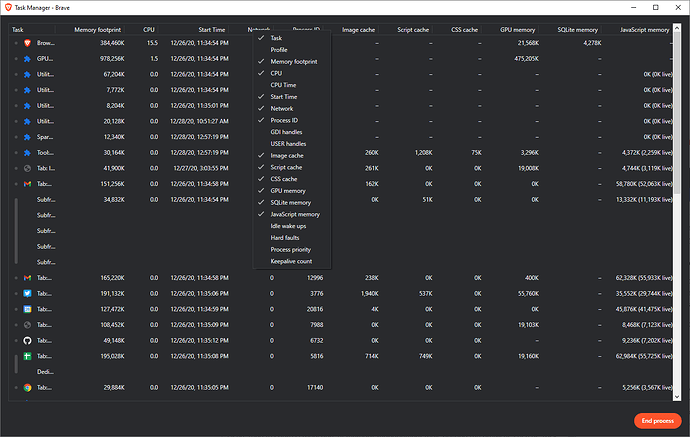 Although the screenshot in your article is from Windows, I assumed that Brave’s native task manager would show more than macOS’s does.

If I’m understanding you correctly, the combination of what Task Manager and Activity Monitor display on a Mac is combined in a single ‘task manager’ view in Windows. [?]

Apologies but I do not understand what is being asked here. The Brave task manager — that you successfully opened as shown by your previous screenshot — is the same in Windows as it is on Mac.

Windows task manager and macOS Activity Monitor are essentially the same thing but for different OS so they will, by nature, appear different and show different data since, again, the mac and Windows OS are completely different platforms.

Well, I’m not understanding something either. Activity Monitor and Task Manager are completely different from each other on a Mac. They don’t refer to the same thing.

The screenshot in my previous reply was of the Task Manager.

In any event, it appears that the Task Manager you appeared to distinguish from the one in Windows in your article – “Brave comes with a built-in Task Manager. You can find it in ☰ --› More Tools --› Task Manager. Unlike Windows’ Task Manager,” . . . etc. – doesn’t apply with a Mac.

@mk7z,
Yes, that is the activity monitor. The Brave’s built-in task manger is what you shared a screenshot of here:

How to see Brave's 'Task Manager' on a Mac? Desktop Support

@mattches With those options I’m getting the same ‘task manager’ as macOS’s. The referenced article, which I believe you wrote, noted that Brave’s Task Manager is different than the one in Windows. It also appears to have considerably more detail than macOS’s, which is why I wanted to be able to view Brave’s: [image]

What is the confusion here?

@mattches I can’t explain it any better than I already have. What I quoted above from your article refers to two different task managers – Windows’ and Brave’s.

In any event, there is no separate Task Manager in Brave on a Mac (i.e., one separate from macOS’s), so we can call the issue ‘resolved’. Thanks.

Yes, there is. There is the Brave Task Manager (the one built into Brave, that shows only Brave related processes) and then there is the “Activity Monitor” (the one that comes with the OS):

@mattches OK, so the feature named “Task Manager” displayed in Brave on a Mac is Brave’s, not Mac OS’s.

Whereas Windows (according to your article) has a feature it calls “Task Manager” that is separate from Brave’s “Task Manager”. The equivalent of that on a Mac is called “Activity Monitor”.

Is that the correct summary?

Yes that is correct.