I have a problem with Google search results.
For example, if I write “Brave”, in the main section, after 2 seconds, the initial content disappears.
Seems like Brave is viewing it as an advertisement.
I tried to reduce the ads by clicking on the Lion Shield in the search bar but nothing changes.
If I open a private tab, however, this problem does not arise.
I am using the latest version of Brave (Windows 10 Home). 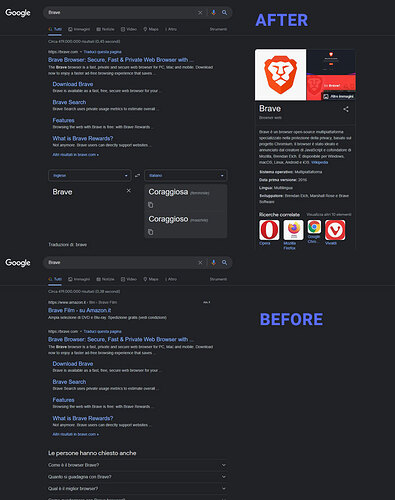 Go to top-right corner hamburger menu and create a new test profile. In it, do not change any settings or add anything. Do an experimental search on google search engine and see if the same stuff happens.

Have you added some extra filers through brave://adblock?
Which extensions are using currently (disclose only those which are comfortable telling others)?

I think that brave is blocking first party ads, as it normally does when it is turned to ‘aggressive’ mode. But an extension is then over-riding it and injecting its own add. A lot of extensions inject add on a search engine to make some extra money.

Seems like Brave is viewing it as an advertisement.

To be fair, it is an ad. If you look on the right side of the initial result, it tells you that it’s an Ad by Google. It’s a place that paid to have their result appear on top. I tried to crop around it, but if you look to the right it says Ads with an X next to it to close. I remember people complaining about them not long ago and Fanboynz tweaking things a bit to eliminate them or something, can’t remember the specifics.

I tried to reduce the ads by clicking on the Lion Shield in the search bar but nothing changes.

Just clicking on the lion does nothing. You’d have to change what cookies and/or Tracker & Ads you want to allow. What settings have you tried changing and what settings are you primarily using? I’m guessing that’s where you’re going to notice the big difference.

If not, then only other thing would be as chh_68 mentioned, would be an extension causing the problem. When you open in a Private Window, it runs without extensions as well.

Hi @Saoiray, thank you for your reply.

By “clicking on the Lion Shield” I meant that I clicked and changed its settings, sorry if I wasn’t precise enough in that sentence.

However, I noticed the word “Ads” too, but I think the message refers to “Brave Film on Amazon”, it has nothing to do with the main hidden box which are, in this case, the official website of Brave and the related Wikipedia page (and these are not Ads but rather useful info).

Another example, if I search “sport” on Google, the browser shows me the latest Google news related to the football championship, but even in this case the main box will be hidden few seconds later in the same way as in the previous attachment.

However, in the end the problem was just related to an add-on, by deactivating them all at once and activating them one by one I was able to understand which one was creating this problem.
Thank you for taking an interest in the problem.

Hello @chh_68, I tried your suggestion and it helped to reach the final solution.

I created a new profile and, as in the private windows, the Google result worked well.
So the hypothesis about the interference of an add-on was actually possible.

I decided to deactivate all my add-ons at once, then I reactivated just one and did a Google search to see how the browser behaves.
I repeated this operation until Brave showed the hidden error.
In my case, the issue was caused by “What Font - find font” add-on.

Now the problem is solved, thank you so much for your help.

@fanboynz I had a question for you

I’m not sure if that is a thing, If a user installs uBO while shields is enabled (on standard). uBO will just block any missing stuff. We have no special filter exceptions for google, the 1p vs 3p is just in the Brave code, so uBO would just block it regardless.

That said, if you’re on Brave + uBO, Ads/Trackers should be disabled to avoid any potential issues. Brave Shields won’t “override uBO cosmetic filters”. If an item is blocked as a network item in Brave shields, it’ll remain blocked regardless of uBO.

There is a misunderstanding here. The extension I am referring is not UBO but ‘What font -find font’ which was injecting google adsense ads for the above user who made the post.