If it’s in a ‘Nightly’ build it might be wise to wait until another build becomes available, and if the issue persists in the next build, report it on GitHub (IMHO).

Hello.
Long Time Brave user and only recently updated to the latest build. I held off for a while and immediately noticed the downgrade in performance. Reading a lot of this thread I disabled HA and all my extensions and that has kept my CPU usage down. It does spike depending on the website, mostly YouTube. The extensions I had where De-Mainstream YouTube, MetaMask, Captial One. Prior I’d see two Brave Browser Helpers running and a third running on the GPU. So far my CPU use is at 50% if I’m watching any videos on the browser.

Its not a “Brave browser issue”, Some extensions will change over time (various updates or no updates) and will impact performance. Ideally testing a clean browser profile, then testing the various websites. Which will give you a base line, then enable one extension at a time.

Hardware acceleration issues are mainly caused by the hardware and drivers, often on board gpu (laptop) will cause the most problems.

I also noticed the same problem compared to previous versions, the amount of lag and performance degradation is insane. Graphics rendering is so slow and the longer you use brave the slower performance it gets. I refreshed and made a new profile which helped but after a few hours of use the laggy performance came back. I have all drivers updated and even tried turning off Hardware Acceleration and no luck.

I went to check out Firefox 93 to see how everything compares and what a huge difference compared to the latest version of Brave, no lag and you can open tons of sites at a time with heavy graphics with no lag, just smooth performance. I tried everything I can think of from making new profiles, reinstalling and no luck.

I also find that after about one hour of heavy usage the performance goes downhill very badly of the entire browser like the browser is failing to clean up memory and do trash collection, I have 64 GB of memory but turning off the browser for a few minutes and turning it back on makes a big improvement.

What is a best way to replicate this? Which site shows the biggest differences?

I can confirm the same problem. Almost 100% of CPU is used with only one tab opened with any website. Problem is mainly in incognito mode. At first problem was only on Brave Nightly, but now, the same thing is on Brave Beta (also incognito window). At the moment that browser (except stable release) is completely unusable.

Going through previous Nightly versions. Can this be confirmed?

@nqsfpd @flasher777 @ZCowa If you can test https://github.com/brave/brave-browser/releases/tag/v1.33.2 (removing the previous Nightly) Is that last “good” Brave Nightly ver?

I’m getting this on the Brave Beta build too - happening only with Private tabs however I’m still getting awful rendering and response times for the normal browser.

From the versions listed above problem is starting for me with version 1.33.28 (and all newer versions) - only in incognito mode. In normal window everything is fine - but when I launch incognito window CPU jumps instantly to almost 100% usage (without any website opened - just opened Private Window). 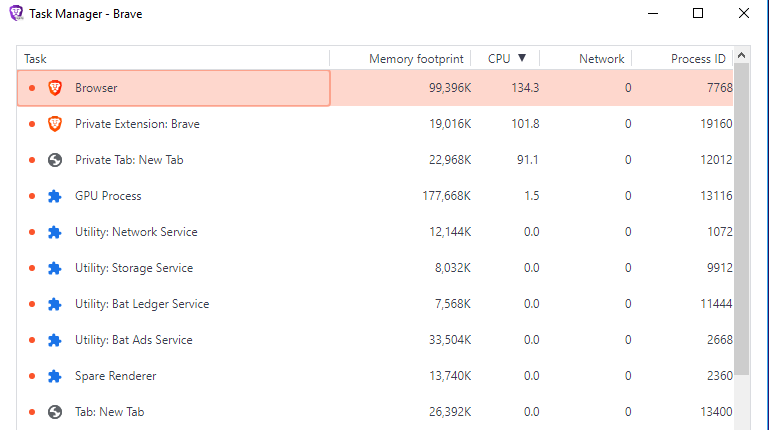 I am also facing CPU issues
It seems like it keeps one CPU core on 100% constantly. This also happens in private browsing with just a blank tab open. Looks like something is hung, its also only one singular process that causes this (the remaining ones are pretty much idle idle).

Do you have an extension that’s allowed to load in Private windows?

@JimB1 if you read carefully, you’d know the answer…

No. Extensions doesn’t matter here - on Beta I don’t have any extensions at all and situation looks exactly the same in private window. Also, as I said before, I’ve installed many versions of Nightly and the problem is appearing from certain versions (it’s possible that problem is starting even with version 1.33.27, according to @SirObby post, but I haven’t checked - I’ve tried only versions listed by @fanboynz, so I can say that the problem didn’t exist for me before version 1.33.28).

It seems that it’s a wallet bug:

Yes exactly, that’s why I asked… when there’s a contention that no extensions are involved, but you see that in the screenshot (reading carefully, right?) it makes one wonder about the contention.

If you mean “Private Extension: Brave” task, then it’s just part of Brave. You can check it yourself - run browser without any extensions and there will be the same task.

@JimB1 I think @nqsfpd answered you

My bad, I thought you were showing the Windows task manager, not the Brave one.

@macfanol , are you here to help or…?