After experiencing sync issues relating to untitled links in my Bookmarks Bar, I attempted to also export them to a html file as a backup measure. However they also will not export. The resultant html file has all bookmarks (and bookmarks nested in folders) that have titles. All untitled links are missing, which in a sense may be the root cause.

This may be related to Issue 1083 on GitHub, however this instance does not involve a mobile device.

I can’t quite put my finger on the behavior, as in one instance the untitled bookmarks did eventually come through some time later, which was odd. However on another (work) profile today, all my untitled bookmarks which had been stable and syncing (even for untitled), suddenly disappeared. Trying the aforementioned manual export revealed the untitled issues.

@joebal,
Thanks for reaching out to us.
Apologies but I’m a bit confused – are you saying that the bookmarks that were in your work profile were erased? That is, they’re no longer accessible or visible in the browser?

Hi, sorry to confuse you! So with the work profile, yesterday just the untitled bookmarks completely disappeared from my bookmarks bar. No longer accessible or visible, just gone. The titled ones remained there.

I wonder if a resync occurred and because the untitled bookmarks were not syncing, they didnt return when a sync was performed.

Perhaps – but bookmarks data, unless actually deleted on a device on the sync chain, is not actually moved during Sync. So that data can’t really “get lost” between syncing/resyncing.

So the untitled bookmarks are there somewhere unless they were moved (or removed) on a different device that was a part of the chain.

In this case the only reason a sync chain existed was due to moving to new devices, so once signed into a new device, the old device was re-imaged, so never logged into again. No bookmarks were moved.

Some test data, I have created a new user with some test bookmarks:

See attached images for shots of the actual bar, along with a shot of the exported data. 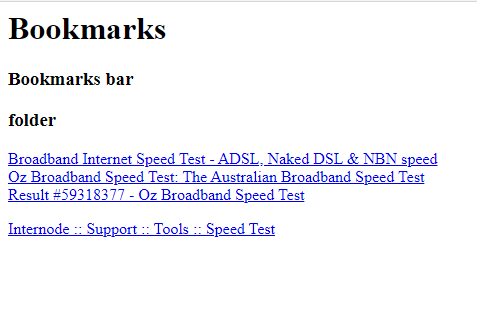 Just to add to the confusion

However they are not appearing when syncing between browsers. Have created a sync chain of 3 work devices as a test, and none of the untitled ones are coming through.

I started exporting to html, importing to Chrome, and using Chrome as my bookmark storage unit until this stuff is fixed.

That said, I have not had any issues exporting unnamed bookmarks, since I use those as well on the bookmarks bar. I don’t like all the words stretching out the icon, much like you I’m sure.