Error: region not supported to Ireland 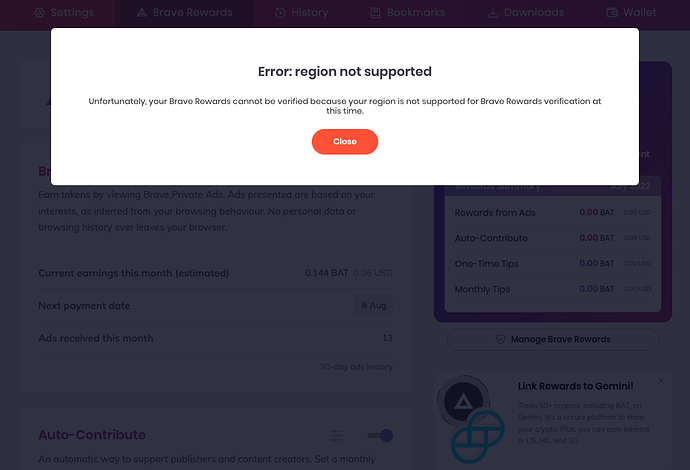 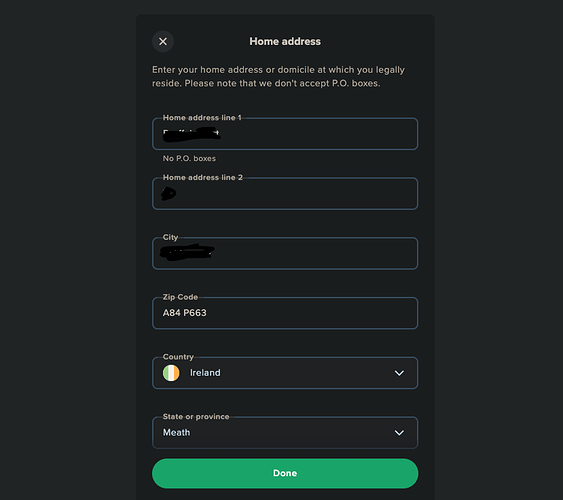 This is because the ability to connect or reconnect to Uphold is down for everyone. Please stay tuned to the thread at Temporary Pause On Uphold Linking for more details and updates. 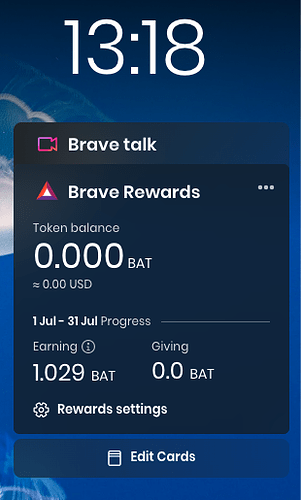 I have had the same problem that it does not allow me to connect to my Uphold portfolio for about 3 weeks and nothing has solved the problem, and that I have two Brave profiles and only one presents that problem.

Hey @AuroNPL . Things should have been back up and running for you. I wanted to reach out to see if you’ve been able to link with Uphold or if you’re still having issues?

I’m having the same problem (in Ireland)

Things should have been back up and running for you. I wanted to reach out to see if you’ve been able to link with Uphold or if you’re still having issues?

Same problem here, Ireland is supported according to Brave’s list as well as Uphold’s list of supported countries, yet it always says region not supported. Anyone got a fix on this?

@ScareCrxw I’m not sure if @AuroNPL ever did get it figured out, but I know part of their issue is they had things set for Ireland but their passport is/was from Poland. And, well, Poland isn’t a supported region. The way things work is they use an API that communicates with Brave on the backend. So if a person had submitted a passport for a country, moved to another, updated information, but never had their passport or photo ID updated in Uphold’s system, then Brave’s system would see that old passport and have you as the prior country rather than where you’re at now.

That whole explanation out of the way, is your situation similar at all? Have you ever had a passport or any other documentation for anywhere other than Ireland that you might have submitted to Uphold?

I have Uphold in an unsupported country, but during the registration phase I used an ID from a country that is currently in the 20 supported countries, but I have not been able to connect to brave for months now

My brother have Uphold (registered Ireland), three month ago was received BAT to Uphold. Today still unverified to Uphold.

Yes my passport is Croatian, but was issued in Ireland, in the Croatian embassy, which is stated on the passport.
Would you know if I can send any proof of living here to Uphold for them to change it?

Would you know if I can send any proof of living here to Uphold for them to change it?

Yeah, possibly. They just would need a photo ID. So like here in the United States you can use a Driver’s License if you wish. If you have the valid government ID with your information, they should accept it. Well, maybe. Let me copy/paste what they need according to https://support.uphold.com/hc/en-us/articles/202766795-How-to-verify-your-identity

However, unlike in that link I just provided, I don’t think there’s a button to do a simple verification. So when things change, you have to submit a support ticket with them and then send the new info.

Which according to their help article you would do by going to https://support.uphold.com/hc/en-us/requests/new

I have Uphold in an unsupported country, but during the registration phase I used an ID from a country that is currently in the 20 supported countries, but I have not been able to connect to brave for months now

That’s interesting. I know the whole verification backend thing is something I just learned about not too long ago as they were dealing with people in supported countries not being able to connect. I do know prior to that, the information in your Profile also worked the same way. So like if someone forgot their zip code on the mailing address, it wouldn’t let them connect Brave to Uphold.

That said, I’m assuming that both photo ID information and the information in your Uphold profile have to match. That’s just an assumption though and I can’t say that for certain. But if it’s the case, it might explain your situation where you likely have your Uphold updated with your current residence in an unsupported country and then your ID which showed in supported country. Since didn’t have a confirmation/affirmation between the two, it would have you labeled as unsupported.

There is always a problem with identities. When you register you are asked for your country of residence and citizenship. They are two very different things. A person can live in one country but be a citizen (and therefore have documents) of another country, also because often in Europe you can move without having a residence permit if the two countries have made agreements

Im from India and i have a same problem…!

I live in Ireland and have Latvian passport i used to be able to receive bat to my uphols and now it says unsupported for like a month. I contactes uphold in relation to the api reading passport info and sensing it to brave ,keep you postes

Yeah, but that might be the problem. Lativa isn’t on the list of current supported countries by Brave. Ireland is, but not Lativa. So if your identification used for KYC/AML is not for Ireland, you’ll get the unsupported region message.

So if you have any Ireland identification you can provide and have them replace, that might be just what you need to have done. Otherwise there’s going to be the API reporting you from Lativa based on ID.

Yeah, I’ll appreciate hearing back. Hopefully you’re able to get it resolved.

Yeah, but each country is different. Brave and Uphold both are American owned companies, so often get locked behind USA laws. Add in the extra layer of protection put into place to prevent fraud and you end up in weird circumstances. I mean, we’ve had people post here asking if they could use VPN to bypass restrictions when it was said certain countries wouldn’t be supported. Sadly people are willing to lie and violate Terms in order to try to get extra money.

Yeah, but that’s for things based out of that area. As you said, it adds another layer of complications. But it’s designed by American companies, so they don’t necessarily process that in the same way.

so it’s complicated with Uphold ,with Gemini on other hand ,had same issue where I was restricted due to Latvian passport but they just changed it on my request without much fuss,just verified that it’s actually me making changes and asked for proof of address instead of id from Ireland