After updating my brave browser to the latest version. It stopped showing me sponsored tabs. Before updating it was very fine and after updating this thing happened, i don’t understand why brave is changes with the updated versions which actually deteriorating the previous features.

Please solve this problem this is not only for me I’ve asked my friends to update their brave browsers and see if this happens to them too and it actually did.

A couple updates ago they put restrictions on Sponsored Images (SI). They only appear once every 15 minutes on NTP. They did this because people were abusing it. You’re likely just seeing the descrease from this change.
’
I just checked out https://sampson.codes/brave/ads/my_region/ and can see in my region, there are only 2 SI campaigns going on, both of which belong to Brave (One for Wallet and other for Talk). They have view limits of 20 times. All others are primarily Push Notifications, with a couple being Brave News Ads (which appear as IC on that side).

Hi. As stated changes were made to NTP ads delivery. See related post below. I think the changes were first implemented in the 1.41.x version…

Hi NTP ads are now frequency capped and may not appear as much as before for users who have joined Rewards. Ad campaigns vary by country, and by the operating system. In some countries, there may be fewer ads observed throughout the month based on campaign size, delivery pacing, operating systems, content categories, and that advertisers have selected to run their ads to. As we continue to generate additional demand for countries where Brave Ads are available, the consistency should improve ov…

Also, can you post your current version? The current version of Brave for Android is 1.43.89. I think there were changes to how brave fetches the ads catalog in 1.43.x. If you are not receiving any NTP ads at all, and you are not on version 1.43.x, check that all the components listed at brave://components are up to date. However, if you are on an older version, I would highly recommend that you update to version 1.43.x as ads are phased out for delivery to older versions of Brave.

How can that be considered an abuse, if you are still capped to 20SI/day?

Okay. Then what about this ?
In the same version of brave this is happening.
I’m able to see the rewards status message as “Congrats! Your August rewards have arrived!” But I didn’t received them actually in my internal wallet I did not get any claim button.
I was supposed to get some 3-4 BATs.

And this the same version I’ve noticed another thing. When I’m scrolling for brave news Ads they are being loaded but the earnings for that news ad is not being added to the balance.
I’ve noticed all these things and stated that this update is deteriorating old features which were working fine.

Go through the screenshots attached

Because you could open 4-5 tabs at a time even if you intend to use one. Which may be considered an abuse and not normal behaviour.

It is okay I’m not worried about that. But once go through my last reply . The problem is something else

Again, you can only do that up to 20 ads, what they did is essentially trying to prevent you from getting those 20 ads.

When you get brave news ads, you have to scroll really slowly, if you don’t get the bat, try going up and then down slowly. It was done because people scrolled down too fast for the brave team’s taste.

One every 15’ is 4 per hour. Staying in front of the PC 6-8 hours a day is not uncommon nowadays, especially if you have a desk job.
It will also sell better to advertisers, since it will discourage people to spam new tabs just to get SI.

How can that be considered an abuse, if you are still capped to 20SI/day?

This is what I said is the new limitation. Prior to that people basically had no caps. So just sitting there and opening New Tab repeatedly was able to infinitely get you BAT to a point. I forget what the cap was, if any, but I know it was a lot more than 20/day.

The issue is that there are a lot of Users who see this not as a browser, but only as a “crypto mining” type of endeavor. They are running it on as many machines and emulators as they can to try to just earn all the crypto they can. Obviously that’s not the intent or purpose of Brave.

Whenever something good comes out, you’ll always have a bunch of people who try to abuse it and turn it into something bad. Another way of saying it is there’s always someone who has to do things they shouldn’t be doing, which ends up ruining it for everyone else.

earlier i used to get 3-4 notification ads ,now 1 or maximum 2 ads in whole day ,definitly ads reduced a lot ,they thought limiting new tabs ads is good ,so that earning will distribute more efficiently but they its not the case,they reduced ads to all users

brave is good alternative to chrome ,i now use firefox and brave

but reducing eraning to this much is wrong step ,now you cant even earn 0.1 bat in whole day

now you cant even earn 0.1 bat in whole day 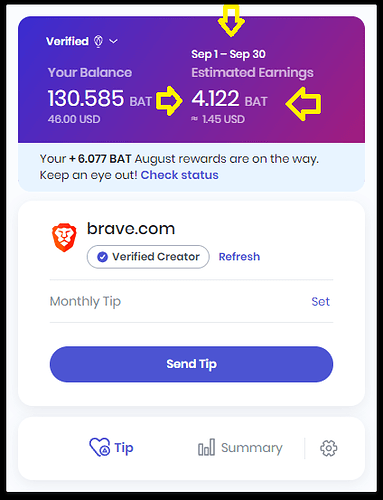 I’m already at 4 BAT just for this month. What matters is your notification settings, how often you use the device, how many ad campaigns are in your area, and whether those campaigns are targeting your device type. I talk about some of that at Understanding Brave Ads Catalog Viewer

you already at 4 bat

currently their are 10 campaigns running ,out of which 7 are for windows ,still only 1 or 2 push notification ads

may be they are targetting windows 11 devices

about notification setting ,i think its correct because im getting 1-2 ads

any suggestion or im missing anything ,i use brave for reading purpose and watching videos

For that, it’s things like making sure you have Focus Assist completely off, including any automatic settings. 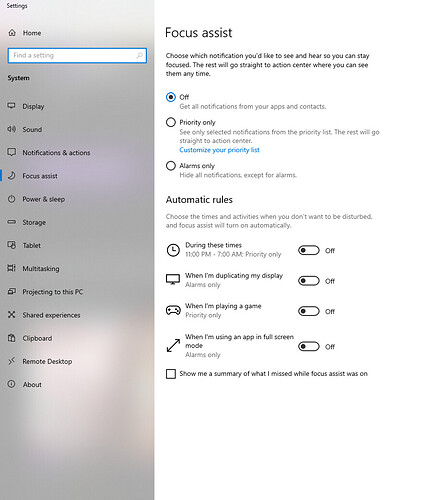 Then, for what it’s worth, my personal settings for Notifications is as follows (I’ll show step by step. I’m on Windows 10 btw)

Then find and click on Brave (not the toggle, though you want to make sure toggle is set to On) 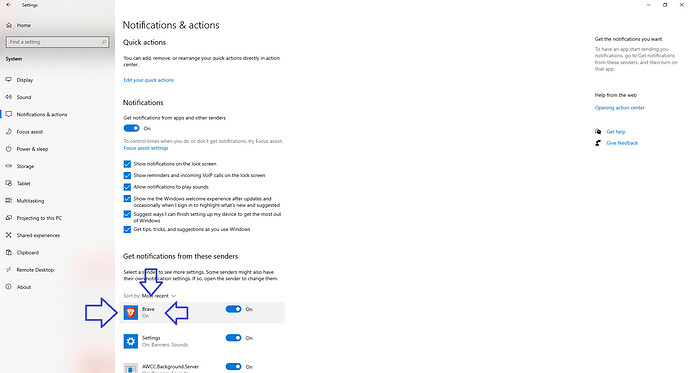 And then just have settings as below. The purpose is it makes sure notifications show, but it doesn’t annoy the heck out of you by popping up on your screen or dinging every time. In a sense, you’ll never even see an ad unless you open the Notification Center, kind of like you saw in my first screenshot in the step by step portion here. (where I did yellow and blue arrows. Below that was two ads from Brave)

thanks for helping me out ,but almost all setting are same as yours,most probabily indian users affected by this ,looks like some problem from their end ,lets hope for the best

Also, just so you know:

Currently 19 campaigns in my area. 12 of them targeting Windows.

Also keep in mind watching videos in full screen, playing games, etc will pause ads. So if you watch a lot of YouTube, play games on your computer, or anything of the sort…it will reduce the amount of ads you see.

What I’ve also learned is how often you use the device matters. Such as my Android has just been laying around and not getting used much. It went from earning 5-10+ BAT per month to not even earning 1 BAT a month.

Keep in mind Sponsored Images (SI), which are also known as New Tab Page (NTP) ads, tend to pay about 0.01 BAT each on average (at least from what I’ve seen here in United States). If someone really wanted to push for it, that could be 20 ads at around 0.01 BAT per day, which is 0.2 BAT per day. Other way to look at it is if you get just one SI per day, there’s roughly 30 days in most months, so you’d still be getting 0.3 BAT per month just from NTP.

So yeah, when you say can’t even earn 0.1 BAT in a whole day, it should unless you have no NTP ads available in your region. But still should hopefully be seeing enough push notification ads daily. Granted, would require you to get 10 NTP ads. At one NTP per 15 minutes, it’s roughly 2.5 hours to get that 0.1 BAT. Kind of crappy just in that.

This might be another part as well. If you check what each ad pays you, I don’t know if your values are the same as mine or less. It’s possible yours is reduced, all depending on how much they are charging businesses for ads in your region. I’m not sure if Brave Ads are the same price/fee in every country. But it would make sense if they adjust it based on the region.

I mean, $1 can go really far in some countries. If they charged too much, they wouldn’t really be able to get some of the so-called “third world” countries to invest.

i didnt know that watching full screen videos will pause ads,however i mostly watch youtube in half screen mode

yes bro ,the ads price is 10 times lower than your location ,thats why earning is less in india