What Operating System and Brave version are you using (Menu --> About Brave)?

Is your browser wallet currently verified? (yes/no) No

What date did you verify your wallet?

Have you been able to successfully receive payments in the past? Yes

Does your device pass the SafteyNet check (Android only)?

Have you manually turned off Auto-contribute on all of your devices linked to Uphold?? Yes

For three months now the claim button doesn’t appear and the reward are on the way just disappeared then all the coming reward just gone. been report this long ago. but the problem still occur again.

Claim button doesn't appear for this May payout Rewards Support

**Claim doesn’t appear for this month. Last month there were problems with payout also, I got only 0.25 Bat, But the problem got fixed several days after. But this month payments doesn’t show the claim button after the notice that say your reward is on the way disappeared. ** [Screen Shot 2022-05-15 at 7.43.04 PM] What Operating System and Brave version are you using (Menu --> About Brave)? Is your browser wallet currently verified? (yes/no) Unverified What date did you verify your wallet? … 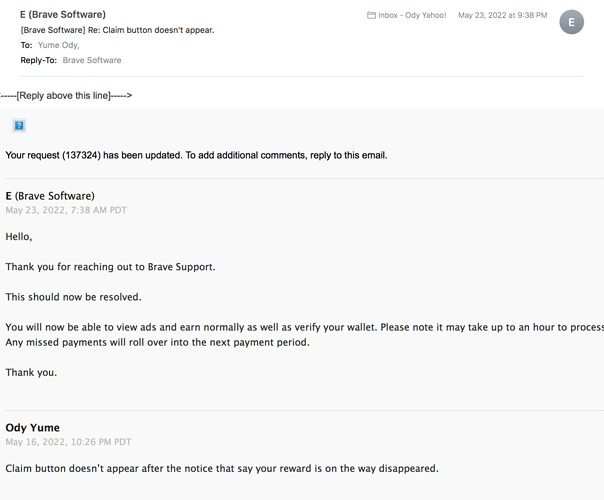 here is the prove of screen shot for this month payout. 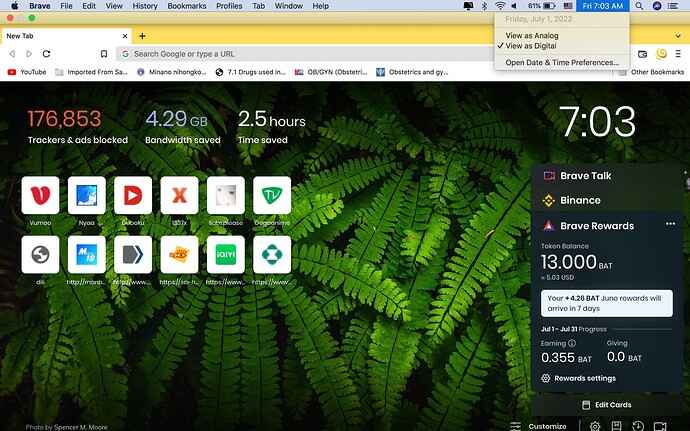 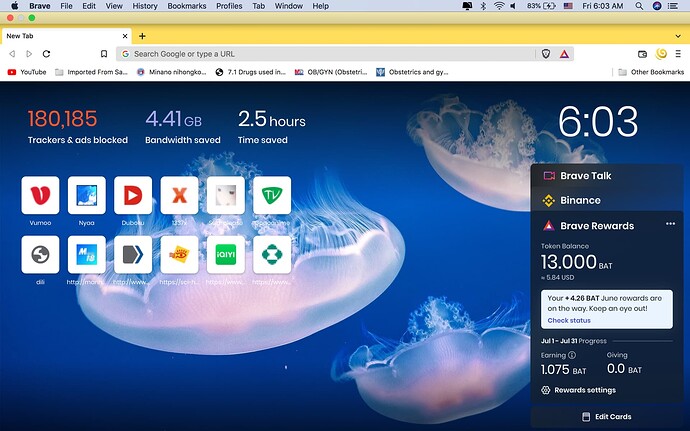 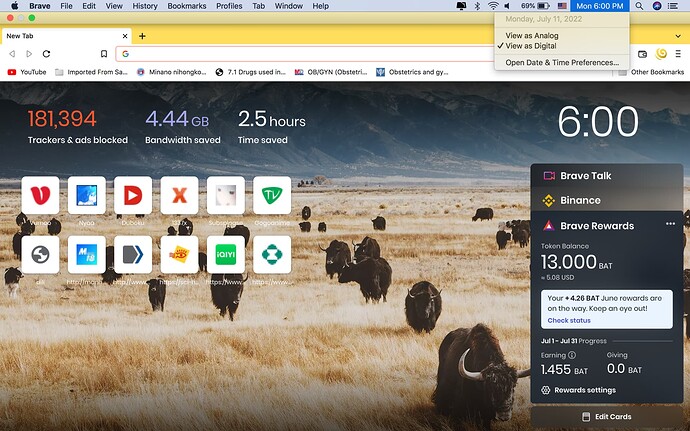 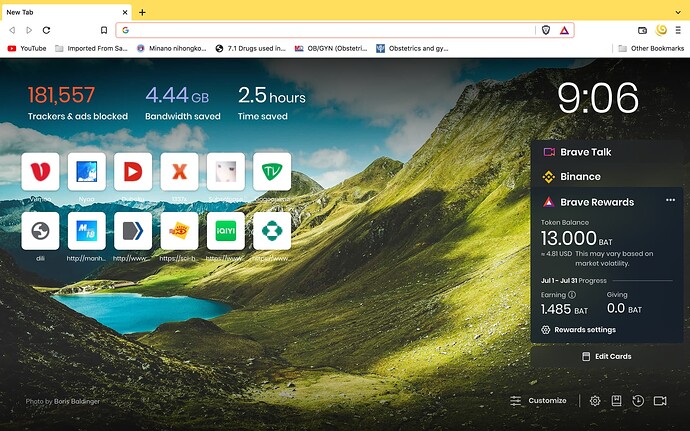 I have exactly the same problem.

Posted on the forum:
Due to the imposition of sanctions against Russia, Uphold canceled my verification and deleted my account

15 days ago I sent a form to unbind my Uphold wallet from the Brave browser.
Sent all necessary data and logs to moderators in DM.
So far I haven’t had an answer.

Since May, the application button has not appeared for me either, and all awards eventually disappear. This happens both in the browser on Windows 10 and on the Android tablet.

I noticed that since July 7, all ads have disappeared and views of sponsored images do not count.

I’m from Russia. Can anyone help us?!

My case was a bit different than your. I do live in a supported area ( Not Russia) . I Did contacted the supported and they replied that I should receive the bat for next month, I’ve been patiently waited for June and July payout. but the claim button still doesn’t show up.

I did see add normal. the bat counted normally but after the “Reward are on the way. keep an eye out!” notice has disappeared My balance still the same.

I have the same problem since March, after my uphold wallet was disconnected from support (I live in Ukraine) and I have been communicating with Brave support all this time, but the problem has not disappeared.

Bro are you being sarcastic or something? I couldn’t tell.

i just shared my problem bro✌

You do get what I mean right?

I also wrote to Brave support yesterday, filling out the form, where I reported that the claim button had not appeared for several months on Windows 10 and Android.

And since July 7, I have completely lost all advertising and viewing sponsored images does not count.

E (Brave Software) Jul 14, 2022, 8:47 AM PDT hello, Thank you for reaching out to Brave Support. This should now be resolved. You will now be able to view ads and earn normally as well as verify your wallet. Please note it may take up to an hour to process. Any missed payments will roll over into the next payment period. thank you.

So far, the only thing that has changed is that views of sponsored images are now counted.
Let’s see what will happen next

Re what Brave Support replied - EXCERPT:

You will now be able to view ads and earn normally as well as verify your wallet.

Seems to me, that a lot of people at this forum, the Brave Community, are going to be surprised, if you manage to:

verify your wallet as a resident of Russia

In consultation with the team at Uphold, verifying Brave Rewards with an Uphold account will now only be available in the following countries of registration, effective immediately (starting July 12, 2022):

Hello @289wk!
The fact of the matter is that while I had a verified Uphold account, I had no problems with advertising and payments in the Brave browser.

But as soon as, in February, Uphold unilaterally removed my verification, and in May deleted my account, I immediately started having problems in Brave browsers, both on Windows 10 and on Android.

On the Android tablet, the claim button has not appeared since March, and on Windows 10 since May.

On the contrary, I wanted to unbind the Uphold wallet from the Brave browser by filling out the form: https://support.brave.com/hc/en-us/requests/new?ticket_form_id=1900000382047
so as not to occupy the slot. But I don’t know if he got rid of it or not, since I didn’t receive any notification by mail.

Uphold no longer provides its financial services in Russia. Currently, Gemini also does not work in Russia.

It remains only to wait for Brave to possibly withdraw BAT to the Binance exchange, or to some other wallet loyal to Russia.

For now, I just want to accumulate BAT in the Brave browser in the Brave Rewards wallet. But there are problems with this, as the claim button has not appeared for several months.

I want to note that after contacting Brave support yesterday, at least today I got promotional notifications and viewing sponsored images began to be counted, both on Windows 10 and on Android.

Let’s see if the claim button will appear in August (for July).

at least today I got promotional notifications and viewing sponsored images began to be counted, both on Windows 10 and on Android

Sounds like Brave Support managed to unbind/unlink as you needed.

So, you may subsequently begin to see vBAT accumulate in your now un-verified Brave Rewards wallet (lower case lettering for ‘wallet’).

Remember to routinely back up your BraveSoftware folder in the following path:

In other words, be prepared - treat both:

as items that you need to keep safe. Because, they can be LOST during:

I did receive ad count as in the pictures that I’ve had attached, but during the payout period in these few months the claim button doesn’t show up. and the amount of accumulated BAT just vanished ad started to count for the next month payout.

I thought they had fixed the issue since their last reply that everything has fixed and i’m gonna receive the payment as normal. but since may the issue still hasn’t fixed @steeven

Remember to routinely back up your BraveSoftware folder in the following path:

Thank you so much for reminding me to back up! I totally got it out of my head

Tell me, please (since I was never interested in this question at all): I need to backup the entire directory of the %LOCALAPPDATA%\BraveSoftware\Brave-Browser\User Data\Default\ folder, or only its segments, for example, only the “BraveSoftware” folder with all its content.
If it doesn’t bother you, please tell me how to properly save Brave browser data, namely the earned BAT tokens when resetting the system (if necessary).

I think this problem is systemic. Because you are in a supported region and I am not. But the essence of the problem is identical! There is no claim button, like you and me!

Let’s keep in touch until we solve this problem!

You are lucky with me), I am a very determined person and will write (if necessary) until a decision is made!

Let’s support this topic until you and I have a BAT application button!

Back up the BraveSoftware folder. That folder is the containing folder - aka parent folder. I wrote out the path:

so that you would see that:

The folder named Default, is the initial user Profile folder created at the time of the initial installation of Brave Browser on your computer.

IF - WHEN you create another user Profile, that additional user Profile will be in folder named Profile 1 at:

I mention that, because you need to know:

Your initial, user Profile, is named ‘Profile 1’ and the substance of ‘Profile 1’ is in the folder named Default.

Your first, additionally-created Profile, will be named ‘Profile 2’ and is in a folder named Profile 1.

YOU have to keep track of the relationship between the user ‘Profile’ names and their corresponding Profile folder-names.

You might change the name of user named ‘Profile 3’ to ‘TEST PROFILE’ - in which case the following will exist, be true:

Some of the backup software, has the ability to schedule backups, and you might want to use that scheduling.

Include date and time in the backup filename. For example:

I strongly recommend that backups be stored on an attached, external hard drive.

OK to also locate backups on your computer - as long as the backups are OUTSIDE of the path of the Brave Browser installation. You might create a new directory on your computer, for such storage (Windows OS example):

Create a new System Restore Point every day or week, depending upon the importance of recent work. 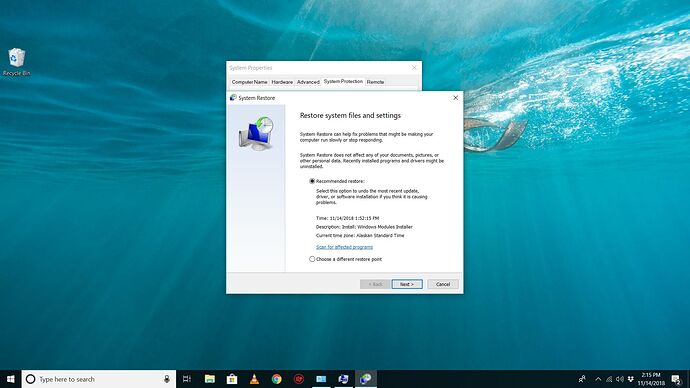 How to Use System Restore in Windows

So, your issue sounds like the Claim button, for the vBAT to flow to your Rewards wallet/account within your Brave Browser installation . . . fails to appear.

If I am mistaken about that, please let me know.

Wallet Payment ID would be required in the ticket form and will be found at: brave://rewards-internals/

(If, somehow, you cannot locate your Wallet Payment ID, then try using your e-mail address in the entry field.)

Please DO NOT reveal your Wallet Payment ID nor other personal info (egs. full name, e-mail address), here, at this very public forum, the Brave Community.

Report your issue details and include:

Brother, yes that was my case. I did screen shot and post my browser picture since the beginning of July and to the day that the claiming process is completed.

I did requested a support ticket as you can see in the picture that I’ve had attached (Maybe you’ve missed) with this post of my own email that the support team replied as It was fixed since May. Obviously they didn’t , so I wait for June and they still didn’t fixed it, Now it’s already July.

I saw many people report similar issue, but I thought maybe the new update’s gonna solve this issue, but still.

Thank you very much for explaining how to create a backup. Since they talk a lot about this, but you won’t find exactly how to do it anywhere)

Made a backup just in case!

I also want to note that regarding the topic of this topic, I wrote messages in DM to the moderators, namely: mattches and steeven.

but received no response.

That’s not you case number that is your wallet ID, Bro.
I also just open a new support ticket. Let see how they’re gonna reply.