What happened to the repo on this page: https://github.com/brave/browser-android-tabs

It had instructions on how to set up a build environment and then yesterday it was gone. Any idea on what happened or when it will be back up?

@trand1,
That’s because we’ve recently shifted our Android code base to use the same as our core browser. You can find Android issues by going to the brave-browser repo and viewing issues under the Android label.

Which wiki article were you looking for specifically?

It was this link that I was trying to access, but it now gives a 404 error 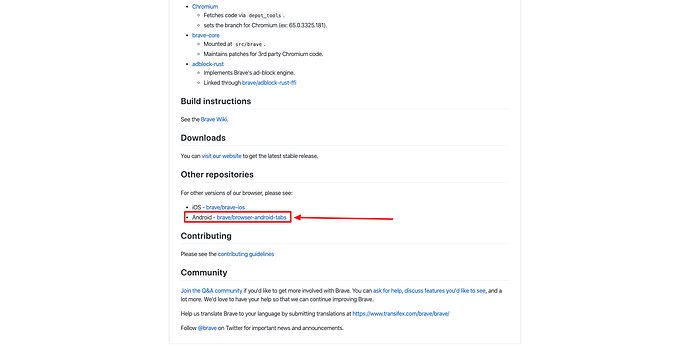 It had some great documentation on how to setup a build enviornment and how to create an APK.

@trand1,
Got it – apologies for the confusion. As I said before, since we’re moving around our documentation and repos due to the migration of Android to core code (mentioned above), some repositories have been made private and will eventually be removed, which is why you’re unable to access the android-tabs repository.

However, I do happen to have access to all the docs in it still – give me a bit of time and I’ll pull the docs from the repository today and post them here on Community and/or on our Help Center so you and other users can still easily access them.

@trand1,
Actually, in the interim, I believe the information you’re looking for can be found on the brave-browser repository now – https://github.com/brave/brave-browser/wiki#clone-and-initialize-the-repo

@Mattches
I’d like to ask you to reconsider this decision of making the android-tabs repository unavailable publicly and completely removing it in the future. There are a few reasons for this:

GitHub lets you archive a repository, which keeps the code, history, documentation (wiki), and community interaction accessible in read-only mode while marking it clearly as unmaintained (here’s an example of an archive repo). This is what I would suggest for the android-tabs repository (and any others you may have retired or will in the future). If you still want to take it down entirely, I’d like to ask you to temporarily restore it so it can be archived for future reference into the Internet Archive’s Wayback Machine. I’m part of the ArchiveTeam and would happily do the actual archival of this.

Edit since apparently closing this discussion is an appropriate thing to do:

This shows pretty clearly what your stance towards the community helping develop your software is. That’s a shame, and I expected better.

@JustAnotherArchivist,
Once again, these issues are not gone – they’ve just moved to the brave-core repository. Some of them have been closed out or marked wont-fix, and will not appear in the new repo – but the rest of them will.

Thank you for your feedback.