Bring back one time script blocking

I used this feature continuously on pages I knew to be loading fedbook and boogle scripts.
Now that ability has been taken away.

I know those pages are still loading their spy scripts but I no longer have the option to not allow them and I can’t even see that they are still there.

Now, I know that the spies didn’t remove their tracking scripts, only that brave has hidden them so that I can’t block them, or see them.

Up until the last update we had the option of reverting shields to version 1.
Why was that removed? Having the ability to decide what scripts were allowed to run was one of the best things I liked about brave.
Now there is no selection option, we have to allow all scripts to run whether needed or not.
Using extensions will work, but then whats the point of brave shields if we still have to use extensions? If no script can do it, why can’t brave?

Obviously our overlords need to look over our shoulders.
Including the ones passing out orders to the devs.

What is the point of using brave if they are gonna degrade service over time?

Now that Shields v2 UI (a.k.a. WebUI Bubble Panel) has been released for some ti…me, we can remove the older version. This will reduce resource usage as there are some background event hooks constantly running as part of the previous version of the UI. ## Test Plan - Shields icon still shows - New shields panel still shows when clicked - Cosmetic filtering context menu items still show up and work - WDP still works

Also, just to give some context to why the per-script controls were removed from Brave in the first place, we decided to remove the feature for three reasons:

However, that being said, we will revisit the feature if we can find an easier way to re-implement given Chromium internals, or if we believe a significant portion of Brave users would use the feature if made available again

<!-- Have you searched for similar issues? Before submitting this issue, please …check the open issues and add a note before logging a new issue. PLEASE USE THE TEMPLATE BELOW TO PROVIDE INFORMATION ABOUT THE ISSUE. INSUFFICIENT INFO WILL GET THE ISSUE CLOSED. IT WILL ONLY BE REOPENED AFTER SUFFICIENT INFO IS PROVIDED--> ## Description Individual script blocking feature gone in new update. This happened before, and I know the answer is in reverting the change in flags, but I can't remember which flag to revert and am not finding it. ## Steps to Reproduce 1. Click red lion 2. advanced controls 3. missing option to block individual scripts 4. 5. ## Actual result: ![image](https://user-images.githubusercontent.com/18445737/183137739-920d2f4b-96ce-4203-85be-58a5128edf5d.png) ## Expected result: Block undesired scripts ## Reproduces how often: ## Brave version (brave://version info) ## Version/Channel Information: - Can you reproduce this issue with the current release? - Can you reproduce this issue with the beta channel? - Can you reproduce this issue with the nightly channel? ## Other Additional Information: - Does the issue resolve itself when disabling Brave Shields? - Does the issue resolve itself when disabling Brave Rewards? - Is the issue reproducible on the latest version of Chrome? ## Miscellaneous Information:

umatrix and noscript are reasonable alternatives

if you don’t feel like installing an extension and know what scripts you want to disable or selectively enable, you can write a custom adblock filter in brave://settings/shields/filters. we can help you with the syntax for that if you want to go this route, but umatrix/noscript are much more usable for most people 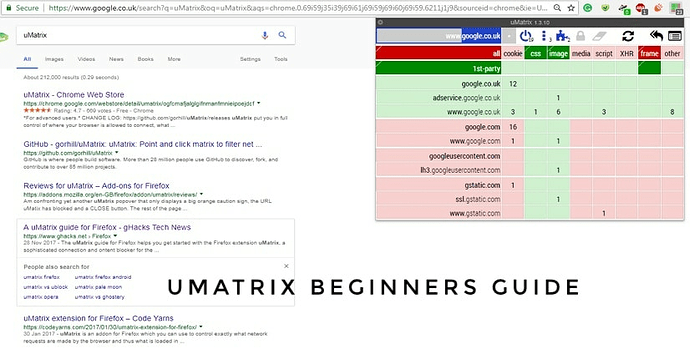 You may want to copy the content of your post linked below, paste the content in this topic, and delete the post below. I did not understand at all what you were referencing in the below post and had to look at your profile and do a search for it to click. It is basically a duplicate topic and should probably just be deleted.

What is it gonna take to get some feedback about this script blocking issue? Desktop Support

It’s been several days. Several users have complained. Can we get an official response from the platform? Or, do we need to move on?

I would also like to mention that Brave support staff usually do not post comments to feedback, feature requests, and discussion type topics. You should tag the moderators and request an official response if you are posting about something other than a request for help in solving a problem. You still may or may not get a response.

Maybe it’s time the Brave for the developers to sit up and listen to what Brave users want and don’t want and actively participate in these forums.

At the very least they could ask Brave users to participate in surveys and give feedback about Braves development.

Firefox tried to be a Chrome clone and continued to make many more very unpopular changes.

The people at Mozilla simply would NOT LISTEN to Firefox users and like the proverbial ostrich burying its head in the sand they continued to ignore all the loud and clear strong protests.

The end result is that Firefox has fallen from grace, at their peak they had 30% of browser users, now they have been dumped by many.

The popularity of Firefox is down to an all time low and they are on their deathbed.

If the Brave developers don’t start pulling their heads out of the sand and start listening to their users, they will eventually suffer the same fate as Firefox.

That would be a terrible thing to have happen to Brave which started out so well, but it seems they have NOT learnt anything at all from the grievous mistakes made by Firefox.

Umatrix does appear to do what individual script blocking was doing.
Better, or worse, I don’t know.
Having to reset every webpage I surf is a pain, but generally a one time thing.

Ignoring customer feedback is not an optimal plan, imo.

Not that I know of… maybe Brave Announcements page? Blog (Brave’s Latest News) page? Brave Insights page? But those are for broad issues overall and are not interactive.

Brave makes announcements everywhere, mostly on social media type outlets, which I don’t use. It would take you all day to track what is being posted at any given time in even a few places, then evaluate it’s usefulness. After all that, you still might miss something. It is impossible to do this for all the possible sources of information: Twitter, Facebook, Youtube, Discord, Reddit, Community Calls, News, Announcements, etc. Too much and no centralization.

I do not know how Brave could better organize information dissemination. They post bits and pieces of information in a multitude of places but users still only get pieces here and there and not the whole picture. It is frustrating to me.

I still think GitHub is probably the best place to track specific development issues. You could track a specific project’s dashboard or a specific issue tag which would narrow down the focus. For example, this is a link to the Brave-Browser/Shields dashboard: 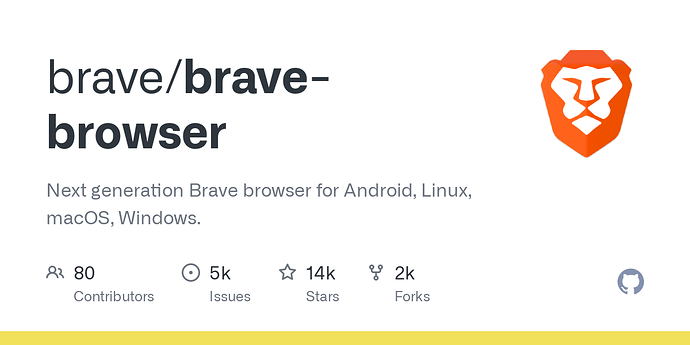 The problem is that GitHub content is definitely geared towards development and developers and not the end-user. It is also not conducive to discussion and feedback on a particular issue. Also, Brave-Browser is only one repository. There are other repositories that may relate to an issue that have their own projects and issues. It is a confusing mess to the end-user.

It would be nice to have an interactive mind map or a process flowchart or something connecting all the projects with subsets and crosslinks to related (significant) issues. You could drill down for more detail and then be able to have discussion and feedback options with a Brave employee responding with the official response. Would be awesome. Would be time consuming and labor intensive to build and maintain. Ain’t gonna happen. lol

Umatrix does appear to do what individual script blocking was doing.

Ooooh. Just thought of something. Just skimming the “How to” for uMatrix above, it looks like uMatrix actually creates a custom filter script that I could theoretically copy and paste into Create Custom filters in brave://settings/shields/filters. Is that possible?

I am asking because I created a topic about creating a custom filter. I don’t use add-on extensions. Ever. But I might have to if this will get me what I want. I can always remove the extension after I get what I need. I guess all rules really are meant to be broken. lol Any advice?

According to this article uMatrix is NO longer being actively developed and this extension is dead: https://www.ghacks.net/2020/09/20/umatrix-development-has-ended/

you can create custom filter rules

Thanks for the information.

I am going to recap my understanding. I can install uBlock Origin extension and use inbuilt features to create a custom filter. I can copy/paste the filter created in UBO into Create Custom filter in brave://settings/shields/filters. I can then uninstall the extension.

Is my understanding correct? Let me know if I misunderstood! Thanks.

uMatrix is NO longer being actively developed

Bummer. Why in the heck would someone reference as “reasonable alternatives” something that is no longer being developed!? Sheesh.

According to the article linked, “Whoever is free to fork under a new name”. Could start a feature request for Brave or Fanboy or some third party involved in Brave development to take it over! A built-in tool to make script writing for the Create Custom filter option in brave://settings/shields/filters would be an awesome feature! lol

Of course, if there is only a “small number of Brave users who used the per-script controls” as pes10k says in the above quote from the GitHub issue, probably won’t be any interest in using resources (limited) to develop and maintain this type thing. Nice idea though.

Are you going to check out the other one, noscript? I’m going to ride on your coattails if you don’t mind. I’m wondering now if it is still active. Could be Brave was looking into, even if only casually, projects that might could be used to develop this feature. Interesting thought but who knows.

Edit: Looking at NoScript documentation now. Thought I would post a link. Hope this is the right site! lol 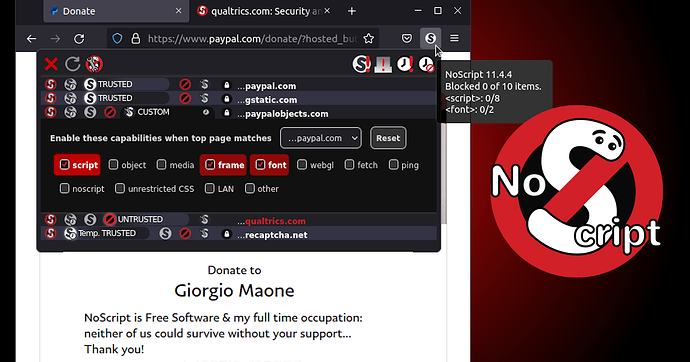 What is it? - NoScript: Own Your Browser!

NoScipt documentation is very basic and I don’t see where they actually display the script created. Myabe (probably) not useful for what I am considering.

I went and looked at uBlock Origin. I skimmed the documentation and it does look like I could use it to create a script to paste into Brave. I think I will dig a little more into using this. Just skimming the content, I like the documentation for uBlock Origin better than AdBlock Plus which I was initially asking about in my topic I linked above.

I’ll probably look into both but for now I’ll start with uBlock Origin. Just choosing the one that gave me the better vibe for now. lol 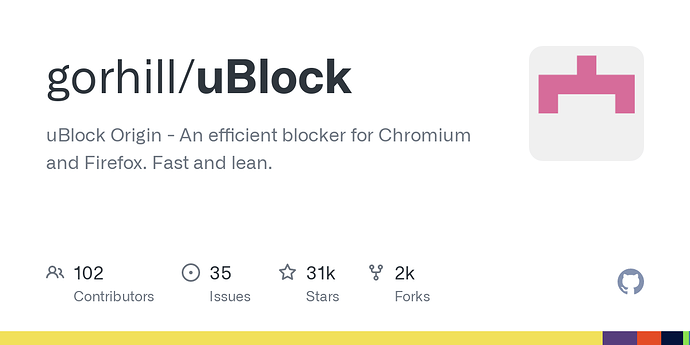 If umatrix is not being developed, that is just great.
It isn’t doing what I need it to do, anyway.

If you look in that screencap you see 16 scrips that I have to allow, or bitchute won’t load.
I can’t see what those scripts are.
On another page, I have to allow 66 scripts when shields was allowing me to load the page only allowing 2 of them.
This is crap.

I guess now I have to give ublock origin a look.
Umatrix is a bust.

Ublock looks even less useful, for me, than umatrix.
As a non-technical user I just want my brave shields back, please.