From clicking on the Icon to fully opening a window Brave took 210 seconds to open this site after opening a new tab, getting a window is unresponsive message, and finally opening my site Logon. ??? going on

I would like to know more about this performance problem.

Do you have a relative speed measurement from a service like fast.com ?
Which version of Brave were you using? The information is available at brave://settings/help

Check the task manager, see if nothing is taking a large percentage of CPU/GPU or Disk. If another application is taking too much resources it’ll lag most things, including a browser . 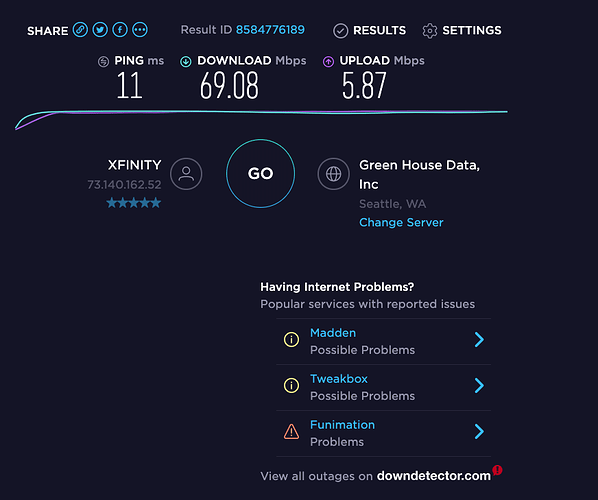 Have tried that already. Nothing extreme found.

Hi, @Fistfullofknuckles. That is a long time to wait on any site, and must be particularly irritating if you’re trying to get to this site for help. However, I don’t think it’s Brave per se. I just opened Brave 0.68.132 in the same version of macOS (MacBook Air 2015), entered URL for community.brave.com, got there and fully loaded in reasonable amount of time, this while having Brave Nightly, Mail, Messages, App Store, Calendar, and some menu bar apps running. I can try this again on my Mini when I get home, though I’ve not fired it up in months and it may not be new enough to run Mojave.

Some ideas about non-Brave possible contributors to slow-down:

When I first read @fanboynz’s post, I thought he mistook your OS for Windows, then I thought he meant Brave’s task manager, but that only monitors Brave’s various processes, so, in case you don’t know:

Sorry, I assumed he was on Windows. my err.

Thankx for replying. The only xtension that runs when the browser is open is Blocksite. Been a user since 1985. Pretty well versed in all of the BS. Brave always runs alone. It has become slower over a span of a few months. Hard drive is split into two partitions. One an encrypted APFS container with 125 gigs of space, 65 which are free space. The other is an SATA encrypted partition with 52 or so Gigs of free space. And the rest (325 gigs) containing music, recipes, iPhoto, and misc. storage files. Memory is maxed out at 4 gigs for a mini which drives an adapter for a 24inch Cinema screen. So I don’t see what could be slowing this thing down. Thankx for reading this. Randy

One more thing. It is faster after it loads for the first time in the morning.

I bow to you as a respected power user of your Mac.

; you clearly know what you’re doing. Sadly, I have not had an opportunity to play on my Mini tonight.

The cache idea @Mattches suggests appeals, particularly since you point out that Brave is faster after the initial load. Still, with the space you have the cache would have to include a LOT of files to really slow you down (as I understand cache usage).

An idea that I hestitate to offer is that your hard drive might be … aging. I’ve had several hard drive failures preceded by slowdowns in operation (increased seek fails?). Is it ONLY Brave that’s having slowdowns? In other words, maybe try Chrome, Safari, and/orFirefox and see if they get the same slowdown after filling the cache?

If you restarted the mac, and only just tested Brave in private mode after (no other apps starting). Just to ensure out anything taking resources.

Yes…The cache is dumped using the CLR DATA command before checking email and then checked for cookies and other flotsam before going to my bank. History is disabled as well as tracking. My HD IS getting old, and I am thinking about a new i7. It’s 5 years old and thats about 25 years in computer age. Age is the only reason that I can come up with anyway. If I find some miraculous cure, I will certainly post about it here. Thankx to all Randy

I’m still curious as to whether or not Brave is the only application running slowly or if others are exhibiting similar behaviors.

All other Apps seem to run fine, but as explained in my previous post, Brave is usually running alone.

@Fistfullofknuckles,
Which partition is Brave installed on?

Brave is installed on the partition named “System” and is in the system directory. BUT i think that I stumbled unto the problem. Some of my Prefs were changed to allow storage of cache, but these two sites are legit…Wunderground…and the local News channel. Of course something could be hiding in there. This morning I could hardly get on the net with Brave or Firefox, so I think that it is time to change my router. But I cannot understand how my cache and cookie configuration got changed.

Also, one of the prefs to dump all info when closing Brave got DE-selected.

Also, one of the prefs to dump all info when closing Brave got DE-selected.

You mean in the Clear browsing data menu? 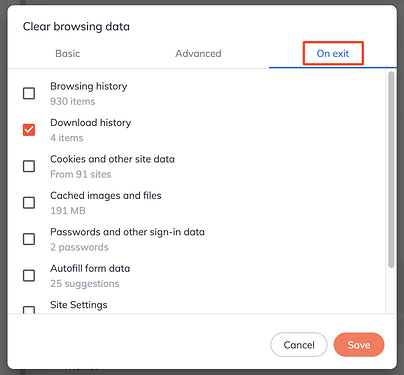 Yes exactly. The first 4 items should be checked as well as the last item about the apps. Also this switch “clear cookies and site data when you quit Brave” keeps getting turned off.

Something else that I notice is that there are little garbage cans on a couple of site names that have been moved from “Block” to “Allow”. I am running Sophos Home Premium AV.