Within the next two weeks, Brave Sync v2 will release in our Nightly version, replacing Sync v1. Brave Sync v1 will no longer be supported. Sync v2 fixes several underlying issues in the code, and adds additional data types to be synced across devices. Sync v2 also provides an improved User Interface.

Sync v2 will first be available on Android and Desktop, with iOS to follow soon after. Users will be notified of the change based on the Brave channel and version installed. When this will impact General Release will be covered in an announcement to follow.

How do I check which version or channel of Brave I’m using?

There are four different Brave release channels, each with their own version number and corresponding icon. You can learn more about the differences between these channels on our Help Center.

To check which channel and version you’re using, open the Main menu and select About Brave. For example, if you were using the Nightly build of Brave, your About Brave page would look something like this: 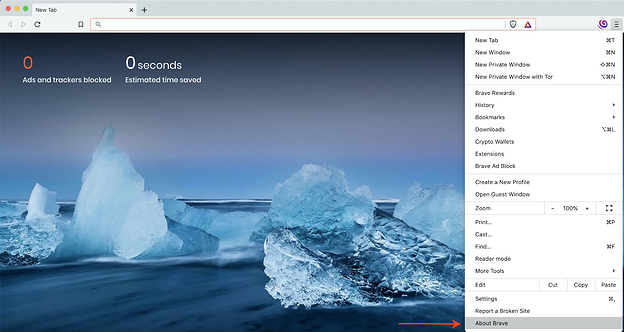 If you are a user on Nightly, Developer, or Beta versions who has manually re-enabled Brave Sync (v1) via brave://flags:

16 Likes
Sync option simply missing
No sync on desktop
How con I Sync my phone with my PC?
Unable to sync my desktop browser
No sync option in settings on windows
iPad Sync does not appear in settings
Sync disallows and reverts bookmark changes
Status on bookmark sync?
Sync not visible in Setttings Menu
Why two different versions of Brave?
Brave Crashes on Windows 10 on Surface PC
Question about synchronization
No sync option on brave browser
Does sync work for desktop/laptop yet?
Cannot sync Mac and iOS devices
Can't "remove this device" to start new chain
Can't import bookmarks from Chrome to Android using Sync
Sync code doesnt work
Brave crashes consistently shortly after opening
Linux Desktop: how may i export settings and bookmarks or make a complete profile to export?
Sync is missing from settings IPhone Pro Max
I can't find Brave -> Sync on my Mac's browser
Brave not syncing from android to desktop, have enabled brave sync in brave://flags
Bookmark Sync release date?
Sync Problem (Version 1.9.76 (64-bit))
How to sync from my desktop
When we are going to get updates for moving from mobile to desktop or desktop to mobile?
No option to sync to other computers
How to sync brave between old pc and new mac?
BRAVE on mobile nonsense
Sync or the lack thereof
Brave crashes after using Sync
Switched from Win10 to Fedora, haven't enabled Sync. Is there hope to recover BAT and Bookmarks?
Trouble with sync for 1 week
Unable to sync between my mobile phones
iPad does not sync but other device will (however only with nightly)
Mattches pinned globally May 28, 2020, 10:49pm #2
Ensaladilla May 28, 2020, 11:15pm #3

It was time! Good job guys!

This functionality was already highly demanded in the forums and the community. You would need to integrate into the menu the power to choose the dark mode on the web to be able to activate the color inversion without having to access it from the flags.

Finally! Can’t wait to see it on regular Brave release. I hope that’ll be a simple login\pass kind of sync.

I am not a fan of any sync feature anywhere. I tried v1’s sync and yes, it was that bad. With v2 and extension support for Android coming, I hope that this will sync extensions too. And with that I bet this will make more users from FF and GC switch to Brave full time.

this is a hotly discussed and eagerly anticipated update…but can I make a suggestion if it’s not too late?
Please include stats when syncing between instances of brave. any and all use of brave should be reflected in the stats…with the added metric of length of use please (perspective being everything)
this goes parallel with all of the BAT stuff people talk about

Good. Any day now then? End of this week? Because it’s been 25 days folks…

Pushing out a product before its ready generally does not go well – especially with something as complex and intricate as Sync. It is not an easy task and we are working very hard to ensure that Sync v2 works properly. We appreciate your patience and will have more information available as soon as possible.
Thank you.

Don’t know where we could “vote” for such feature, but I would support it (and promote it!!)

You guys need to do way better with communication. In iOS it just says how to sync up with the desktop. I couldn’t find the option anywhere on desktop. Then I found out it was only in the Nightly version. Then found out the Nightly version also has it disabled. You need to just make it clear this feature isn’t available. I spend like 30min trying to figure this out. I was really excited to try the browser it looks great on iOS, but is not useable without syncing. It’s fine if a feature isn’t ready, but don’t make users search through forum posts to figure it out.

@rsmith4321,
We had this pinned announcement here on Community for over a week.

We also announced on Reddit (still pinned at the top of the page): 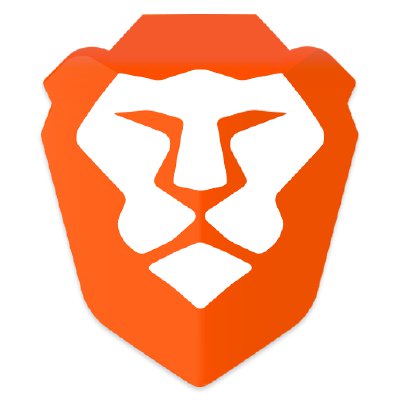 It’s also the first thing you see when you land on our Sync documentation on our Help Center: 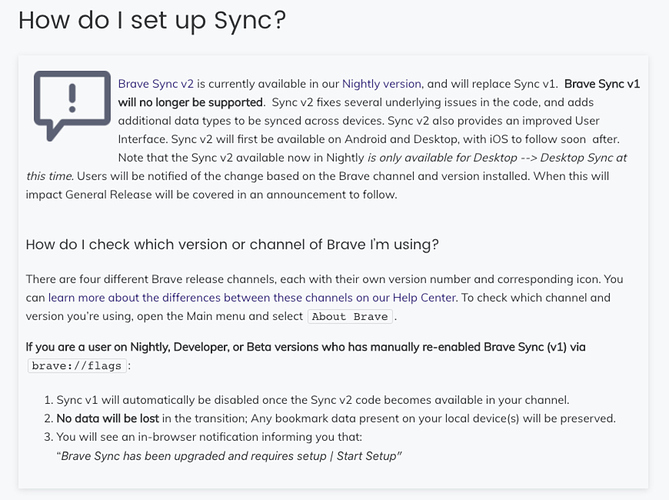 Actually, read that from the view of a new user who has no idea what sync v1 or sync v2 is. I finally figured out you can go into the brave://flags and turn on sync v1, and I figured out sync v2 does not support mobile yet. When the iOS app has clear instructions of how to turn on sync, then you go into the desktop app and there is no option for syncing that is a very poor user experience. I’m not saying it’s impossible to figure out, I’m saying it’s a terrible user experience. I shouldn’t have to search through help docs or forums, the iOS app should clearly say this feature is not working at the moment. I can’t believe you think that reddit posts and help docs should be necessary to understand a feature doesn’t work that is clearly said to be working in the app.

I personally find this talk about Sync 2 confusing. Some people are saying it’s available, some not until the end of July.

I am super duper excited this sync v2.

@rsmith4321,
Sorry that you had a rough experience. We will try and do better with our messaging as we are always trying to improve ourselves.

@profQuatermass,
Sync v2 is available in Nightly builds of the browser right now. It will slowly move down the pipeline from Nightly --> Dev --> Beta --> Stable where it will then be available for everyone.

That’s why this is so confusing, you say it’s available. So I try the Nightly build and it won’t sync with mobile. Mobile sync is the only thing people really care about.

@rsmith4321,
Duly noted. Thank you for your feedback.