Brave sync on iOS is completely broken and has been for many months! - plus other bugs with sync on iOS too. (iOS) If you have iOS please read!

Thanks for your reply! Very informative! I will test the password function as soon as I am back in front of my computer! 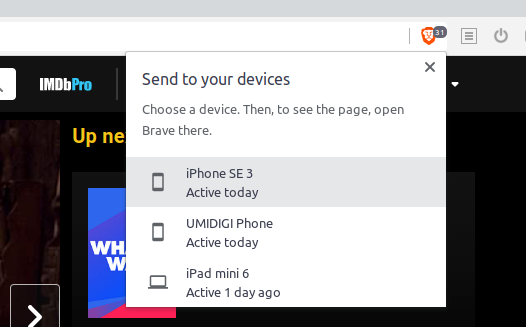 Perhaps, but it’s not there yet. No options in Sync for it. I know my device shows the same thing as you’re showing, but when you click to send, nothing happens. I’m guessing it’s just there from where it’s programmed for other devices.

I do know if you go to send from Desktop to Android, it doesn’t necessarily work either. Though Android does have a Recent Tabs part in Settings that allows you to see from it what’s on your Desktop. But I don’t see an option on Desktop to see Recent Tabs from other devices. You can see an option under History that shows Tabs from other Devices but it’s broken, nothing showing up there when I check.

True, from Android I can say Send to device and then a little popup thing will appear with the option to Open Tab but that’s not the same as syncing tabs like I mentioned able to do from Android, where the Android is able to see ALL open tabs on my desktop without having to Send to Device first.

at least iOS devices are now showing up; didn’t used to

send to device works great for me to android

on desktop its on the history page (brave://history/syncedTabs) or in the menu: history > recently closed then at the bottom it shows whats on other devices (iOS not included)

on desktop its on the history page (brave://history/syncedTabs) or in the menu: history > recently closed then at the bottom it shows whats on other devices (iOS not included)

Issue is, doesn’t work that way for me. Same for others I’ve heard. The Tabs From Other Devices stays empty, with nothing ever appearing there. 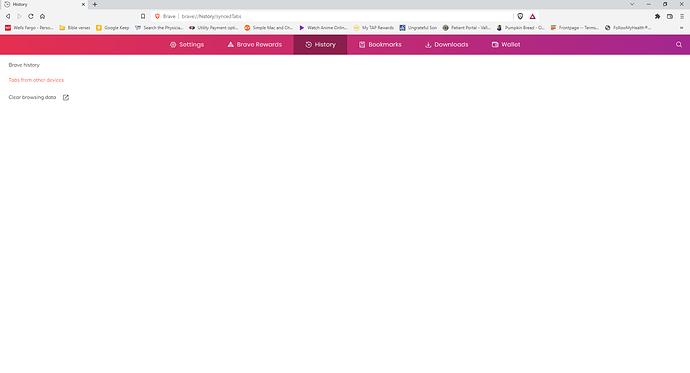 When you took that screengrab you had a website open on your other device I take it, mine takes a couple of minutes to show up normally

Nope, it just stays that way always. It doesn’t matter if actively using the mobile device or not, if pages are currently open or closed, etc. It just stays blank

Do webpages from mobile show up in your desktop history list page?

Do passwords sync as well from android? I ask because by default brave on android only syncs bookmarks and you have to enable then in the sync options

Do webpages from mobile show up in your desktop history list page?

Not always. I’ve already relayed some of this info and concerns to devs from Brave.

Do passwords sync as well from android?
Yes

I appreciate you asking a lot of questions and trying to help. Unfortunately it’s just not working. I’d rather not keep going through a whole laundry list of things unless/until developers working on it are checking on things. Especially since I’ve been through a lot of this before.

No worries, I guess you’ve moved to another browser which works better for you until your problems get fixed.

guess you’ve moved to another browser which works better for you until your problems get fixed.

Nope. Still using Brave, just without those features. I know they’ll eventually get it all resolved. I don’t really concern myself about things too much but i do send messages to a variety of people at Brave and then hold on to get resolved.

In terms of issues with sync, I know they’d likely need to get my sync internals and maybe test things here and there. It’s been frustrating though as I’ve tested, such as typing full URL and they only occasionally show up on other devices. It’s like a coin toss at best whether it’ll show. And tabs just never have shown from mobile device to desktop, but works desktop to android. So a lot of one way traffic and all.

Just FWIW I have the same issues as @Saoiray. I have no tabs or history from other devices in any of my Brave instances. I really need this feature and have been holding out waiting for password sync but from what @Saoiray says he has made the devs aware of the issues and there isn’t really a timeline to implement those things fully (a history of what I have keyed in is almost worse than no history because it is misleading, esp when Chrome handles it the “correct” way) so I am sadly switching back to Chrome. Maybe one day it will be ironed out. Thanks!

That’s in place. All devices should have it and it’s working. They had just added it to iPhone a couple versions ago. I forget which one, but it’s been “fairly recent” overall. It just is turned off by default and we have to go to settings and turn it on, also making sure it’s set up to see and sync passwords in the Sync menu.

have no tabs or history

History definitely is glitchy. Just to make sure it’s understood though, the way it’s programmed to work is that ONLY typed URL is saved. So if you click on links, did web searches, or any of that…it won’t sync in history. You have to literally type the exact URL or it won’t show in History for synced devices. I say it’s glitched though, because even when I type URL it doesn’t always show on other devices.

I just moved to an iphone se from an 8. I am unable to sync my iphone and mac as the iphone has no option to scan or enter the sync code. I may be missing the fix but so far I have not found it.