Brave sync on iOS is completely broken and has been for many months! - plus other bugs with sync on iOS too. (iOS) If you have iOS please read!

It appears like they have a lot of other bigger issues to worry about right now, such as why there’s so many issues getting payments out to Gemini and Uphold. But what is confusing is like where I was causing I have an issues with you guys on getting my sync chain dropped. Ever since I’ve updated to 15. Three on my iPhone it no longer has dropped. However, it still is as I said to where things like search history is a one-way street where my computer and see what I’ve access on my iPhone but not the other way around. And it should show both ways. I also do not get why I can’t have the password capabilities with it but it is what it is.

And if they are testing with their own devices and not experiencing issues that you are, the night would leave a person stumped. Why is it that only one device or a handful of devices are having issues while others on the same operating system and all are staying connected?

still happening to me this is so annoying

Same; everything @ukheather describes is still happening here, as well. Which makes sense as they haven’t implemented a fix and may not have identified the issue yet. I have gone as long as a week without issue, more than once, but eventually my iOS devices will simply stop syncing with the chain.

This was resolved by using a sync code generated on my pre M1 chip iMac instead of my iPhone.

It may be, that a device must be set up as a hub, creating and dispensing the Sync Code for all others. 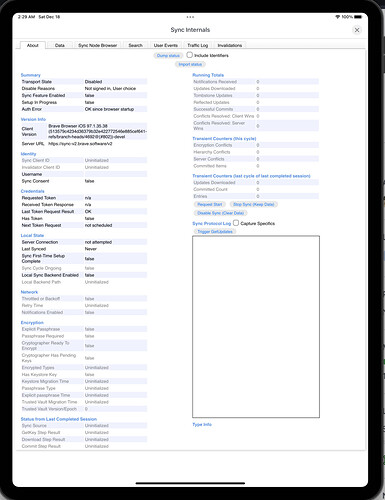 I’ve started sync chains from every device I own, including my pre-M1 iMac. They all fail. After a day, or maybe a week, they all fail.

Thanks for letting me know.

After version 1.35.1 sync seems to be holding longer…

It still fails though.

As I said I haven’t had any confirmation they are even working on it yet as they couldn’t figure it out.

They told me they will let me know when they have more info meaning this isn’t being worked on yet as they don’t know the cause.

They can replicate it on some devices, but not all.

This is still unfixed so if you download the update, you won’t get a fix.

Very true, although it’s still holding for me

@UltraViolet Yeah, held for my 18 days or w/e when I updated. I did just intentionally disconnect all my devices last night as part of a troubleshooting process with someone else, just testing things on my end.

The Sync menu is showing like it’s all connected but if I go into History, it’s no longer having communication between devices. But Bookmarks still is synced. And because they don’t have Password thing doesn’t exist for iOS, obviously that isn’t a thing.

I’d just like to know why @sampson vanished with no updated. Brendan Eich was saying a bit ago he and his family was sick, but he also said was back in the office and just tagging him should be a good reminder and he’d get back to us. shrug

Unless they just are saying only having someone talking to ukheather and not wanting to update themselves here anymore.

We’re still waiting on a fix I gather… I’ve been “living” with this sync issue for over a year, recreating sync chains on all devices every quarter or so, then running a duplicates remover. If the browser weren’t so excellent at removing ads everywhere (including youtube!) I would’ve switched back to Firefox a long time ago, because FF’s sync works flawlessly. Anything other than being patient and commenting we can do?

Anything other than being patient and commenting we can do?

We could try writing a review on the iOS App Store about the broken status of Sync, but I doubt anyone reads them.

@Mindfuse TL:DR = They are working on it. We are waiting for next update or so where they will let us submit logs to help determine issue.

I just reached out to iOS developer over the weekend and he advised that they are working on things. At this point, most everyone should be stabilized. People I’ve spoken with have said since they updated to the newest Brave version and the newest iOS, they aren’t losing Sync chain.

When I talked to them about lack of communication in Sync, such as browser history, he advised that only typed addresses work. However, I tested that with various sites and it didn’t sync. They said we’re stuck waiting until the next version update, at which time we should be able to provide logs to them that they can analyze and better determine what’s going wrong.

Does that mean – because of how the History function / process works – that a URL address, that is the result of an AutoFill, does not work?

Is browser History, more than the storage of visited URL addresses?

All I can relate is what they mentioned

For the history sync only one kind of history is synced which is typed history, so only urls that you enter manually in your address bar.
I think this is how chrome on iOS behaves too

Additionally in next build we add a helpful debugging menu for sync which should help us investigate issues better, it’s equivalent on desktop is this site brave://sync-internals

I chased up the 2 devs I am in contact with last week.
One didn’t reply, but one has and said they are working on it now so that is something at least.
Hopefully we are close to the end!

This has been going on way too long now with not enough updates for this HUGE bug.

Thanks for following up on this so regularly!