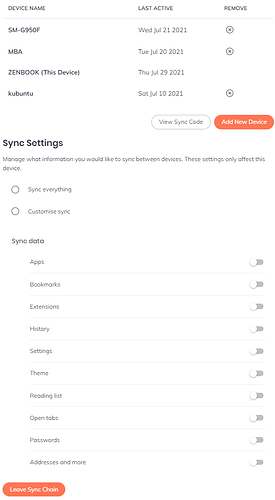 What does it show when you click Sync Everything?

it doesn’t keep any option, when I leave the sync setting tab and come back I have to select it again

I’m having the same problem. Fedora Linux 64 bit. Brave not saving any changes, cannot change sync settings nor can I quit the chain or remove devices from the chain.

Personally I simply, left the Sync when it was possible and on the devices were it was’nt I reinstall Brave after I flushed everything related to Brave such as ie: [./config/Brave, .local/…]

Even after resetting all my device and restarting synching this issue came back on my Debian
My mac, my Android and my Windows sync but not my Debian

It is exactly the same on my Debian
when I try to sync anything or simply the bookmark
the option don’t stick to my choice.

It is almost a running joke, every 2weeks I have to reset my Brave Sync
Here again this morning, I noticed my bookmark did’nt sync between my phone and my Debian Laptop. nobody have an idea ?

So I got it again; and I was, hum, last week it was working and then this weekend it stop, what change doc ?

Basically; Brave sync everything between my iPad, 2 Android, 2 Ubuntu, 1 MacOS and 1 Windows since for ever and I have no complain until I create a second profile.
At the beginning I declared Debian/Linux probably because it is where I created the second profile (one for personal usage and one for work) but then this weekend I create a second profile on my Windows 10 for the same purpose and over the weekend same a bunch of bookmark via my 2 androids and the iPad.

This morning, Windows did’nt sync those, but all others devices are fine.
So my new conclusion is it happen only on the device with a second profile.

Yep, on my windows I had to rename User Data and restart again my Brave profile

@JOduMonT I feel you man…the same problem every 1-2 weeks… happens regardless OS ( Mac, Win ), and regardless how I connect ( remote host or local machine )

@macfanol thank for sharing, I thought I was alone

do you have multiple profile ?

do you have multiple profile ?

So since my last reset, I only have 1 profile and everything works fine,

again today I realize my Brave Sync is dead;
unable to add or remove devices
this time my Brave only had one profile

where is the Brave team ??
what they think about that…

I think I switch back to firefox.