UPDATE: I NO LONGER CAN PRODUCE THE PROBLEM

My question is in the form of a statement. Please identify the most important mistakes in my statement.

Example: The term “2000 mules” does a great job of excluding links to the most relevant meaning the term. Regardless of anyone’s opinion on the truth or untruth of the film named “2000 Mules,” The most relevant meaning of the term today is it is the name an important and controversial film, which purports to present strong evidence of that illegal ballot harvesting affected more votes than Biden’s margin of victory in five states in the 2020 election for President of the United States. Had this ballot harvesting been detected before results were certified, the ballots submitted illegally would have been removed from the votes that were counted, and that would have made Donald Trump President instead of Joe Biden

Some people, who are ignorant about the importance of free speech, believe it is dangerous to allow expression of ideas contrary to the baseless mantra of TheNarrative™, “most secure election in history”. They call this form of dissent “a danger to our democracy.”

I am guessing that perspective is the reason that searching for “2000 Mules” returns squat regarding the political film named “2000 Mules.” In other words, the people running Brave, or possibly Brave Search’s upstream search results, such as the output from The Trust Project, have the bias against AllThingsTrump™ and the people running Brave mirror The Trust Project.

Regardless of the cause, the result is politically bias and not in a good way.

I don’t see the same thing. In my search for 2000 Mules I was presented with purchase options, IMBD reviews, links to watch the movie, FactCheck and Wikipedia articles, etc. I mean, it was pretty darned neutral and had things from all views. Here’s screenshots of everything I saw… 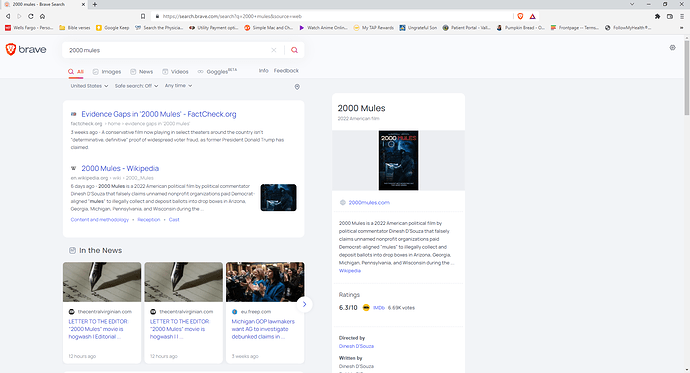 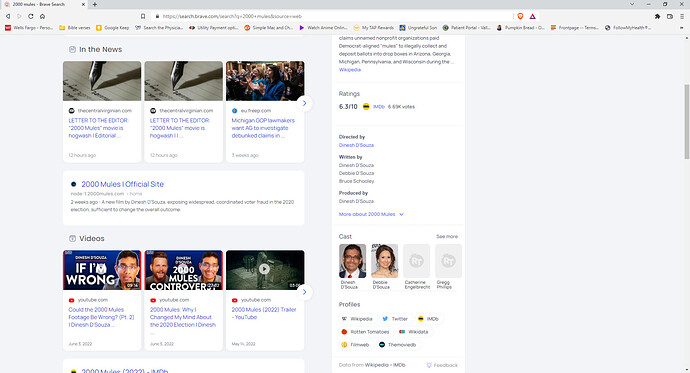 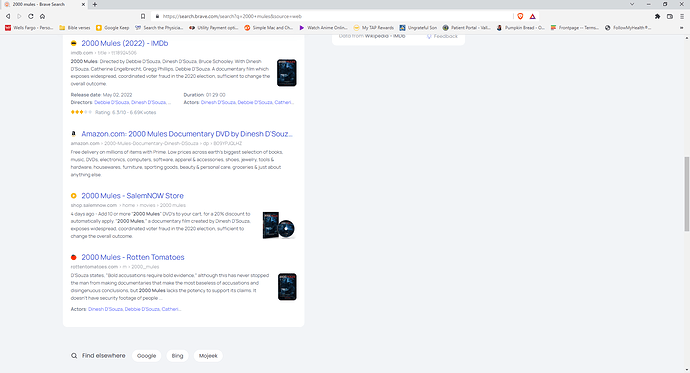 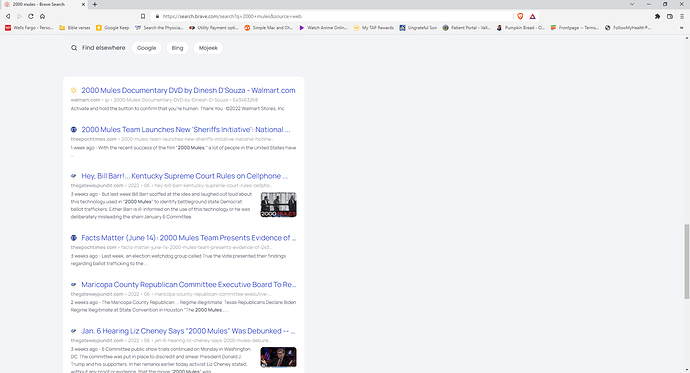 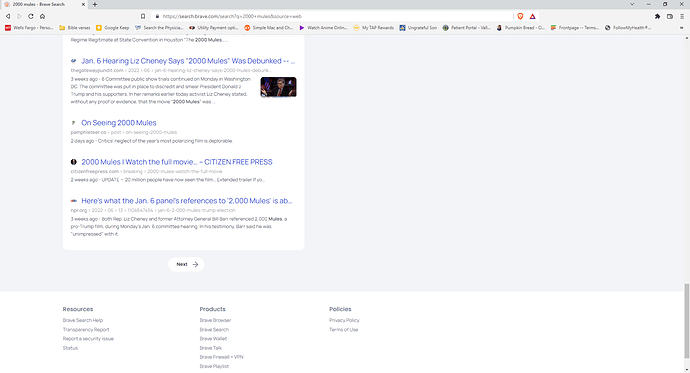 So yeah, I’m not sure what "bias’ you’re claiming. You mainly rambled about 2000 Mules rather than what happened with Brave Search. Were you here just to share your political opinion or what are you saying occurred within results?

Also, have you tried Goggles yet? You’ll notice when you do a Search that there’s a link/tab you can click on that says Goggles. If you hadn’t noticed it, this is a feature added by Brave to allow Users to be able to customize results based on your own preferences.

Once you click on Goggles, you can use currently existing ones or you can even create your own. 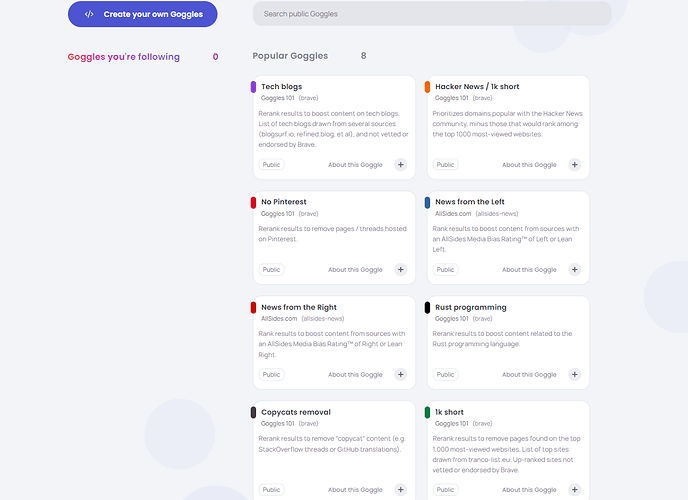 Last, but not least, I’d like to present you with a post from Brave, which may be beneficial to you.

This thread was brought to my attention, and I think it’s worth answering. My name is Josep M. Pujol, I’m responsible for Brave Search. Prior to joining Brave, I spent 6 years building the eventual foundation of Brave Search at Cliqz. Brave Search does not censor. The fact that some expected results aren’t returned is not the result of censorship; it’s the result of search-engine-development being hard, and forever a work in progress. There is some confusion between censorship and bias. Brave …

I don’t know why, but now I get results similar to yours. I cannot explain the difference between what I get now and what I was getting.

I should have posted screen shots of what I searched for and got for results.

Now, I cannot reproduce the problem I reported.

That said, I do not recognize the relevance of Google Search results to this topic.

So yeah, I’m not sure what "bias’ you’re claiming.

Now, I am not getting the same result from Brave Search. It would have been helpful for me to have posted screenshots. My bad.

The bias I was claiming was

All good, I hope my words didn’t come across negative or strong. I always take a lot of time to hear people out and research. Then if I can’t make sense of things, I ask questions and respond to all said.

I do know one of the links I provided was where one of the people in charge of Brave Search tried explaining things a bit. As he said, there’s bias but not a censorship or personal bias. The bias they have is that they are collecting search data based on what people search and navigate to. Brave Search is new and they originated by pulling results from Google and others. Now they are starting to shift to be more Brave only results. Yet it’s still very small and new. So the things we see often may not be accurate and can shift based on what the larger percentage of people are accessing.

They are working on correcting that and making general searches more “neutral” rather than whatever is “popular.” One of the ways they are also letting us sort through things is by giving Goggles, which allows us to set priorities and exclude particular types of content for ourselves. That, too, is a work in progress.

I do not recognize the relevance of Google Search results to this topic.

I didn’t say Google or share Google. I’m guessing you saw Goggles and thought it was Google?

Goggles is something they added to Brave Search. It’s where you say say “I don’t want to see images from Pinterest.” Or you can set it to say “show me results that are politically left leaning.” They are working on letting you create your own, but right now it requires Github and all to do, so it’s not fully accessible. They show 8 filters when you click, but if you go to type things out you can see some others people have created. 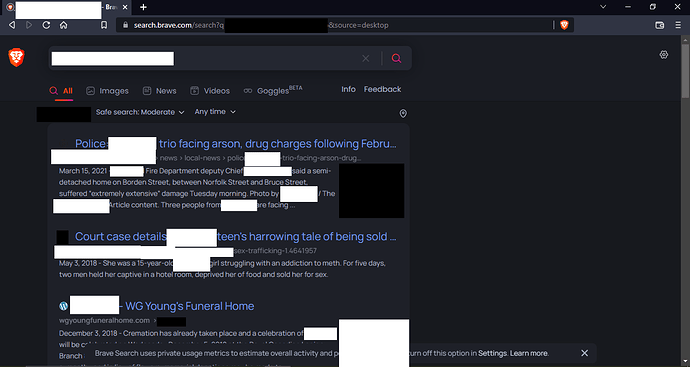 defamation of character1280×682 76.7 KB
There I deleted the previous post because there was still some private info on it but here it is, the post I put here previously was hidden, so here, I put in my name I get these result which are about someone with a different last name lol, so, yeah the search engine needs work, cuz I am not the person in these articles lol.
Saoiray August 7, 2022, 7:17pm #13

I was wondering what happened to it. Guess there was a word or phrase which triggered the…can’t think of the term, but the auto moderator thing used by the site.

Well, guessing you don’t have much news-worthy about you. I mean, unless you’re going to reveal you’re some celebrity or something of the sort.

As to the results, I’d have to know the info and try it myself to see what it comes up with. Sometimes the names or words will be intermingled. Like let’s say we had a name, “Alex Caldworth.” 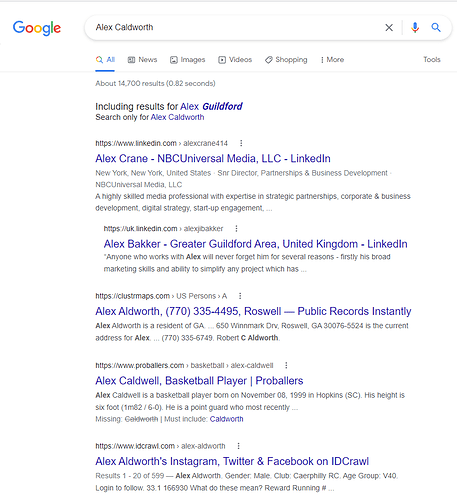 Does that make Google biased? Actually, it made me laugh a bit with Robert C Aldworth. as I guess it kind of fits in, but otherwise different last names and all.

Now let’s do the same search on Brave Search. 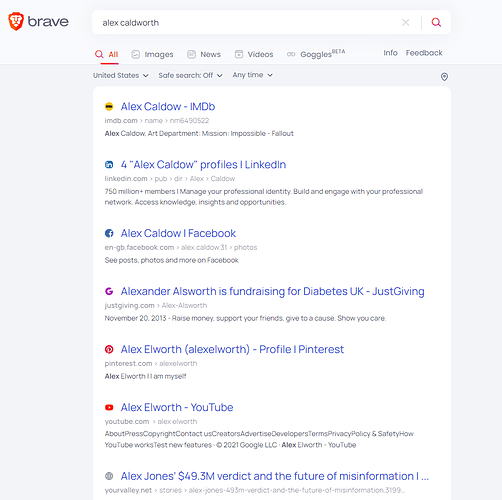 Still bad, in fact much worse than Google’s in terms of showing results relating to my search term, but it’s not like it’s anything negative. It’s just the things it could find most relevant.

What does amaze me though is that both search engines prioritized Alex over Caldworth. Otherwise it perhaps would have shown some of the Caldworth results, such as: 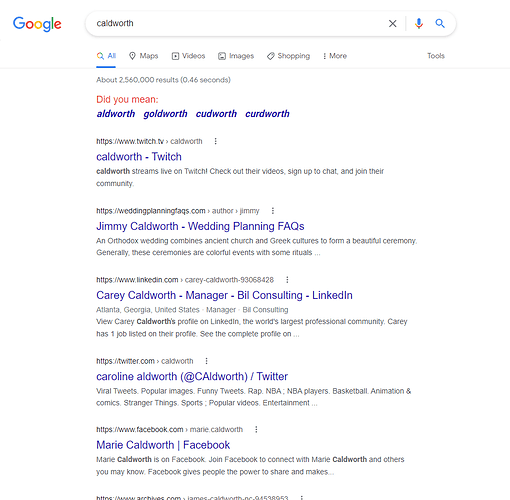 Yeah, I guess the thread isn’t relevant to the topic of “politically bias,” persay. I’ve noticed there is a feedback option on the search engine itself which you can access to rate the search results in regards to the keywords you put in. For a while there, customers didn’t have a way of providing feedback to the dev team of brave without using the community forums, which is why I posted here. You see, the problem was, that if i put in my full name, and the location and which I live, I get bad press from area about a dude who has the same first name as me, but if I just put in the my first name and the location, I don’t get these press statements. If I put in the dude’s first and last name, and the city, talked about in the two top articles, I don’t even get these two articles included in the screenshot. To me, that’s a serious flaw which could be improved, in order to get more accurate results.

All good, I hope my words didn’t come across negative or strong. I always take a lot of time to hear people out and research.

That is very gracious of you to say. I thought your response was 100% appropriate. I feel terrible that I made a claim without showing screenshots or at least having them in case they were needed. Very bone headed of me, and in all honesty, even though I was certain of what I reported, without the proof, I cannot rule out the possibility that I did something contrary to what I reported. Usually, without the proof in hand and visible to others, further review of my work reveals an error on my part.