Brave is clearly censoring search results for PC motives. I get less PC results on google.

Nah, not at all. You clearly haven’t been using Brave Search. Not only is the default Search pulling a large variety of results, they also have Goggles that you can activate which lets you sort results based on the types of things you would like to see.

What they don’t do and have not done is censor any search results.

Ah, I’ll leave this for you too. So you can have an “official” reply or two on your claim.

This thread was brought to my attention, and I think it’s worth answering. My name is Josep M. Pujol, I’m responsible for Brave Search. Prior to joining Brave, I spent 6 years building the eventual foundation of Brave Search at Cliqz. Brave Search does not censor. The fact that some expected results aren’t returned is not the result of censorship; it’s the result of search-engine-development being hard, and forever a work in progress. There is some confusion between censorship and bias. Brave …

Brave doesn’t censor, and Brave doesn’t inject bias into Search results. We go far beyond paying lip-service to this commitment too; we’re developing Goggles to prevent this issue. What’s Happening? The query Peter Santilli returns one set of results, while the query Pete Santilli (note the spelling of the first name) returns another. Mr. Santilli’s podcast uses the “Pete” variant, along with numerous other sites. As such, “Peter” may be expected to yield less-relevant results (without the eng…

“Clearly”? Nice assumption. I’ve been using it for a year.

Nice try though. For example, THIS:

Brave is censoring Leah Thomas pics and putting in others in the results.

So there’s screenshots of some results. Keep in mind Google been around for ages and has more compiled. Brave is new and still in Beta. To top it all off, you didn’t even look at articles but are pulling up images. 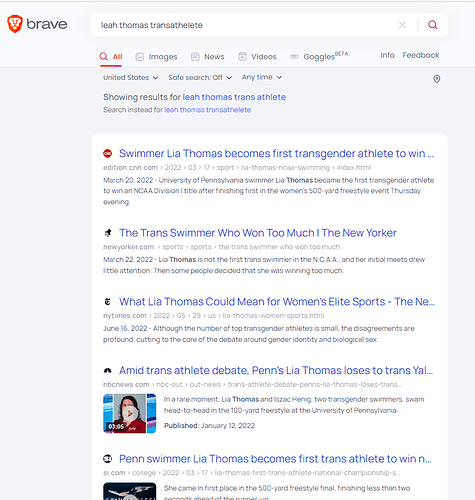 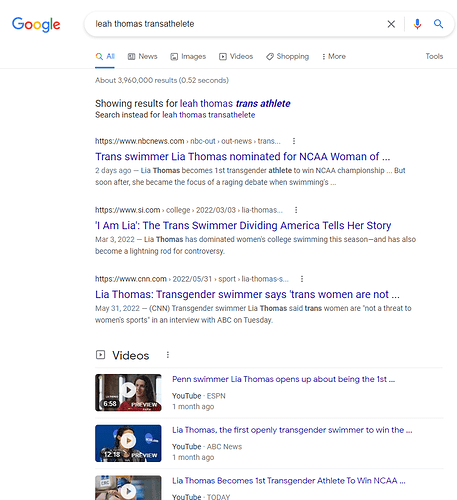 Results don’t seem to be censored or PC there either.

“Clearly”? Nice assumption. I’ve been using it for a year.

Guess you missed the point. In much the same way you claim that “Brave is clearly censoring search results for PC motives.,” is the accusation that you “clearly aren’t using Brave Search.”

Go read the posts I linked to you, especially where the people working on Brave Search explained how resulted are aggregated and all. It might help to educate you a bit more.

Nice try. The pics have nothing to do with the search terms. Therefore, clearly censored.

So if it’s censored, how did those particular pics of other athletes get included in the results? Along with the correct target (so she’s not being suppressed).

Answer: They are all embedded in pages that also have pics of the ccorrect target.

If seen this with other image searches using other search engines with non-controversial targets. To wit, pics of myself in other people’s pages.

Stop being a ninny, OK?

Stop being a shill, ok?

2 alternative results from 2 different search engines, not the same as Censoring. Why the aggression?

Aggressor asks why the aggression.

Irrational people asking why the world is not doing what they say. if they were ‘censoring’ like you said, you would already been banned for how ignorant you are, first, Brave uses Bing images API in the first place, why do you think when you search for images it says something like “Response took 0.00 seconds. Results from third parties” because they wanted to? no, it is because Brave images fetch the images from Bing, which you would have learned if you cared to click the “learn more” instead of coming to the forum to complain about something you don’t even know about.

I mean, go use Bing and do the same search and please delete this thread after that.

But seriously, even if Brave was touching the results like DuckDuckGo has done (modifying their indexer on top of Bing indexer censorship) why would Brave even care at all? only because some dude wants to take advantage of female sports and win easy, and got 5 minutes of fame like million months ago, why would Brave care at all? nobody really gives a crap today and I am sure Brave team has better things to do.
They are not wasting time like you do by complaining about this and crying about it. Maybe you should stop caring because most people don’t care, even the ones who supposedly cared but guess what the guy was literally used as a tool for political movement, and since it was a failure and there were change in rules to stop him from competing in Olympics and all that, then even the same people who supported him ruining women sports just move on to the next opportunity to spread another agendas in USA politics.

I mean, I know the people like you, the ones who probably search for every possible query until you find something to complain about but can’t even read about how images are all third party, which would not be hard to find who exactly is the ‘third party’ since DDG, Ecosia, Qwant and etc etc, all the Bing API search engines have the same issue.

Not just that, that also shows you are even an ignorant on your own crap, I mean, literally Google AND Bing even correct you because Trans and Athlete are two different words, and it seems Bing fails to really care what you tried to say with your whatever brain process. Once you separate the words THEN Bing API will start displaying the images that apparently are so important you are crying about it, I am sure you will complain “not enough” because it is not 100% what you would want, but you can go and complain to Microsoft/Bing anyway, it is not a Brave’s issue, or DDG or Qwant or Ecosia etc etc. Are you telling me Microsoft is censoring yet another agenda they support? Microsoft supports the dumbest crap so it would be weird if they decided to censor anything like that.

Like I said, next time research before making a thread, I mean, it was easy to find out what was going on especially when 85% of search engines use Bing API, so only Startpage and Google would have done what you wanted. Not even Mojeek since it doesn’t even display an image but you can click on BING and then it will use Bing API apparently so it will display the same images Brave, DDG, Qwant, Ecosia, etc etc… but only if you used the proper term “trans athlete” that even Bing and Google suggests.

@russn8r You are totally wrong with your statement, there is no need to accuse censorship especially when you don’t have enough knowledge about how Brave works.

There are Brave team workers and community members on the forum who can help you better understand why you’re unsure about your results. There is no need to fight, just question and be willing to understand.

Who do you think you’re kidding?

Okay all. Sometimes people have to agree to disagree.

@russn8r we’ve heard your opinion and tried to respond with more info. What you choose to do with that is all on you.

As to others, appreciate you trying to help in providing info. At least we had quite a few who views on things.

That said, been a few name-calling parts and conversation isn’t appearing to be productive. So let’s try to drop it and definitely let’s make sure we don’t escalate more than has been done already.

Keep in mind rules here on Brave Community as well.

Works for me. And for the record, I didn’t start the namecalling.
Peace out.