I have a small problem…

My brave browser balance is differ with my uphold balance…

Can anybody help me… 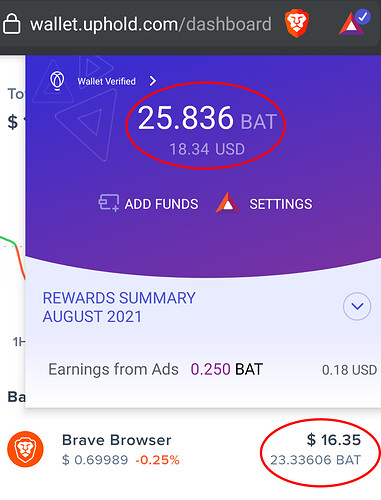 This happens when you have more than 4 devices connected to Uphold.

How many devices do u use?
Even count any of your old devices even if you don’t have them now.

Two computers and a Mobile phone…

I didn’t know that…

Is there a possible way to clear this issue…

Yeah this browser has just gotten worse and worse. I have only 2 devices hooked up and I have the same problem. Both my phone and browser have tons of BAT and I’ve gotten nothing this month even tho it says I got 7.6 It never appeared on my linked uphold account at all. Last month I got .46 BAT even tho the browser says I got 3 BAT. LOL I’m thinking its time to uninstall this POS browser its become a scam.

Not gonna lie, I’m also frustrated by this browser reward system. There are so many issues that should have been solved already but still It is there and it quite frustrate a bit. I personally don’t like the brave interface cause it lacks customization options and it’s nothing unique except being a copy of chrome.

It doesn’t stand out as a different browser on first look and the reason why I’m still using because of its “adblocker” shield feature which is very good. I was interested in switching to the Vivaldi browser but it’s not good as brave when it comes to ads & trackers blockers.

Despite all of this I’m still using brave cause I believe brave will come out as the best browser. As of now, brave have a small development team and that’s why brave is taking so long to get improve.

I just hope brave sorts out their problems of the rewards system soon.

Clearly I am not alone. However, with that said I have had issues like this happened in the past. The reasoning is probably to do with Brave is a really new concept as a browser. A lot of people are experiencing payout issues with Uphold, especially where they’re trying to integrate Gemini. A lot of it has to do with back-end stuff and as a developer I can understand how tedious it is to try and fix an issue and then have five more arise.

Without a doubt, there’s a lot of frustration surfacing in the community. Which is understandable, we haven’t gotten the crypto that we deserve. Not yet, at least. Because every single time this is happened to me in the past, whether it be with issues paying out to a linked Uphold account, or the rewards captchas.

Please also keep in mind, that Braves goal is to block ads from stage one. In the initial video that Eich released, detailed phase 1 by having a Brave itself block ads natively.

Right now, we’re in the middle of phase 2. This is the part where they’re still learning a lot of the issues with the Ethereum Blockchain, and still trying to work out rewards issues, also having to deal with uphold as a company to company agreement.

Without a doubt, this stuff sucks on the user end, but again I can assure all of you that they’re working on the issue. And they’re doing their very best.

Go ahead and call me and shill, But I’ve been here since the browser itself was an early, early beta. When the ad block it self barely worked. I’ve watched it develop.

Brave still has a long way to go, however by far it is better than when I started using it.

I hope everyone gets their deserved BAT soon

They say that they have a permanent wallet linking fix on the way. It’s currently in Nightly, and will be in Stable later this month. This should resolve our issues directly.

What do you mean by that??

You mean the Gemini wallet or what?

I think they will fix the other wallet issues too…

May be they are upgrading the system it seems…