Brave has enough problems with payouts and user frustration without compounding the problem. A simple line or two of text inserted in the Brave Ads Payout status topic is a simple and easy thing to do. Inserting nothing does nothing to improve communication between support and users and if anything causes even more confusion and frustration.

As a community member who tries to help other members, NOT informing the community of this type of change is a serious omission. Basically, I have posted misinformation in recent posts and I don’t like it when it could easily have been avoided by Brave staff informing the Community that a change was made. Simple. Brave is sorely lacking when it comes to information dissemination and this instance is a major failure as far as I’m concerned.

Just a FYI. They hadn’t been changing colors on the topic like they used to, so I contacted SaltyBanana. Response is as follows: [image]

omg too funny and not in a good way. Support should have at the very minimum posted this information in the Brave Ads Payout status .

It occurred when I’ve dealt with people who were confused on the color schemes. Usually Red = Stop or no good. It’s universally seen as not moving. Green = Good, clear. Universally used as such overall. Then yellow as caution.

But yes, I did contact to advise them that I’ve had people who were confused because it was “green” but they didn’t receive their BAT. You are right that usually there should be an indicator to let people know what the colors mean if they aren’t aware, but at least the color now match with the general idea of how it’s used in life.

If you look through things in the past, you’ll see they’ve bounced around a lot. Which is why I brought it up. Look below: 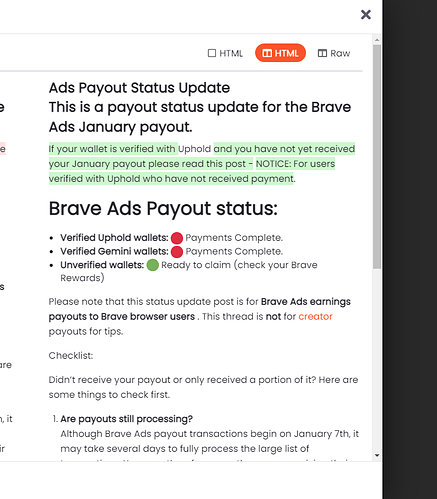 So yes, it was important to make sure that colors were changing whenever text changed. And that we can keep it solid, with whichever scheme to go by.