It’s so frustrating that the BAT keeps on decreasing everyday, I haven’t done a troubleshooting and updating the browser, I might lose my all my earnings this month.

A lot of new people are getting this kind of troubles. Just a few seconds ago, i learned that Brave delays up to 7-10 months to pay you. I see that this is a very big trouble.

Are you looking at BAT or currency value? Talking about payments or estimated earnings?

The reason I ask is when I first started on Brave, I was used to 20-30+ BAT each month and then started only to see 5 BAT each month. It was gradual at first but then quick decrease. It wasn’t until I paid attention to Uphold that it became clear what happened. The value of BAT increased. Check the screenshots below. You’ll see BAT changed a lot but the USD ( United States Dollar) amount stayed relatively the same. So pay didn’t decrease.

If you’re talking about the Brave Rewards balance, that eventually resets to 0 each month while they start to process payments. Like on my Android that I’m only using for streaming, it shows 0.00 BAT but then under Ads, if I click on Details it shows that I’ve seen 221 ads this month, estimated earnings are 1.425 BAT ($1.06 USD), etc with the next payout to be February 7. 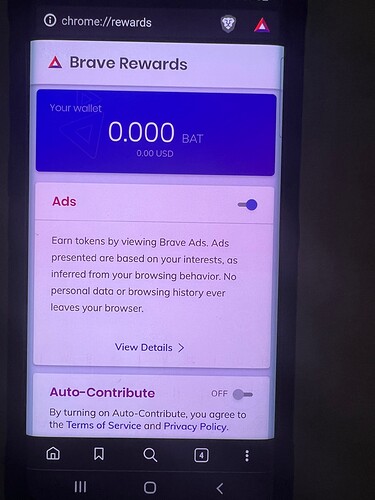 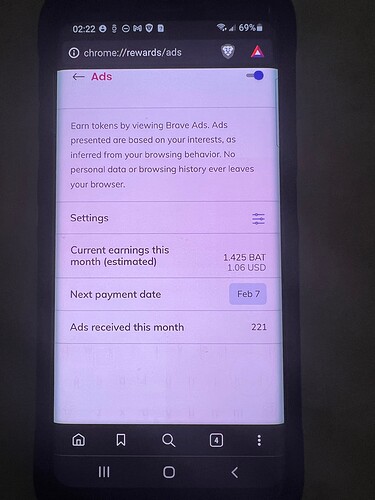 But all of that does combine to sometimes confuse people. The estimated pay out eventually changes once they are able to see how many ads that you were able to watch. In addition it’s going to fluctuate depending on the current market for BAT. The higher that BAT are trading for, the less that you will get in that payout. But when it plummets and BAT is selling for a lower price, then you’ll get more of them. If you’re monitoring on a daily basis you will see sometimes a little bit of confusion based on how volatile the market is at that time

Oh and one more little thing. Where you see that it says my wallet is $0, some might want to suggest that is my actual Uphold wallet. I just want to clarify that that wallet is your actual Brave wallet which is the money that is stored before it’s supposed to be transferred to either Uphold or Gemini. Once it starts to process between one to the other you’re generally going to see it vanish from the one wallet until both places can finish processing. It used to scare me when I saw that because I thought I wasn’t getting but I was supposed to be paid but it generally showed up within the week of that happening.

So here is a screenshot of my current BAT balance in Uphold. Obviously I’m not showing anything more than that because nobody’s business how much could the currency I have elsewhere and all. But just figured I would add this in case anybody might be confused about that.

@Saoiray One suggestion, Brave Wallet is actually referred to as Crypto Wallet Link. What you see in the image above as “Your wallet” can be referred to as Rewards Wallet.

Just wanted to clarify as many users are getting confused with Brave (Crypto) Wallet and BAT held by the browser (Rewards Wallet) both are independent and unrelated as of now.

@Aman_M yep, which is why I and others have addressed it in things like PSA: User FAQ - Support & Answers

Keep in mind that are browser has an internal wallet where vBAT is stored. Then we have the other wallets it goes to. And as you stated, Brave Wallet has nothing to do with Brave Rewards.

But yes, we do need to be more attentive to word choices and explanations so limit confusion.