All of my YT videos disappeared BUT I could get them back by clicking on them…. Waiting for a pop up that says that they’re “expired” and loading it and Voilà, it’s back. But the thing is I don’t download them, they just go back to being normal (as already downloaded because I never once deleted them) I am on a IPhone XR and I think this was caused by a few things. I was completely offline because I have no data, I was recording things while my device was almost full on storage. 62 out of 64 gigs. So I believe that Brave tried to get rid of the downloaded things to spare some space or something? But even then, I checked how much storage Brave took and it was STILL 4 Gigs. So the videos weren’t deleted. They’re still in the system I just can’t access them until I get that “expired” pop up. Someone please help me. I can’t do this for like 300+ videos!!

Wait please don’t delete my account. I don’t know how to remove that tag.

This expired thing is happening to me too, and a few hours after I refresh my videos in the playlist they also get expired again. I wish they can patch this

I don’t know how to remove that tag.

You’ll need to be mindful of what category you choose to place topics in. 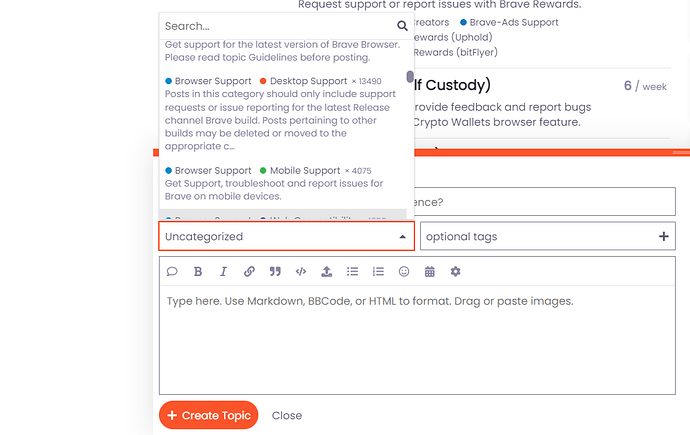 As to how to edit, you hit the pencil icon to edit posts. The same icon exists next to topics you create.

I went ahead and moved it over to proper location, which was #support-and-troubleshooting:mobile-support

I’ve seen this reported on the Japan side too, over at Braveを1.43にアプデ 後Playlistで保存していた動画が期限切れになった

Let me tag @michal to see if he can help or at least direct team to it. We’ll also have to watch that other post to see if they respond with solution in the interim.

Thank you so much! I will continue to try to get my videos back but for now it’s very much a big inconvenience rather than an emergency. I’m sure I can get this fixed soon but thank you so much for your assistance I appreciate it a lot!

Not easy to fix as the videos on the server side might update their internal url from time to time. I think the best workaround is to save them offline so they do not disappear

I just created an account to bring more visibility to this issue.

I also had some 30 ”videos” downloaded to the offline playlist from YouTube. However, a few days ago I got the same message that all of my offline videos were now expired.

I thought the entire idea of downloading videos for offline use was that they’d be offline and not require re-fetching the videos from the original source. Surely this is a bug?

We will check it out, once you downloaded a video it should not get auto removed.
The expired videos should happen if you add them in online-only mode

If it helps, these videos were downloaded on different dates. Still, for some reason, they all expired at the same time (even though they were entirely offline).

The reason why I know for certain that they were offline is because I often listened to them while my device was in airplane mode and there were no issues.

Unfortunately, seems some people are having issues where expired is showing even for those downloaded offline. It seems @MacaroniPasta is one of them, but now I guess also can see Atsushisa over on Japan side also is saying they experienced while in offline. I’m assuming they looped you in on Japan side or they have someone from the team aware, but at least linking here just in case.

Hi @Saoiray! I really appreciate your information! In my case(not only me but some users reported as same), I have downloaded videos for offline play. But those videos were also expired. I hope everything will be fine.

I also downloaded a lot of videos to play offline, and more than half of my oldest videos are all expired and require me to click on them to reopen them to bring them back into my playlist.

Is this an intentional “feature” or something where they expire after some time, or are they supposed to never expire? I was downloading a bunch of music so that I could listen to them offline, but now half of my playlist is expired so it doesn’t really work well.

I’m having the same issue, has anyone found a solut?

Yes, but I tried downloading that movie again and it worked, though it was in low quality. I think the problem was either 1) it got deleted because it had already been a couple days since I first downloaded it OR 2) I didn’t save it properly