Ads reconcilation is a lie

Since last 3-4 months we are hearing the same thing again and again, yet no solution. But first they were saying that this is just a “visual bug”. But after more and more people started to get this so called “bug” they switched it to not reconcile in the last days of the month. That way your rewards were rolling and rolling and rolling… so I did an experiment.

I turned off ads(but I could just switch off the wallpaper ads since I stopped getting pop-up ads 7 months ago; yes 7 months ago!!!) for the whole May.
On 11th of May I received 1 BAT from the April ads. It should be 1,490, but the 0.490 were transfered to the next month as we all know.

What were the expected result?

To be able to get the difference every single month that are rolling.

What was the outcome?

Well as you can see below - nothing!!! I even havent got the white box message “your X amount of BATs are coming in the Y days”. That said I probably will not receive the 0.490 BAT from the previous month.

Conclusion
I stopped believing in what they are saying. Nobody explained why the patterns of rewards getting every month are for example - 0.5, 0.75, 1, 1.25, 1.5 etc. I explained myself that this is because I am not verified neither gemini or uphold. Now they are talking about fixing the issue, but they started fixing it after sooooooo many people started to post.

Until they rework the entire system or “really” fix it I dont belive them.

Every major update there are tons of improvements for a wallet that you cant put your ads earned from the same browser!!?!?!!! What were the point to release it then? Its build inside the browser - ok I get that, its cool feature, but why we cant transfer our rewards directly to the wallet? I was waiting for implementation of Solana, but I gave up on this long time ago.

The first screenshot is showing that the date for reward is 8th June, while the second is showing that date changed to 8th July after passing the 1st June. And in the last screenshot you can see the amount of BAT I got in May. You can clearly see the difference of 0.490 BAT.

Look the problem is not getting these 0.49 BATs, the problem is that this issue is happening every single month and most important you are saying a lies 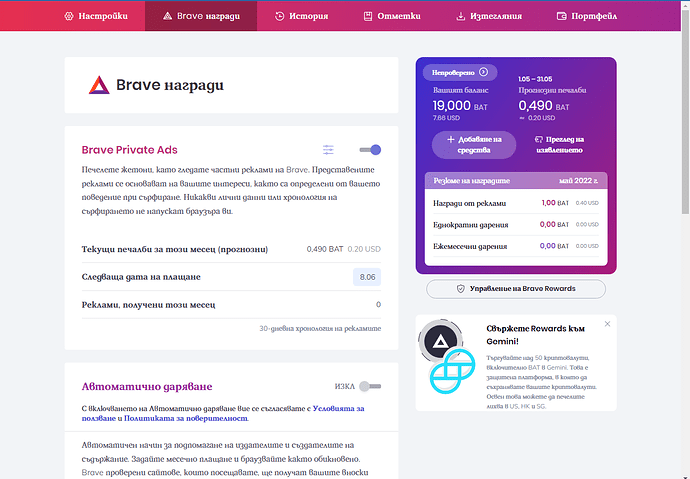 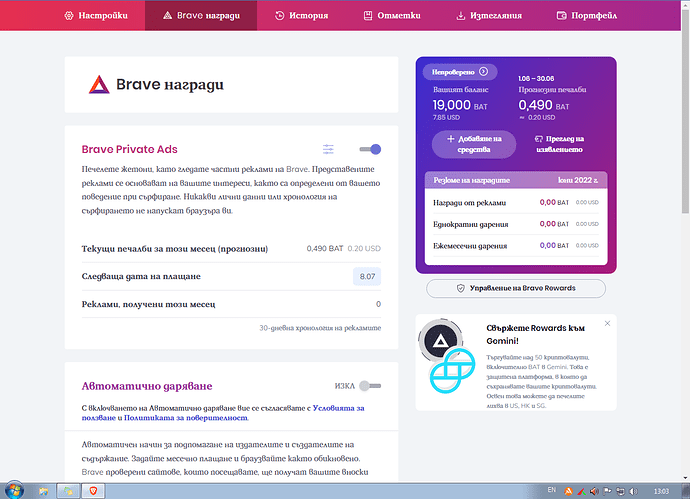 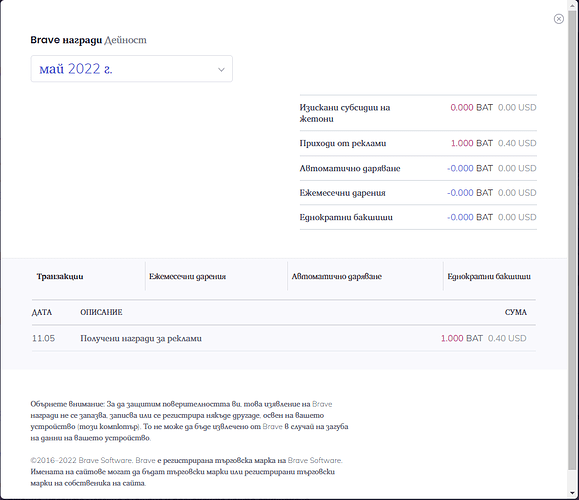 This is a serious issue.

Thanks for the experimentation.

I think brave is not able to capture some types of ads or some ads of different types. This will keep getting roll over to next months until finally it will be lost. (Yes, brave team will blame for changing the settings, uninstalling, installing the browser again)

Why i cant get my all earnings? Rewards Support

As stated earlier in this and many other duplicate threads, this is a known issue that the team is working hard to address and fix. I believe that, once fixed, everyone should receive what they are owed. Please understand that issues like this are not trivial and require time and precision to review. We hope to have this issue resolved as soon as possible. I am going to close this thread for now and will reopen it if we need more information from users or if we have any additional updates. If …

Also, I believe this is done intentionally to hype the amount bats are you are earning, even though you wont get some % of roll over bats in your lifetime.

If bat team is serious on this, they could have cleared the clutter of rolled over ads, may be on request from the serious users (people asking for the same). But they don’t care.

We do care and we are working on it. We appreciate everyones patience and understanding here as, again, these types of issues are non-trivial to resolve.

When I first heard about Brave browser 1 year ago I got really excited. For me these 3 were important things that sold me:

And when one of the core options it not what it was supposed to be it feels like we have been cheated. I really want the browser to develop something that will put it into the top 3 browsers, because I like it, but not in the current situation.